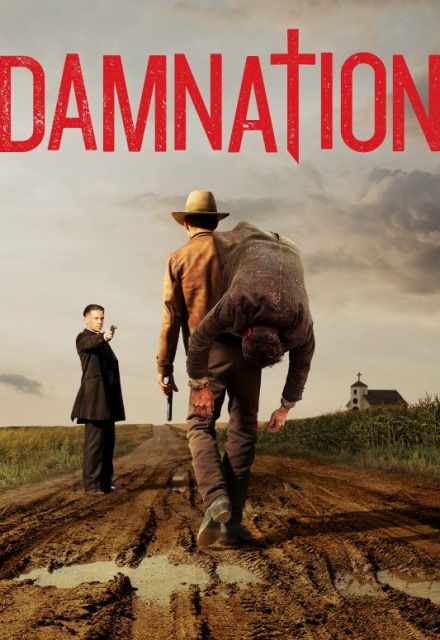 Avg Rating (0)
Your Rating
Mondays, 10:00 PM EST on USA
Tracked 562 Times
Concluded
1 Seasons, 10 Episodes
60 Minutes
Buy or StreamAmazonAmazon UK
Canceled Drama Period Drama USA Network
Set against the backdrop of the American heartland in the 1930s, the epic saga Damnation centers on the mythic conflict and bloody struggle between big money and the downtrodden, God and greed, charlatans and prophets. The pilot introduces Seth Davenport (Killian Scott, 71), a man masquerading as a small-town Iowa preacher in the hopes of starting a full-blown insurrection against the status quo. Focused on his mission, Davenport is unaware that an industrialist tycoon has hired a professional strikebreaker named Creeley Turner (Logan Marshall-Green, Quarry) to stop the uprising by any means necessary. But unbeknownst to those around them, these two men already share a secret bloody past.
Share on:

Damnation is a period drama that incorporates morals and righteousness in a battle for land. What would you do to feed your children and protect what you've worked for your whole life? Corporations are coming in and strong-handing people off their properties and making it impossible for them to support their families. In this tale, a self proclaimed preacher turns to the cloth and becomes the voice of everyone who cannot speak alone. He rallies all who will help to defeat a common threat,be it progress or damnation. This is a decent series that will entertain, I recommend this to the American history buff or period drama addict.

Never peaked my interest , not sorry to see it go !

ALL REVIEWS FOR DAMNATION »