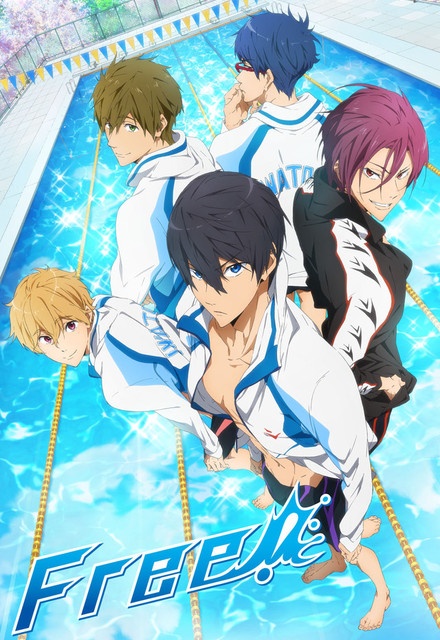 Avg Rating (4.16)
Your Rating
Sundays, 7:00 PM EST on Tokyo MX
Tracked 365 Times
Hiatus
3 Seasons, 41 Episodes
30 Minutes
Buy or StreamAmazonAmazon UK
Anime Japanese Anime
Haruka Nanase, Rin Matsuoka, Makoto Tachibana and Nagisa Hazuki are four childhood friends with a passion for swimming, being a part of the Iwatobi Swimming Club since grade school. Although, when Rin suddenly leaves to attend an elite boarding school in Australia, the group slowly drifts apart. Some years later Haruka, Makoto and Nagisa reunite with a much darker Rin, who challenges Haruka to a freestyle race. Rin wins, but with his attitude towards them still harsh, the group decide to form the Iwatobi High Swimming Club, in the hopes that they can go back to being friends with Rin like they used to.
Share on: This show is fantastic! The story is great and the art of the anime is awesome.

OMG! Free! Iwatobi Swim Club = hot, shitless guys with a sad past.
Such a great storyline and perfect for any teenage girl who wants a serious nosebleed and to fangirl 24/7!
Overall, 5 stars!

ALL REVIEWS FOR FREE! »