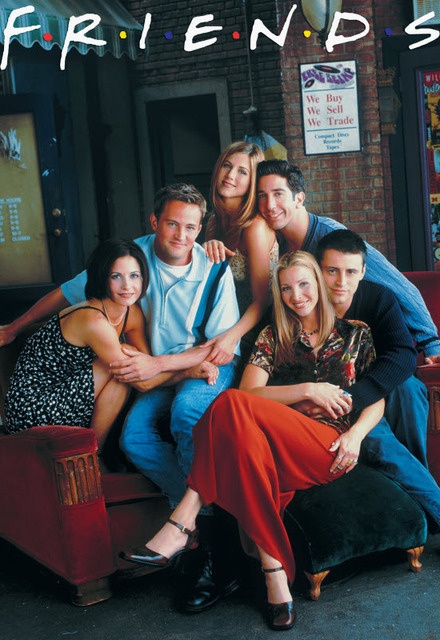 Avg Rating (0)
Your Rating
Thursdays, 8:00 PM EST on NBC
Tracked 43,967 Times
Concluded
10 Seasons, 239 Episodes
30 Minutes
Buy or StreamAmazonAmazon UK
Comedy NBC Sitcom
Friends is an Emmy award-winning American situation comedy about a group of six friends living in the New York City borough of Manhattan that was originally broadcast from 1994 to 2004. It was created by David Crane and Marta Kauffman, and produced by Kevin S. Bright, Marta Kauffman and David Crane. One of the most popular television series of all time, the show has been broadcast in over one hundred countries and still continues to attract good ratings for its repeat episodes. The final episode of the show remains one of the largest in terms of television audience numbers in the U.S.
Share on:

Could this show BE any greater???

Made me laugh and cry, so funny! :) its about friendship and love and other things in life ♥

This is definitely one of the best shows ever. Each character is unique in their own way, but they all mesh really well together. The writers and creators of this show really knew what they were doing when they decided to give this show a chance.

Everything came together in this show, the actors timing, the writing, the cultural zeitgeist, all conspiring to make it one of the biggest sitcom hits and also a really, really funny show. There are still a few seasons I haven't seen - saving them for a rainy day. Hey, We're on a break!!!!!!! :P

Friends is definitely the mother of sitcoms. Although lots of shows tried to copy it I still think there's no show quite like it. I never get sick of it no matter how often I rewatch it. This is a show that instantly makes you smile even when you're really down. It's amazing how much attention the show still receives even today. You don't know TV if you haven't seen it. This is one comedy show you just can't miss ,period!!!

The one better than HIMYM

An iconic series that will never officially be over (especially in Europe, where re-runs are aired on prime time!). A story of the ups and downs of friendship, family, work, relationships, and life as a whole. And the advice still rings true today! But am I the only one who wishes Rachel didn't end up with Ross? Personal preference, I suppose. Friends is a legendary show from which all other shows came to be.. i have to say that it was amazing and always a pleasure to watch and it didnt matter where you were, in the end the friends are something we always aspire to have them in our lives and my favorites were Phoebe and Joey - the goofballs of them all and Central Park cafe which became awesome.. :)

Still the best sitcom ever! With still my favourite TV couple Ross and Rachel. You fell in love with the characters and their relationships with each other. Through 10 seasons the show stays funny on a high level. This show never gets old. It is always fun to watch an episode.

Best show I have ever seen. Have re-watched it four times.

That's that kind of show that you can't get tired of, you watch again and again and laugh again and again with the jokes. The cast is completely amazing and charming, they made a wonderful work together. Just... Watch it! You won't regret, is a fantastic show.

Friends is probably one of the best sit-coms of all time (proof of this might be the fact that my mom has watched the show about 4 or 5 times all the way through, sometimes back to back even). great characters, great comedy, and it never really got old even for going on for 10 seasons. One of the rare shows that went out on top and in their own time. Could've easily went for 1 or 2 more seasons but they were smart and didn't overstay their welcome.