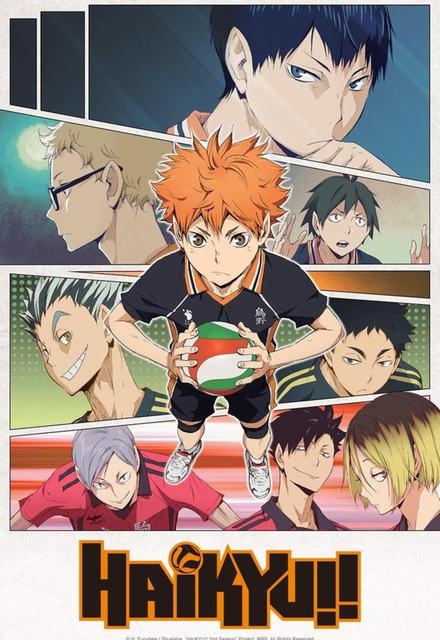 Avg Rating (0)
Your Rating
Fridays on MBS
Tracked 760 Times
Concluded
3 Seasons, 60 Episodes
30 Minutes
Buy or StreamAmazonAmazon UK
Anime Hobbies & Lifestyle Japanese Anime Sports
Inspired after watching a volleyball ace nicknamed "Little Giant" in action, small-statured Shouyou Hinata revives the volleyball club at his middle school. The newly-formed team even makes it to a tournament; however, their first match turns out to be their last when they are brutally squashed by the "King of the Court," Tobio Kageyama. Hinata vows to surpass Kageyama, and so after graduating from middle school, he joins Karasuno High School's volleyball team—only to find that his sworn rival, Kageyama, is now his teammate.
Share on:

This pretty amasing. Even if you're not hat into volleyball, there is still a lot of excitement involved and some upsets as well making it very intriguing to watch. Well made great story line. lots of action. Loved it. Haikyuu! is one of my favourite animes, as it is so entertaining. You become emotionally attached to the characters, and learn so much about each and every one of them. I hate sports, but I love sports animes, so it doesn't matter if you like sport or not... just watch it!!! :D

ALL REVIEWS FOR HAIKYUU!! »