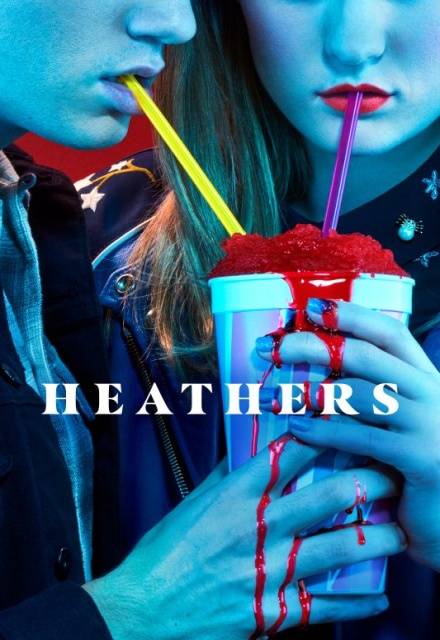 Only the pilot was aired, but there are 10 episodes that were filmed and leaked online after the cancelation.

Its basically a re-imagining of the 1988 Heathers movie, with every plot point and character flipped or switched in some way to make it a new story. The gorgeous slim rich girl bee-atch is a fat homely rich girl psycho bee-atch. The jock who was accused of being gay... really is gay. One of the 'Heathers' is a transvestite. You get the idea. Its actually fairly well done, but if you like the original, it will take some getting used to.

I applaud the writer for the substancial feat of rewritting a beloved dark comedy-drama, but the 5 episodes I watched (which appear to conclude the story arc) definitely go downhill after the pilot. The dialog includes almost all of the classic Heathers one-liners, but used in different contexts. At times this seems forced, like the writer had a list of ideas to include and he was going to get them to fit in there somewhere even if it didn't meld perfectly. Where the original movie flows, the series jerks along in fits and starts. Where the original was at least plausible, the series is hyper-reality... more of a long dream sequence than a movie.

The social commentary is still there and it is far more biting than the original, but where the original was dark and ironic, the series is sensational for no reason except to try to shock you. Like a lot of things in society today, the characters are soo extreme that one could think a Reality TV host could become Fake President, totally un-believable.

One amazing aspect is that the young woman playing the Veronica character, originally played by Winona Rider, actuallly sounds like Winona Rider at times. Its hard to tell if its dubbed or if she is just mimicing her voice, but the effect is eeriely brilliant and pays omage to one of Rider's hay day roles.

UPDATE: I watched episodes 6 to 10, and the show def gets better in the second half of the season, the social comentary is more biting, especially the active shooter episode... yeah, why don't the school shooters wait until everyone is together in the auditorium or cafeteria?? I love that the hero is the villian and he loves her for being a killer like himself. Its a shame this was not released so everyone with a brain could enjoy the poignant commentary. The ending is a rather sickening christian heaven/hell parable, which was stupid and they could have ended it in a much better manner without the religiosity. I deducted a whole star just for that mistake. It looked like they were going to do some kind of reincarnation thing for the next season, like the same horrible people have lived in the past and are rinsing and repeating. Again with the religiosity BS. Not a bad thing it was canceled, but I feel it was canceled for the wrong reason. Good series, it got a full official release in Australia on streaming site Stan. At first it just ok but The last half is the better half. Surprised to hear that it didn't get a wider release initially. Good dose of social commentary. And dark humor.

ALL REVIEWS FOR HEATHERS »