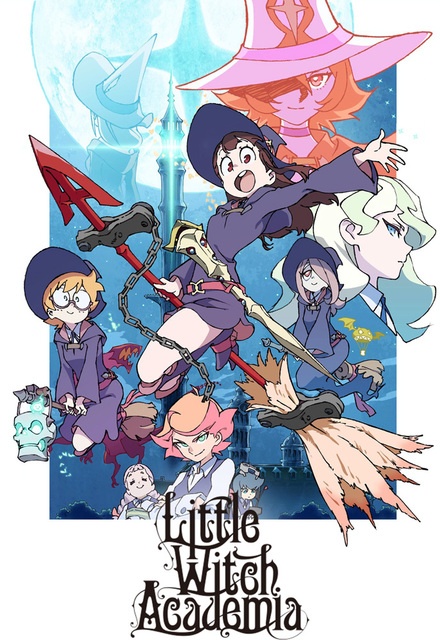 Hiatus (Japan), Hiatus (Online)
2 Seasons, 25 Episodes
30 Minutes
96 tracks
Buy or StreamAmazonAmazon UK
Anime Japanese Anime
Little Witch Academia takes place at Luna Nova Magical Academy, a prestigious school for young girls training to become witches. Having been inspired by a witch named Shiny Chariot, a girl named Atsuko ("Akko") Kagari enrolls at Luna Nova Magical Academy to become a witch, but struggles due to her non-magical background. This all changes when she discovers the Shiny Rod, a powerful magic relic left behind by Chariot. One of the main themes in the franchise is Akko trying to live up to Shiny Chariot's ideals by showing the world that magic is still a wonderful thing, while Luna Nova struggles for its continual existence because the general public regards wizardry as outdated. In the TV series, this background element is expanded into a plotline in which magic is waning across the world. The secret to restoring the flow of magic lies within the forbidden Arcturus Forest, sealed inside a magical locale named the Grand Triskelion erected by the Nine Olde Witches, the legendary founders of the academy. The key to undoing the seal lies in a sequence of seven magical words and the Shiny Rod, an artifact which reacts only to the wielder's genuine desire to spread joy and happiness. When Akko gains possession of the Rod, Chariot (secretly one of her Luna Nova teachers and the Rod's previous wielder) tries to guide her on the path to restoring the power of magic to the world. However, Croix, Chariot's former best friend, had also coveted - and was denied - the power sealed within the Triskelion due to her selfish ambitions. As a result, she schemes to unlock the Grand Triskelion using her technomagical abilities, willingly tapping into dark powers in the process.
Share on: