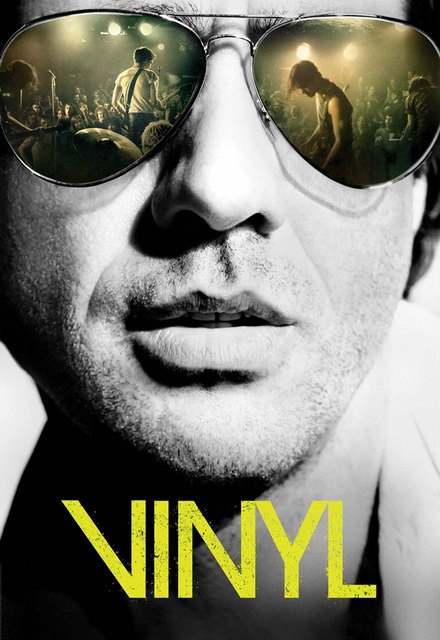 Finally, a show that is not about lawyers, crime-fighting or depressed housewives. An intriguing insight into the world of the music industry during the 70s, with all the sex, drugs and rock 'n' roll that you would expect it to have. Highly recommend this show!!!
EDIT: Unfortunately the show slowly lost its charm as it progressed, subsequently it has been canceled by HBO The dark, organized criminal setting of Martin Scorsese is infused with the gritty, rock and roll ambiance of Mick Jagger.

The editing, cinematography, and music in the show are all spectacular. While Vinyl does clearly rely heavily on this sense of style (which it excels in due to amazing production values), it also does feature a compelling story set around the diverse and evolving music industry in NYC during the 1970's.

Bobby Cannavale is fantastic as Richie Finesta, a record company executive who began his career in the music industry because of his love of music which in turn gave him a good ear for talent. However the greedy, dehumanizing elements of the corporate aspect of the industry have disenchanted Richie to the point where he now views musicians merely as products.

The trials he faces as a business man in the music industry are interesting to behold, from loudmouth rock stars to borderline crazy, drug- addicted radio personalities, to foreign business partners.

The corporate side of the industry is contrasted well with the artistic nature of the music itself. The powerful and inspirational effects of good music are demonstrated in a flawless fashion during a few distinct scenes. Crowds go wild to the revolutionary sound that was the epoch of punk rock.

The concept of being "in it for the music" vs "selling out" is also a reoccurring theme seen in Vinyl. The heart and soul of a good musician longing to sing the blues outweighs the temptation of selling out to a big record company. Richie's thrill of discovering new and exciting artists is at odds with his plan to sell his record company.

The themes depicted in the pilot episode of Vinyl are exciting and clearly come from an experienced eye (Jagger's). This makes the show all the more exciting to behold. Only time will tell if they are built upon in a manner as compelling as that seen in the premiere.

ALL REVIEWS FOR VINYL »