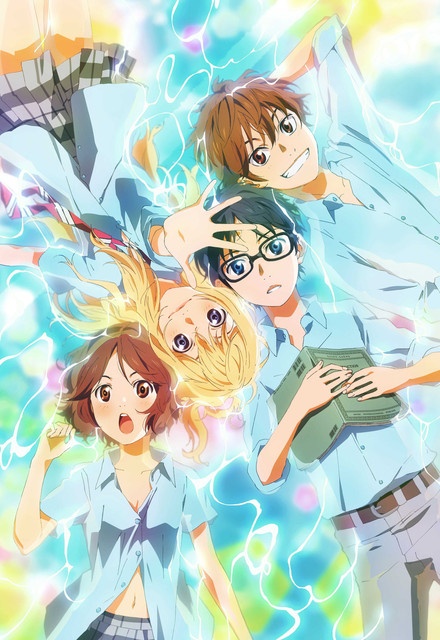 Your lie in April

Avg Rating (4.13)
Your Rating
Thursdays on Fuji TV
Tracked 493 Times
Current
1 Seasons, 22 Episodes
30 Minutes
Buy or StreamAmazonAmazon UK
Anime Japanese Anime
Piano prodigy Kousei Arima dominated the competition and has become famous among child musicians. After his mother, who was also his instructor, died, he had a mental breakdown while performing at a piano recital at the age of eleven. As a result, he is no longer able to hear the sound of his piano even though his hearing is perfectly fine. Two years later, Kousei hasn't touched the piano and views the world in monotone, without any flair or color. He has resigned himself to living out his life with his good friends, Tsubaki and Watari, until, one day, a girl changes everything. Kaori Miyazono, a pretty, free-spirited violinist whose playing style reflects her personality, helps Kousei return to the music world and shows that it should be free and mold breaking unlike the structured and rigid style Kousei was used to.
Share on:

this looks awesome...personally am not a music die hard but this just drew me in loved it. Downside there isn't anymore after this

This is the first anime I have ever watched and what an amazing way to start ! This anime is so touching, I loved the characters and the storyline. It simply makes you appreciate life more.

ALL REVIEWS FOR YOUR LIE IN APRIL »