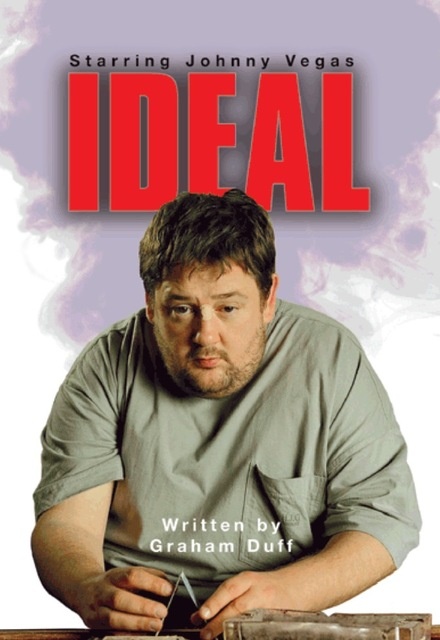 Avg Rating (0)
Your Rating
Mondays, 7:00 PM EST on BBC Three
Tracked 578 Times
Concluded
7 Seasons, 53 Episodes
30 Minutes
Buy or StreamAmazonAmazon UK
BBC British British Comedy Comedy
Ideal is a British sitcom originally broadcast on digital channel BBC Three, created by Graham Duff and produced by BBC Comedy North and Baby Cow Productions. It stars Johnny Vegas as small time cannabis dealer Moz. The title of the series is a play on "I deal". The closing theme is Song of the Oss from the album Nuada: Music Inspired By the Film the Wicker Man composed by British band Candidate. It is set in Salford, Manchester chosen because Duff was familiar with the area having done many stand-up gigs there during his youth.
Share on:

Avg Rating (0)
Your Rating
Jenny is in a coma and seems to see the world as one big song-and-dance routine in a series of dream sequences, and Moz receives a string of visitors - all of whom believe they can snap her out of it.

Another iconic series that influences my thinking in my teenage years.

In the UK, this series had a cult following - and still does. I've never understood that, and I'm an English SF fan..
It's a story of a groups of misfits (including a charismatic anti-hero) who escape from an oppressive regime, come upon an advanced spaceship which bonds to them, and fight the system under their titular leader.
Some excellent actors did their best with a low budget, shaky scenery, awful special effects (even for the time) and a plot that went nowhere, and an unsatisfactory ending.
This could have been so much better, but suffered badly from an insufficient budget, like the original Dr Who when it was stumbling towards cancellation.