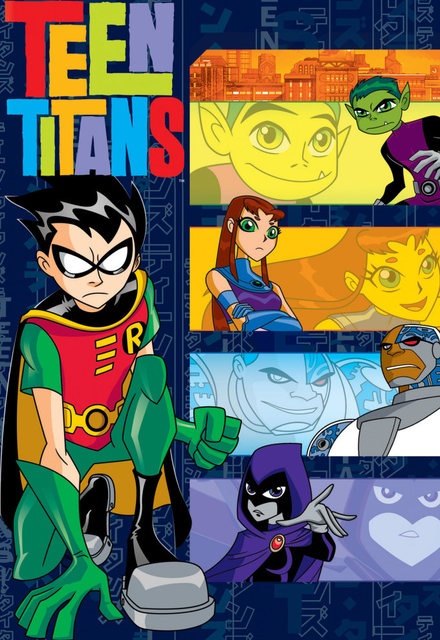 Avg Rating (0)
Your Rating
Mondays, 7:00 PM EST
Tracked 2,660 Times
Concluded
6 Seasons, 66 Episodes
30 Minutes
Buy or StreamAmazonAmazon UK
Action Big Kids Canceled Cartoon Network Cartoons & Animations Superheroes
The Teen Titans are five heroes under one roof. Their names: Robin, Starfire, Raven, Cyborg, and Beast Boy They live in a large tower in the shape of a T that they call Titan Tower. No secret identities. No school. Just superheroes being superheroes. They must go up against their arch nemesis, Slade, and his evil minions. What he really plans to do is unknown but one thing's for sure... he's an evil madman.
Share on:

Teen Titans S5E11
Avg Rating (0)
Your Rating
The final game has begun. While the Titans are spread out throughout the globe on one last mission, Brotherhood mastermind, the Brain, makes his move. Robin has a strategy of his own, but as all the villains begin taking down all the superheroes all at on

i loved this show,,Hewitt so pretty hahahaha Based on semi-true experiences and tales from a real psychic, the show follows Melinda Gordon (Hewitt) with her backstory as a clairvoyant who can see and talk to earth-bound spirits since childhood to her marriage and life in a sleepy town where she manages an antique shop.

It is through the shop that she meets these ghosts and some of their "unfinished business" counterparts (family, friends that are still living) that Melinda works through and with to help send the ghosts "into the light" and bring peace to both parties.

The show lasted for many seasons on CBS and did focus initially on a "ghost of the week" storyline, until the stories started to turn into more of a direct connection to Melinda and her family/friends on the series. The last few seasons really focused on this and connection to her son who possessed the same, if not greater abilities as Melinda.

A very low-key show in the way of any sort of horror, but still could bring the creep and scary factor for the light-hearted or unsuspecting viewer. Overall, the cast seemed very connected and true to their characters and brought a lot of depth to the episodes and plot lines and carried a basic promise that you are not alone and that love is the everlasting bond that connects us.

I enjoyed this, it was light, easy viewing but compelling at the same time.

Great, awesome paranormal show. Jennifer Love Hewitt is excellent as someone who helps people who's being haunted by ghosts almost as if she was born for the role. Spooky, suspenseful and sometimes scary, Ghost Whisperer is a very emotional show too that will make you shed a couple of tears right to the end.