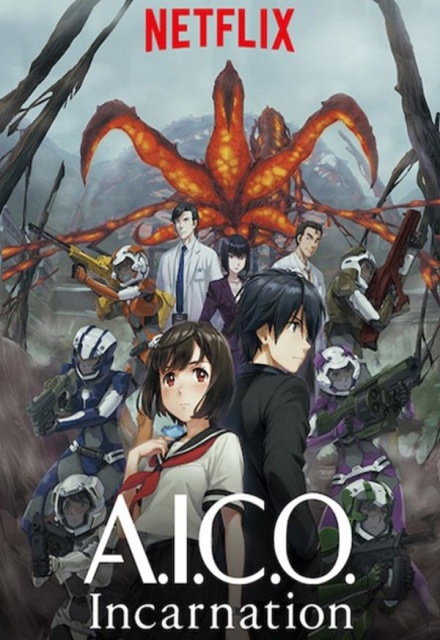 Avg Rating (3.38)
Your Rating
Fridays, 3:01 PM EST on Netflix
Tracked 33 Times
Concluded
1 Seasons, 12 Episodes
30 Minutes
Buy or StreamAmazonAmazon UK
Anime Canceled Japanese Anime
In Japan in the year 2035, an accident known as the "Burst" occurs during a research project, spawning an out-of-control artificial life form called "Matter" that has spread throughout the Kurobe Gorge. The research city that was once hailed as the hope for humanity is cordoned off by the government. Two years later, 15-year-old Aiko Tachibana, who lost her family in the Burst, learns something unbelievable from Yuya Kanzaki, a new student at her school. A secret is hidden within her body, and the answer to the puzzle lies at the "Primary Point" that was the center of the Burst. Aiko resolves to infiltrate the restricted area, escorted by a team of divers and with Yuya as her guide. When boy meets girl with the fate of humanity in their hands, what new truth will come to light? The series comprised of 12 episodes is produced by Bones, whose notable works include "Psalms of Planets EUREKA SEVEN" and "My Hero Academia." The series will debut globally on Netflix in Spring 2018.
Share on:

I thought I might like this anime (even though I rarely have watched anime) as I like android stories. It even has similarities to Ghost in the Shell, which has a lot of flaws but was a good story, especially the Stand Alone complexes.

For one thing, I just hate how japanese anime make the girls with giant doe eyes and they are always dumb as sticks and constantly asking guys to help them. There is almost always an underlying misogyny in everything japanese when it come to female characters. Oops, my skirt wet up and I'm wearing pink panties.

The first episode was ok, but the second episode starts off by explaining the plot for 5 minutes, which is a japanese story telling idiocy. For some reason, the japanese can not learn the simple fact that you have to SHOW and not TELL the story.

Are you interested in watching this show? Ok, let me ruin it for you by explaining it to you like you are a 5 year old. Cue the girl acting stupid.

ALL REVIEWS FOR A.I.C.O. INCARNATION »