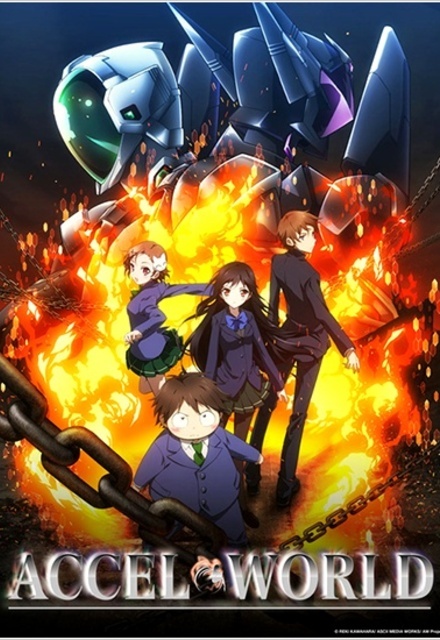 Concluded
1 Seasons, 34 Episodes
30 Minutes
62 tracks
Buy or StreamAmazonAmazon UK
Anime
Haruyuki "Haru" Arita is a short, fat boy who is constantly bullied at the Umesato Junior High School which results in him having exceptionally low self-esteem. To escape the torment of real life, he logs onto the school's Local Network where he plays squash by himself and always gets the highest scores. One day, he checks the squash rankings to find his high score beaten by Kuroyukihime, the popular Student Council Vice-President, who invites him to lunch the next day. Here Kuroyukihime introduces Haruyuki to Brain Burst, a secret program that is able to accelerate the human cognitive process to the point at which time appears to stop. Haruyuki soon learns that Brain Burst is more than just a program, but a Virtual Reality Massively Multiplayer Online (VRMMO) Fighting Game where people fight each other in fierce duels in order to obtain Burst Points which can be expended for acceleration abilities in the real world. Kuroyukihime then enlists Haruyuki's help in reaching Level 10 within Brain Burst by defeating the "Six Kings of Color" to ultimately meet the creator of Brain Burst and learn its true purpose.
Share on: