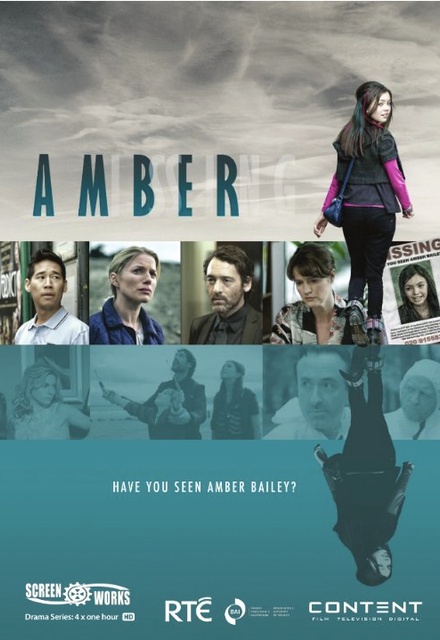 Avg Rating (0)
Your Rating
Sundays on RTÉ One
Tracked 51 Times
Concluded
1 Seasons, 4 Episodes
60 Minutes
Buy or StreamAmazonAmazon UK
Crime Drama Mystery
The disappearance of 14 year old Amber Bailey sets off a two-year search during which her family will go through unimaginable pressures. As the days, months and years progress the mystery deepens, and strange and terrifying clues come to light, raising yet even more questions. The world becomes gripped by the mystery of the missing teen. What happened to Amber? Set in Dublin's suburbs, with it's massive empty modern office blocks, Amber's parents Ben and Sarah are recently separated getting on with their lives. Everything changes, however, when Amber fails to return home and it turns out she never turned up at her best friends' house that afternoon as arranged. As her family search for her, their sanity will be tested in the harsh public glare of the media spotlight.
Share on:

Focusing on the family of a missing teen. By the last episode I was hoping she would just be dead. A long drawn out show with no real ending. When kids go missing, they're just that... missing. No explanations given, no conclusion, just what the F happened to Amber?

This series should come with a warning label: "will elevate blood pressure".

If I'd bothered to read the reviews of Amber before watching it, and if I'd known of the [SPOILER] that seems to throw everyone into a rage once it's over, I might still have watched it, just out of curiosity. And then I would have been really annoyed with myself for not listening to the reviewers. Instead, I went in all unknowing, and can direct my annoyance firmly at the people who wrote it.

Does it have any redeeming qualities? Sure, some. Let's see: Amber's hair/outfit is cute, which is good because you get to see it over and over again. Um. The actor who plays her dad is easy on the eyes... ?

OK, if I'm to be fair, he and the rest of the cast were perfectly decent-to-good, possibly great, actors. Unfortunately, it was hard to focus on the acting through the terrible plot, which had me alternately bored to tears and confused by a sloppily constructed nonlinear narrative which, despite its twists, turns, and fake-outs, failed to disguise some unforgivably large holes. I will grudgingly admit that the mother's emotional journey was quite well handled -- but the father's was so ludicrous that it overshadowed the nuances of her grief.

The writing does not even succeed in its main (purported) intent: to show the effect of Amber's disappearance on the town and community in which she lives. Yes, we do explore the effect it has on her parents; we also see (in brief bits and pieces) its effect on the parents' best friends. But events in the lives of the two Garda police investigators in charge of the case are dealt with perfunctorily (almost as though the writers were as bored by their one-dimensional characters as I was), a B-plot involving an illegal immigrant (which fails to tug at the heartstrings, though it should) is borderline unbelievable and largely isolated from the main storyline, and any further effects on the community at large are merely tantalizingly hinted at, then left dangling.

This is in fact the crux of what is wrong with Amber: it presents us with individual, isolated strands of plotline -- some, perhaps, even quite good. But unlike other shows of the genre (namely Broadchurch and The Killing) it makes no attempt (and I mean, NO attempt) to weave these strands together into the multilayered, complex, and compelling tapestry we've come to expect.

Never mind that one strand that will have you seeing red...

ALL REVIEWS FOR AMBER »