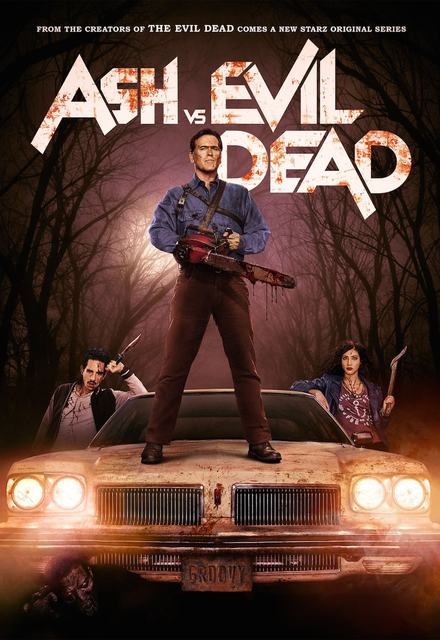 If the rest of the series holds after the first episode (updated: and it does), I'll love it and anybody who seen the movies will too. It has zany one-liners, comedic slapstick action, blood splattered effects (I hope the cast love showers) and off course, Bruce Campbell. Here is the boomstick, baby.

A show for fans of the original Evil Dead trilogy and newcomers alike: the perfect mix of laughs, scares and gore.

This is My Boomstick, Oh Yeah Baby. Horror with a side of zany, slap stick, one-liners, and Bruce Campbell. If you enjoy all or some of these, you've found the droids you were looking for. As someone who never saw the movie, this first episode gave you exactly enough backstory to know what went on without feeling like you need to go back and watch it. Can't wait to see more. The show is really great. it is really hilarious and man the director wants to keep it so realistic.

Jeesh, Could this be any lamer? I didn't even get through the first 10 min. without wanting to do anything but continue watching.

Ash vs Evil Dead is a horror tv show following up on the Evil Dead Movie franchise. Ash Williams found a develish book and upon opening the book a sort of small zombie apocalypse erupts. It's up to Ash to make sure that the town, and also the rest of the world does not fall to these zombies. Good character synergy, exciting horror scenes but not too spooky (so ideal for me) and a bit of humour in between that is Ash vs Evil Dead. The horror scenes are not that amazing in CGI but I think that's for comedic value en also so that people like me can enjoy horror without wet pants. Love that Bruce revived his role as Ash. Its slacking a little bit when comparing to the movie, lets hope season 2 picks up the pace.

Looking forward for the show but barely half of fist episode was enough. I just found it too ridiculous and could not go further.

Love it very much! Fan of the movies and now the series! Good idea adding more characters to the story... Love them all! Bad is that the episodes only have 20 minutes for episode! Wish it was 40! Fun to see and very good music!!!

Ash Vs Evil Dead is exactly what it was suppose to be; cheesy acting, lame punchlines and mediocre animations. The jokes aren't funny enough, the evil dead not scary enough and the cast not talented enough. Watch it if you must but I recommend you don't waste your time. This show is the bomb.com!!! I am so happy that it was renewed already, too!!! Sooo much gore, I love the makeup effects, the special effects are still funny and Bruce Campbell IS the show!!! :)

It's gross, it's silly, it's disturbing. Most of all, it's just fun. Take off your thinking caps and just go along for the ride...

okay, judging by the first episode, it looks like its going to be an okay show, I love the film series but my fav of them was the first film, and this series seems to
take from the comedy of the 2nd and 3rd films.. which I was really hoping they would NOT do and go for the 1st film's type of acting and seriousness, but hey ho!
it's Ash, i'll take whatever they give us.. I just really hope they don't overstep the stupidness of the comedy and make it TOO predictable and eye rolling cringe-worthy.

The film series has such a fan-base it's unreal, so i'm sure whichever way they decide to go with this show.. it won't really matter, cos it will more than likely be a hit.
The producers of the show seems to have given the FX an awesome look and looks way real on most of the action scenes with the blood, gore, etc which I was expecting
it to be toned down as it's a tv show.. but man! glad I was wrong. Lucy Lawless is an added bonus, love her stuff she does, been a fan of hers for a VERY LONG time and i'm
looking forward to seeing her be turned into a deadite, cos you SO KNOW that's going to happen, she's gonna look great.. HAHAHA!

As a series premier goes, and to what a fan would expect, I think they hit the mark, so i'm gonna give this show a rating of 4* for now, lets hope the following episodes will
change my rating to a full 5*.. but I dunno?.. I think the slap-stick-tongue-in-cheek comedy might get used a little too much and it will start to become very boring, bring on
the rest of the show and let's see if my worries/predictions for this show are correct. :)

Not precisely my cup of tea, but I think the show did a good job of translating Evil Dead and Army of Darkness to the small screen.

What a way to ruin an amazing series, an entire beloved cult franchise, AND a beloved B actor all in a single short season. Not a fan of anything Campbell or Raimi any more. This show is so far the best representation of fan service I've seen. Captures the essence of the films without losing any substance. Hail to the King!﻿

All in all a good deal of fun that deserved more support than it received and whose brand will forever hold the championship mantle of gore-horror-comedy...after all, they created it. Technically unbelievable, with some of the better practical and digital effects of recent memory. Bruce Campbell remains a treasure, and I really hope he and the cast had as much fun as the show looked because I certainly did. Not solely blood, but personality, oozes from this short lived series which, in the tradition of the evil dead family (ahem, except for the pretentious remake) is destined for cult status. It says something truly poignant about the talent involved in a show when it doesn't take it self seriously at all, yet is more entertaining, and makes you care about the destiny of the characters, than those that pour millions into realism yet feel utterly hollow. I don't feel sad about the show ending because it has proven it's point. Bruce , the Raimi's and their incredible supporting army of darkness are the kings and queens of the terrifyingly hilarious, blood soaked feel good underworld of film. Hail to kings baby!!!! From the old days of Evil Dead, through Burn Notice, and now with Ash vs. Evil Dead, I am a huge fan of Bruce Campbell.

This show is one of my favorite things to watch. I should probably call it a guilty pleasure, but I don't feel guilty at all. Horror Comedy at its best. It seems like the show, right along with Ash, has matured over time and really found the perfect blend of, well, everything. Great casting and fun writing. Couldn't ask for more if you're a fan of horror, comedy, and fun (unless you have a weak stomach).

It's a bummer that this has been canceled after 3 seasons. This was a fun group of characters and a fun show to watch. I will miss it.