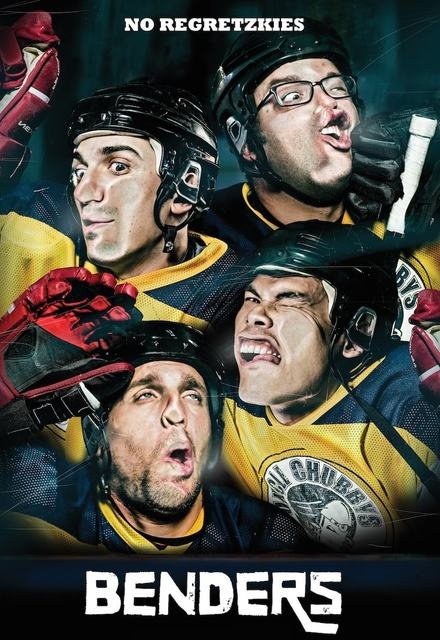 Avg Rating (0)
Your Rating
Thursdays, 10:00 PM EST on IFC
Tracked 299 Times
Concluded
1 Seasons, 8 Episodes
30 Minutes
Buy or StreamAmazonAmazon UK
Canceled Comedy Hobbies & Lifestyle IFC Sports
Benders follows a team of friends bonded by an irrational obsession with their men’s ice hockey team, The Chubbys. Paul Rosenberg (Schulz) is the insecure leader whose involvement with the team causes daily havoc for him and his wife Karen (Broad). Along for the ride are Paul’s best friends Anthony (Distefano), the charmer who schemes his way through life; Dicky (Gessner), the wealthy hedge fund manager whose answer to everything is in his wallet; and Sebalos (Iskandar) the slacker on a misguided search for his purpose in life. While their hockey skills may be limited, their passion is not, as evidenced by the chaos their devotion to the game creates in their everyday lives.
Share on: Pretty funny, but probably not funny enough now it's cancelled :(

This show was going for crazy, outlandish humour that makes you laugh at the sheer ridiculousness, emulating the Hangover and others. However, it fell well short and delivered immature, coarse, often gross jokes that never landed and made it hard to watch.

mildly entertaining comedy about a group of 30-somthing man children that play hockey.

what a little gem! This show is a real surprise. It has an almost 'fly on the wall' feel to it, and is actually really funny! I struggle with telling people about it, because it feels like its mine, a little secret that i know (should) will one day become common knowledge, but I want the self satisfied feeling I know i'll get when everyone else finally comes round to it, and I can do the 'I knew about that show MONTHS ago!' thing. Recommended, but only to people who are good with secrets! ha ha it is funny. not the best show but good entertainment

Bored out of my mind... untracking.