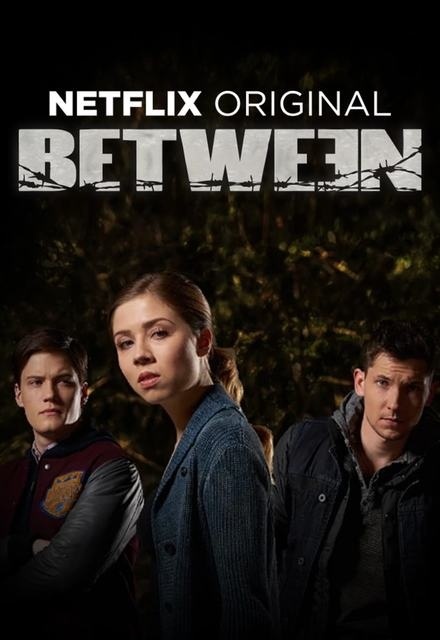 Avg Rating (0)
Your Rating
Fridays, 3:00 AM EST on Netflix
Tracked 4,288 Times
Concluded
2 Seasons, 12 Episodes
60 Minutes
Buy or StreamAmazonAmazon UK
City Drama Futuristic Netflix Post-Apocalyptic Teen Teen Drama
Between is the story of a town under siege from a mysterious disease that has wiped out everybody except those 21 years old and under. The series explores the power vacuum that results when a government has quarantined a 10-mile diameter area and left the inhabitants to fend for themselves.
Share on:

I really couldn't get into this. I thought the acting was horrible and they didn't do a good job setting up the premise. So first there was the Dome and then Finding Carter. So Between sits in the middle ! I am not sure if I have the patience for another teen rebellion stuck in a small town show ...
Of course Strike Back will be later in the year ...

Between is a sci-fi epidemic show where a single town has been quarantined. Everyone over the age of 21 is dead, and as the young are left to fend for themselves madness ensues. This show is fun to watch and has a lot of young actors you'll recognize. Definitely a Netflix worthy show!

Sorry, yet another tv show for teens. Not for me. Truly horrible acting. But i'll give it a few weeks! The story is interesting. First Season was a bit slow and acting was substandard but it was still a good story.
The second season really picks it back up and makes the show worth watching.
Hoping to see this get a Third season.

What and interesting premise for a show. It has a bit of a "Lord of the flies" feel to it.

I thought it would have been a good show to watch for the summer. Great premise, but the idea is not fully fleshed out at all. It's too cliche as well....Hey, let's do all the shit we couldn't cause there were adults around. Sigh. Characters are irritating as fuck. I know they're young and all but some of the actions are so "tv high-school". Not to even mention the soldiers at the beginning. After they agree to let the guy go back to the community, they give him his gun back?I'd think they have enough to worry about already, no?

Acting sucks. Characters too annoying to invest any emotion into. Can't bring myself to watch episode 3

This is something to watch ONLY IF there is absolutely nothing else on... it isn't horrible, but there's a reason this airs in the summer when lower ratings are a given.

This show is for the young crowd teens, that of which I'm not. Just couldn't get into it.

The show has a very slow start in the first season, thought the acting was a little bit shy of what I would expect, but a good plot make the show at his best and season 2 started quite well so hopefully the show will demonstrate some promising new episodes.

This show is so bad it's hilarious. The premise is cool but the execution is just terrible. Still funny to watch though.

An addictive show following the residents of Pretty Lake, and a virus outbreak that seems to be killing everyone over the age of 22. Loved the pilot, watched the first two seasons within 3 days. Fantastic.

a Bit of a different Twist for a Mystery & Thriller. Kind of a Slow Start, but I feel the Show will gain as the motion of the Series increases. Acting is Good, Story-Line is believable, FX effects not to bad. Entertaining for the Most Part, but a bit slow in parts, yet it does pickup. Looking forward to next Episode.

Finally got around to watching this show, and man, was I hooked, 2 seasons over 2 days, I couldn't stop watching. I REALLY hope they renew this for a 3rd season cos the way they finished off season 2 was an.. "OMG!" moment.

1st season,the story was promising,then got so hard to watch,the acting that was the problem,they made so teenagey-tv-like,without any...any feelings,like going through the motions,robots like.
Sad to watch.
But.....2nd season is a very different thing!
They fixed all "bugs"
Acting,character's personal stories,they are humans,they feel they act like ones.
Watched the whole season in 1 go!Thats considering they did kill a couple of main characters, but it still works.
Hope the 3rd season happens and won't disappoint us.

Not too bad, the 2nd season was way better.