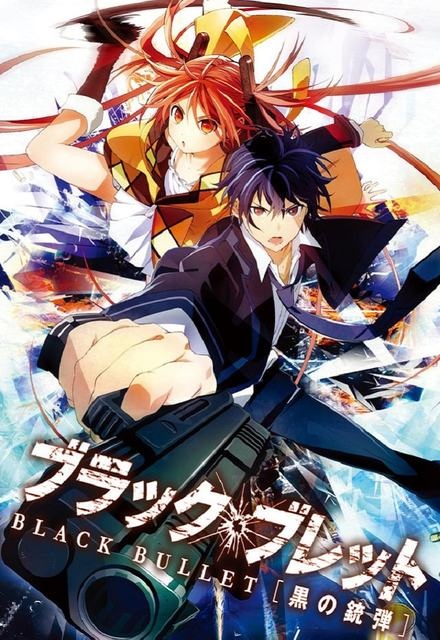 Avg Rating (0)
Your Rating
Tuesdays on Tokyo MX
Tracked 111 Times
Concluded
1 Seasons, 13 Episodes
30 Minutes
Buy or StreamAmazonAmazon UK
Anime Japanese Anime
In the year 2021, mankind is decimated by the epidemic of Gastrea, a parasitic virus, and is forced to live within the Monolith walls, which are created from Varanium: a metal that is able to subdue Gastrea. Soon, children who were born with the Gastrea virus and obtained superhuman abilities as a result, are discovered and dubbed "Cursed Children". Due to the Gastrea virus' intervention, the Cursed Children could only be female. Civil Securities are formed to specialize fighting against Gastrea, operating with the pair of an Initiator, who are cursed children, and a Promoter, serving to lead the cursed children. Ten years after the epidemic, Rentaro Satomi, a high school student who is also a Promoter in Tendo Civil Security Agency owned by his childhood friend Kisara Tendo, along with his Initiator, Enju Aihara, conducts missions to prevent the destruction of the Tokyo Area and the world.
Share on:

This was pretty amasing. Lots of combat and action against the bugs that kill people. Interesting story even though it was really short. Basically a decent anime with lots of action some funny moments and its only 13 episodes so a days worth of watching.

another anime that came and left to soon. you can't say that there are not much heart here that what drives the story. it about a boy who lives through the first war with the bugs only to come out of stronger and better. he comes to know his partner a curse child as like his own child. through the story the themes of racism and greed are highly put forth as dynmantic themes in the story as well as love and compassion for your fellow man. it a great story if your a military person there are themes of that too. what i would say is that the soundtrack is not the greatest but this year had not the greatest tracks so don't get your hopes up. watch this anime for the great action and even greater stories

ALL REVIEWS FOR BLACK BULLET »