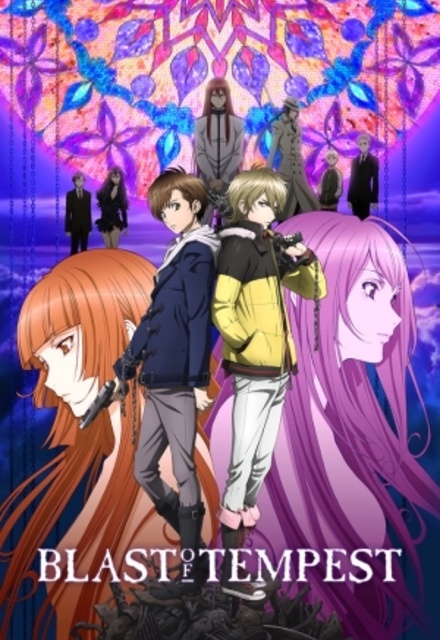 Avg Rating (0)
Your Rating
Fridays
Tracked 20 Times
Concluded
1 Seasons, 24 Episodes
30 Minutes
Buy or StreamAmazonAmazon UK
Anime Japanese Anime
The story revolves around Mahiro Fuwa, a teenager whose sister was mysteriously murdered one year before, and his friend Yoshino Takigawa. Mahiro is contacted by Hakaze Kusaribe, the leader of the Kusaribe clan who was left stranded on an unknown deserted island by her followers, and agrees to help Hakaze in exchange for her help to find out the culprit for the death of his family. Upon learning of his friend's intentions, Yoshino joins him on his quest to stand against the Kusaribe clan who intends to awaken the "Tree of Exodus" whose power can bring ruin to the entire world.[1] Several dialogues and plot elements in Zetsuen no Tempest pay homage to two works of William Shakespeare, Hamlet and The Tempest, which are two stories about retribution, albeit with completely opposing outcomes. During the confrontation between Samon and Mahiro amidst the revival of the Tree of Exodus, Yoshino recalled a flashback in which his girlfriend quoted from Hamlet. He replied that it was too unlucky to quote from, and she replied that the situation between him and Mahiro was similar to The Tempest. This realization allowed him to challenge Samon and turn the tides in his favor.
Share on:

Quite awesome. And they're straight.

i love watching anime being in my thirties you find the new anime out mostly sucks (They really do excludes some of this season of course) well i'm proud to say that finally there a show that gives you humor action and makes you think now there also shin sekai yuki on the site but i have a review on that. The story about good and evil and what choices the heroes makes. you find by the half of the story your perception changes and you are on a roller-coaster. i truly find that even i'm wondering till the end who's truly right and wrong and that what anime suppose to be a reflection of the people writing it and who watching it a great anime please watch it

ALL REVIEWS FOR BLAST OF TEMPEST »