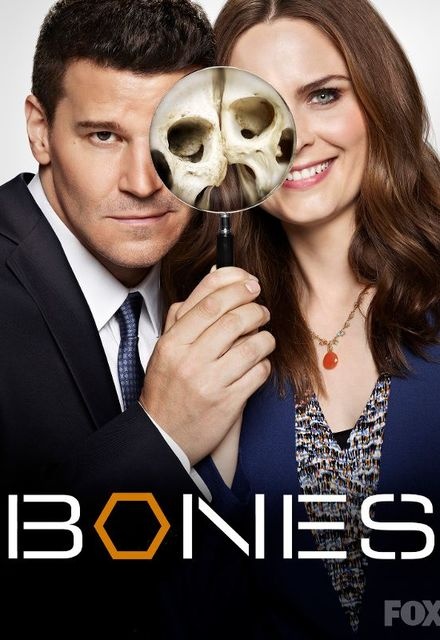 As an avid fan for procedural shows, I really enjoyed Bones overall. Like many others, I did think it ran a little longer than it should have, and the last two or three seasons were much more drama-arc driven than previous seasons to intrigue the audience. That being said, I absolutely adored watching all of the characters grow in this show. Just because Brennan and Booth were the main characters did not mean that their colleagues and friends didn't have episodes to shine and develop, and it created a much richer environment where the audience really felt like a member of the team. Good crime show that took us swiftly through its 12 seasons.
Goos character development through out, goos plots running one or more seasons, and managed to stop before it became redundant, or started going round in circles.

This was the first show that got me hooked on binge watching. Sad to see it go, but I'm glad they ended it because this T.V show is one of the ones that didn't get ruined by continuation of plot. Overall good plot and show, in the middle it kinda got a little boring and redundant but at the end it was all good!! Fun series following 2 polar-opposite characters solving crimes and educating us (less-educated geeks #scienceiscool) every week á la CSI.
The chemistry between Bones and Booth is immediately apparent and it's always a question in your mind, when will "they" happen. Supporting cast is fun and interesting and I like the way every week had a different (literally as well as figuratively) brilliant intern later in the series supporting the duo/team.
Went easily a season TOO long and ruined the magic a bit, but one of the weekly shows on TV I looked forward to.
Worth a binge.

I don't know how much longer.

Great show and loved to see Bones become more and more "normal". But the show needed to end was getting too long.

I loved this show until they had that stupid baby! Then I stopped watching. I like that Sweets "wears hats now, and a cute little beard."

I LOVE THIS SHOW!
I GENUINELY STAYED UP TILL 8AM TO WATCH THIS AND I HAVE NO REGRETS. (I also watched all 246 episodes in one month. I had a lot of free time but it was so worth it.)

Show is about Dr. Temperance "Bones" Brennan is a forensic anthropolgist who must team up with FBI Special Agent Seeley Booth to solve murder mysteries revolving around human remains. Dr. Bones and her team study bones and come up with ways to solve murders. A lovely show while it lasted they were great. It was up and down of liking it, when they were following a bad guy through each story it was great. Angela was my favourite. She was Queen of the lab ;)

Was really good. Can see why there are so many seasons. Just wished there were more

Thank God this POS has come to an end. Four seasons too many in my opinion.

Ugh, can they stop pulling out the whole Booth/Bosnia thing? It's kinda gross and maybe they could, like, ask someone from the Ex-Yugoslavia for advice because if they keep presenting us as war criminals and mister america over here as our lord and saviour I will puke. Maybe americans could stick to being worried about their own criminals, like the ones they put in the office recently, instead of inventing our criminals, huh? Stay in your lane, when you have a global platform, you should maybe consider what message you're sending. Especially if you're spreading it about someone without their own global voice or reach.

Truthfully. It's formulaic and predictable. Yet, I've kept it on because the ensemble cast has always been a group I enjoy watching.

Bones is great. Sad, happy, smart and thought provoking. You also can't help to fall in love and get invested with the characters.

I loved this show from the beginning. Can't wait to start watching it again!! Loved this show but it needs to finish. The next season should be the last loved it for years!!

Bones is one of the best crime shows out there for me. I just love it. But I do think it ran for a little too long.

My wife & I really love this show. It has it's ups and downs but it's very interesting every time. This last episode though, "High Treason in the Holiday Season", had me laughing a little. I mean really? The NSA listening to everyone's phones and bugging every room in every building, hotel, home? Kinda funny how paranoid Hollywood is. I mean, they do have a lot of secrets, don't they? LOL