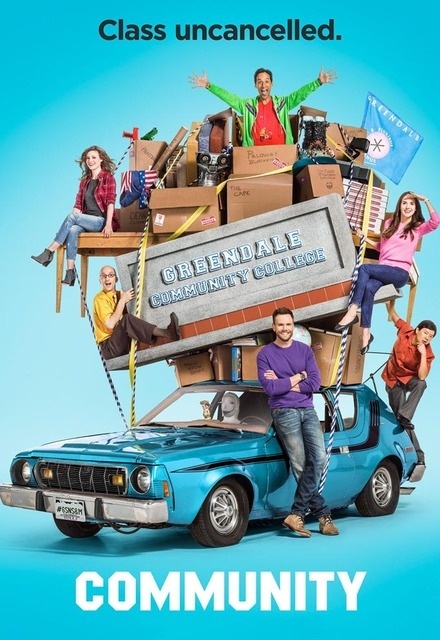 Avg Rating (0)
Your Rating
Thursdays, 8:00 PM EST on Yahoo!/NBC
Tracked 60,791 Times
Concluded
6 Seasons, 110 Episodes
30 Minutes
Buy or StreamAmazonAmazon UK
Comedy NBC Sitcom Yahoo!
Community is a smart comedy series about a band of misfits who attend Greendale Community College. At the center of the group is Jeff Winger (Joel McHale, "The Soup"), a fast-talking lawyer whose degree has been revoked. With some help from his fellow classmates, Winger forms a study group who eventually learn more about themselves than their course work. Also starring Chevy Chase.
Share on:

I think the beauty about this is that everyone at university/college tries to compare themselves to the one of the guys at Geendale (and everyone hopes they're not Chang!)

Is there a series able to be labeled post-post-modern? Very intelligent, very meta. An investment. Should have cancelled it permanently a couple of seasons ago, well, at least they tried to cancel it.

I was really sad when they cancelled this show, because I felt like a really good show nowadays doesn't get the change to show what else they have to give. And I was sad, as well to know that when it had the opportunity to go on, because of Yahoo, characters as Troy, Pierce and Shirley wouldn't be back. But I'm really glad it's still on though! 5/5

Very funny and I love the special episodes! Like paintball and pillow forts! Fun show

A comedy serie unlike other comedy series. There are great episodes and ones that are totally hit and miss for me. Overall it is pretty great and it pushes boundaries. Firing Dan Harmon pretty much ruined it, but the first seasons really are a masterpiece.

good show to watch happy they brought it back

Super funny and enjoyable .. We've had our 6 seasons now we just need that movie :) Community is the perfect example of how shows can create a massive fan following without strong tv ratings because shows can be watched across so many platforms now. The networks need to evolve with the times and our streaming culture and not try to mess around or cancel great programming just because they are not as watched on live TV as The Big Bang Theory.

community college is not this fun! i have no friends and it is hell.. but its fun to imagine!

This has been my favorite show since I first watched it about five years ago. It's full of pop culture references and meta humor but also a lovable set of characters, that become a family through wacky adventures. There's noone in this group I don't love with all my heart and I'm gonna miss them all like crazy. The show really finds its voice in season 2, so stick with it and season 4 never happened (even the show itself says so).
#sixseasonsandamovie 6 seasons and a movie! It hasn't been the same since Donald Glover left but it still is very funny.

I got a few good laughs from this show. I still need to watch the later seasons, but it started off great for the first two.