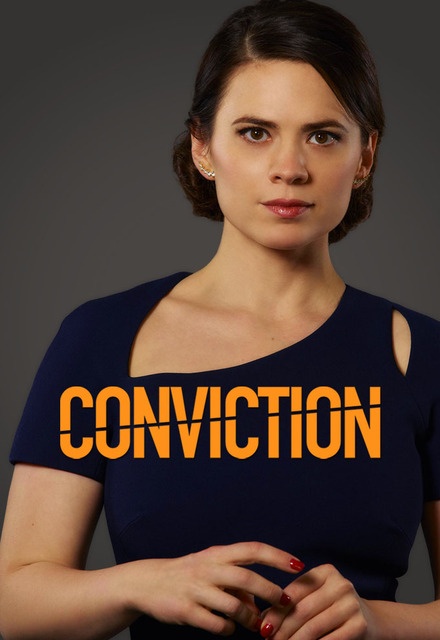 Avg Rating (0)
Your Rating
Sundays, 10:00 PM EST on ABC
Tracked 5,065 Times
Concluded
1 Seasons, 13 Episodes
60 Minutes
Buy or StreamAmazonAmazon UK
ABC Courtroom Drama Drama
'Conviction' is the story of Carter Morrison, the brilliant but rebellious daughter of a Clinton-like political family who is forced into taking a job as the head of Los Angeles' newly created Conviction Integrity Unit.
Share on:

if I read the reviews before watching the show I would have been disappointed for missing it. I'm not saying that the reviews are wrong, they are, in general, correct. However, for me, Hayes Morrison (Haley Atwell) is an interesting character who maybe coming to terms with consequences of actions (in a rebellious teenage, stunted growth kinda way) whilst dealing with pressures of privilege, politics, family and career. I'd like to see how this develops so I'm glad I didn't read the reviews beforehand. I,m prepared to just wait and see.........

Forgettable show with bad dialogue and cliche characters. It will probably be on for years.

Given some of the reviews and the fact that it had been listed as "In Danger", I was skeptical about this show. I'm glad I decided to give it a go for myself instead of relying on other peoples opinions because I really enjoyed this. We can look at it and question whether someone arrested for possession could really be put in charge of a unit like this via the circumstances that they did, but unless we actually live in that world we don't really know - we'd like to think it doesn't happen, but who knows. I like how each character is "broken" in their own way and has things to hide - it makes them more interesting and sets the show apart from the other stock standard legal dramas. I would like to have seen them come up with a case or two where the convictions were upheld though (baring that one where two of the convictions were quashed and one upheld).

OMG, NO! I just realized that this is one of the few shows on TV that really understands PRIVILEGE...and shows someone who cares about changing things and now they are going to cancel it, sigh.

I presume a great many of you will be watching this "fairly standard" legal drama to see Haley Atwell return to TV in another lead female role after ABC's Agent Carter. But is the show actually worth ourtime? I think so.

Conviction does have a premise. It's actually not so much a typical legal drama. Its about a team who seeks out cases that have already been tried where the evidence was thin, and reopens and reassess them, sort of like a check to the legal system to make sure no innocent people wrongly convicted should have to remain in prison. The team is lead by Hayes Morrison (Haley Atwell) who is the daughter of a former first lady, and inspite of being an attourney with a phenomenal record, she recently (prior to the start of the show) went through some public notoriety and ridicule regarding a sex scandal at the college where she taught. (WHY?!) The pilot establishes that she is a highly capable, but rebellious and damaged person, but ultimately discovers that this new job of hers, is the perfect way for her to continue her rebellion, but this time, against the system, and not her parents and circumstances. I get the concept, but as a main character, doesn't she need to be the most likeable character? I definitely don't "hate" her from the pilot, but I certainly can't identify with her. There was one scene where she admitted that people refered to her as the "campus bike", in regards to her sex scandal where she allegedly slept with multiple students. WHY?!!! How does this add to her character development? I'm not saying that a female lead can't do whatever she wants with her fictional body, but is that really what the world needs right now? A sex-crazed, former drug dealing notorious party girl who inspite of being a lawyer seems to have a disregard for the law? I don't know. But at the very least, she is certainly a dynamic and interesting character.

Anyway, I apologise for digressing. The show is a procedural, and reminds me very much of Scandal in its early days. You've got a team of unique characters who each bring something different to the table. It's not a new concept, but its definitely one that works, and I think that in this case, the cast is indeed interesting and I definitely would like to learn more about them.

Conviction is certainly a drama worth watching, especially for fans of Scandal, How to Get Away with Murder, Notorious, The Catch, and any similar themed show.

It should be noted that while this episode didn't direction contain any, there were 3 mentions or references to rape, so caution be advised. I know that the second they decide to retry a case of a convicted rapist, I am SO far out of there.

I know that this show gets a lot of flack for not being up to par, but I have to be honest; I genuinely enjoyed the show! The POV is different from the typical crime/procedural dramas that we all love since Conviction focuses on reopening cases and getting justice for those who were wronged by the system. I think that this is a contemporary approach as it links to a lot of current issues in America.

Hayes (Hayley Atwell) is a great, somewhat anti-hero character and truly leads the show. I think that some of characters seem misplaced such as Frankie and Tess as they just don't seem like they belong at the CIU. They are played by brilliant actors nonetheless and added to the 'star' quality with Frankie (Manny Montana) from Graceland fame and Tess (Emily Kinney) from The Walking Dead! I was thrilled to see Shawn Ashmore from The Following in this too; he's a good actor!

It would've been great to see how this show could've evolved if it was given a second season. I think that it would've allowed the characters to evolve more and to really push the POV further. It's a shame that it was short-lived but hopefully the actors will move on to greater roles.

Haley Atwell is a fantastic actress as anyone can see from her performance as Peggy Carter, however, I just couldn't really feel engaged in her character Hayes or the rest of this show. The other characters lack any depth and are not given time to develop. The concept of overturning the convictions of innocent people is an appealing one and should have worked well in the procedural format but there was never anything that special about this show. I love this show. I watch a lot of the crime dramas where law enforcement works to get it right the first time, but in real life that doesn't always happen and I love that this show comes at the justice system from that point of view.

ugh. was it just me or was her character completely ridiculous. She's caught in possession of a controlled substance and gets promoted to the head of a task force to save wrongfully convicted people? A convicted felon handling evidence? What? He would be destroyed in court, and all evidence handled would be tainted. This show is pretty far fetched.

So this show is not what I expected. The main character is really a broken person. I like the premise of this show but I am finding it difficult to connect with any of these characters. Having read the reviews I didn't watch the show at the time of its airing. Having binge watched it during the Covid-19 mess we're all in ... I must say I regret not having watched the show earlier. Hayley Atwell brings to life a very real character that is not always seen on TV. At first glance her character is the vapid, troubled, arrogant and seemingly entitled woman you would expect. But Atwell brought a lot of depth to the character, the caring and big-hearted human being was shown behind the strong facade of her scandals. Even the final episode was great... at personal cost she chose to act seemingly callously so she can prevent one of her team being fired. It's a shame. I wish there was more than 13 episodes.

Started watching this show because I loved Hayley Atwater in Agent Carter. Really enjoyed the premise behind the show and wished it had not been cancelled too soon. This series kept one glued to the edge of the seat wondering who the actual killer could be and in this way it was very captivating.

Definitely an interring idea but the follow though was lacking. Dialogue was sometimes off, and the success of the unit was questionable in most cases. Especially given how s=easy they found evidence.

How could they do this to Hayley Atwell?!? Cancelling Agent Carter for this run-of-the-mill legal bla-bla with such bad dialogue that it hurt my ears! It's been a few years now that it aired and I'm still furious. The 2,5 stars are just for Hayley.

The show was interesting and was getting more so; what with the protagonist who is a former first daughter who is not only smart and bold but also doesn't care about rules or what other people say. It deserved more than one season.

Started off okay. Then, it really wasn't. I little cliche, but not bad. I think it could have had staying power for another season or two. Kinda sad it was cancelled. Apart from the relationship between the two main characters - there was no where for the series to go.
So concluded ...

First part was okay the secont half got way better

This show could have been great and inspiring and interesting. The failures of the justice system and wrongful convictions are definitely things that could be explored on TV.
Then why was the focus on Hayes' romantic drama?! No wonder it got cancelled.