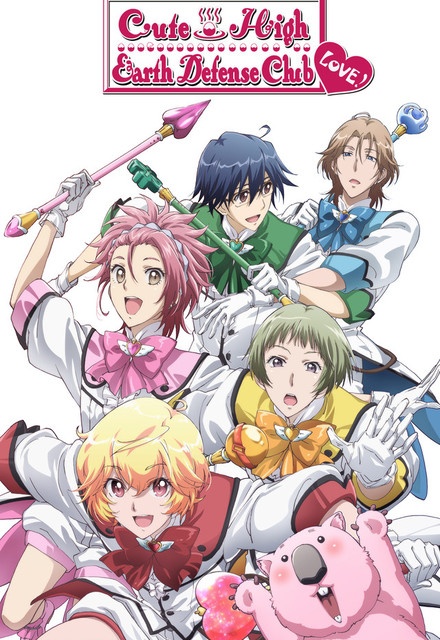 Avg Rating (0)
Your Rating
Tuesdays on TV Tokio
Tracked 7 Times
Concluded
1 Seasons, 12 Episodes
30 Minutes
Buy or StreamAmazonAmazon UK
Anime Japanese Anime
The Earth Defense Club at Binan High School (Yumoto Hakone, En Yufuin, Atsushi Kinugawa, Io Naruko and Ryuu Zaou) who regularly attend a local bathhouse run by Yumoto's brother, are approached by a strange pink wombat-like being from another planet who charges them (rather involuntarily) with the task of saving the world. Using a set of "Loveracelets" he gives them, the group transforms into Battle Lovers, who use the power of love to combat foes intent on spreading hate and discord. As they battle, they encounter the Earth Conquest Club under the influence of a small green hedgehog-like creature named Zundar; student council members Kinshiro Kusatsu, Ibushi Arima and Akoya Gero become their enemies who are also responsible for creating the monsters the Lovers fight.
Share on:

[user]foxybrownjr[/user]While i will say that i did like somewhat this anime it seemed like it should have been a ova not a full series. it just seemed like a running joke that went on to long. a full length movie or just two or three ova's would have done the trick better then a full series be it that it was a long one. it still seemed a little too long. why i say it should have been a boys love anime because it just wanted to go their and not in a nasty way in a well in case your thinking it. the outfits are kinda jokes and they do say it a a joke in the anime but it still not funny to me. i gave it three stars because after you read the summary watch the last two episodes that there series maybe three for sure. it a waste of time just a odd anime. second season is a little better they get the joke finally they get it now watch it and be better somewhat better