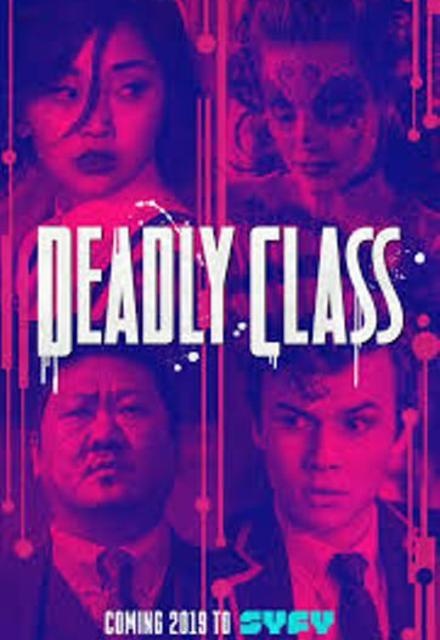 Avg Rating (3.83)
Your Rating
Wednesdays, 10:00 PM EST on Syfy
Tracked 2,069 Times
Concluded
1 Seasons, 10 Episodes
60 Minutes
Buy or StreamAmazonAmazon UK
Canceled Syfy
Set in a dark, comic book world against the backdrop of late 80s counter culture, it follows a homeless teen recruited into a storied elite private school where the world’s top crime families send their next generations. Maintaining his moral code while surviving a ruthless curriculum, vicious social cliques and his own adolescent uncertainties soon proves to be vital.
Share on:

Yeup, I dig it. It is completely different than anything I have ever seen. They are all indeed criminals, murderers, but at the same time there is goodness in them?? I like the complexity and the idea of a murderer society.

Its the dark version of Harry Potter. An orphan with scare on his forehead is allowed into a secret school with different groups of kids learning the dark arts.

The near constant bodily injuries are rather dumb as the kids seems to heal for no apparant reason in an episode or two - even when they are stabbed. There is surprisingly little sex though.

The plot meanders all over the place touching on the backstory of all the numerous main characters. There doesn't seem to be much point to any of it. It might be somewhat interesting to watch if you like seeing people get beaten or tortured.

The acting and cinimatography are well done. Some of the fight scenes are well choreographed. The whole secret school thing comes off as contrived. The headmistress is weird and the monks seem artificially inposed for no reason.

Horrible last episode to the first season. If the only thing that happens is that everyone dies, then that is not writing talent, that is a mental condition.

Things I hate: Everybody smokes cigarettes. I think there should be a 1 million dollar fine for every second someone is smoking on screen.

ALL REVIEWS FOR DEADLY CLASS »