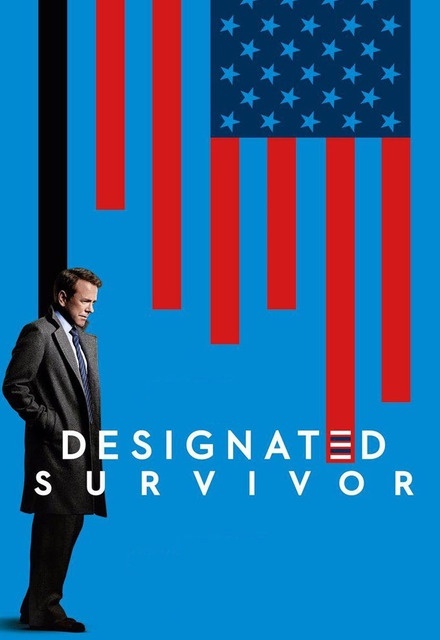 Avg Rating (0)
Your Rating
Fridays, 3:00 AM EST on Netflix
Tracked 17,766 Times
Hiatus
3 Seasons, 53 Episodes
60 Minutes
Buy or StreamAmazonAmazon UK
ABC Drama Netflix Political Drama Resurrected
President Kirkman will face a political reality... campaigning. What does it take to make a leader? What price will he be willing to pay? This season will explore today's world of campaigning, smear tactics, debates, campaign finance and "fake news." Democracy, as we know it, will hang in the balance.
Share on:

Kiefer Sutherland returns to TV in another lead role which is perfectly suited for him. He's played Jack Bauer, the most badass man on TV, and he's played a father willing to do anything on Touch, and now he plays a combination of the two on Designated Survivor -- and he also happens to be the president of the United States.

You may or may not have seen the trailers or read the premise of Designates Survivor, but long story short, there is an attack on the capital building during the state of the union, or some important event where everyone in the line of succession to the presidency is gathered, and there are no survivors, leaving Thomas Kirkland (Kiefer Sutherland), the Secretary of Home... something (basically infrastructure) as POTUS. Naturally you have your generals who want to find find a skapegoat to blame, and believe Thomas is unfit to lead, but said opposition doesn't realize that Thomas is surprisingly more competent than anyone, even himself expects, and from the pilot episode we can see that he is a very well-read and educated man who knows how to get things done.

I believe this series is based off a book, and I bet its a fantastic one at that.

I was a little surprised that the pilot was only one hour, as literally everything that happened in it happened in the trailer ... and they didn't cover much else after he becomes president. So that was a bit of a let down, but it was very entertaining, and I can't wait for next week. Jack Bauer for president!!!!

Kiefer Sutherland is a TV show legend where he has played the likes of Jack Bauer in 24 and has had a few other cameo shows done. Designated Survivor excites me just as much as 24 made be excited! The first episode was great! I absolutely can not wait for next week!

So this is a completely different type of political drama then we have seen before. I felt that the characters came across as relatable. I really liked the fact that the main character didn't just walk into the White House like he knew how to be POTUS. It will be very interesting to see how the season plays out.

This show is a new age political drama about a man who falls into power and becomes the "Designated Survivor". Would you step down for the good of the American people? or would you take charge and start a new uncorrupt government. The cast is filled with big names, the story is well written and the characters themselves feel very approachable. I'm interested to see where the story takes us.

For a non-American, this show is super good. It takes a realistic view on politics and surving after a major catastrophe. However, if you are American, be prepared to shed your prejudice on either political party's media propaganda and start thinking on the future instead, otherwise you'll get stuck disliking it for no good reason... good to see sutherland back on tv...even if it is as a bit of a nerd

This show was not realistic. The man who becomes president after everyone else qualified to lead dies, seemed ambivalent and totally unsure of himself. His major question was should he quit or not. That made me angry. I want someone as a president who KNOWS THEY WANT TO BE THERE.

Then then the man goes into a meeting with a world leader and his personality as president totally changes. It was not believable or realistic that he would be so weak and wimpy one moment and then totally switch the next.

You know in reality right after that meeting he would just go home and spend two hours still wondering if he should continue being president.

So basically I didn't buy it at all.

And another thing. Right after they show the capital blow up, the next scene is him at home being a pathetic dad to his wife and family. Why would anyone care at this point about his home life, WHEN WE JUST SAW THE CAPITAL BLOW UP?

The last thing I was thinking was "I wonder if his kids have homework?"

Kiefer Sutherland has landed another great TV role with "Designated Survivor". I foresee many twists and turns in future programs (similar to 24) that will leave the viewers guessing, and on the edge of their seats, with what's going to happen next. I think there's a lot of potential for a great series here and my hat's off to Mr. Sutherland for his continued excellence in whatever he chooses to do. It is good to see Zoe McLellan is back, and playing on Designated Survivor. I have seen her on NCIS New Orleans, and have missed her. Her replacements NCIS are okay, but cannot really replacement Zoe. She is great on DS, her presence makes the show that much better, of course, we cannot exclude the presence of Keifer Sutherland--excellent, excellent actor--he gets it from his daddy.

Keifer does it again ! Donald Sutherland's son is just like a chip off the old block , when it comes to Roles he has taken on TV . And what a premise , if u look around Today's Reality in Politics ! Scary that the Movies or Series seem to Blow-up first , its like we keep giving the Terrorists a road map to Death ! But then again , they think that and that's why in reality , they are getting apprehended , most but not all the time.
This show starts off with a Bang , the swearing in of a Cabinet member who was designated survivor as the new POTUS. When everyone at the State of the Union.......well just watch it for yourself ,its a great start to this new series !
EDIT Update : Good to hear , President Trump is watching this to learn about Politics from Keifer's POTUS portrayal....hope he learns how to be Humane at the same time and stop BS'in the People of the USA & making us look DUMB & Dumber to the Universe !

I'm surprised at how engaged I am in this series. Considering the insanity on our current administration, it has me longing for a President as wise and compassionate as President Kirkman. It is the exact opposite of House of Cards. For every greedy, power-hungry, unethical response to DC gyrations in House of Cards, President Kirkman responds with wisdom, insight and compassion in Designated Survivor. It is a model of the kinds of leaders we want.

We're well into season two now and I can't get enough of this one. Tonight's ep was akin to one guy playing Jefferson then instantly turning into Hamilton.. taking both sides of an issue eloquently. Mind blown. My only critique.. the show isn't long enough.. feels like it just gets started then poof.. it's over. It gets better and better with each episode. Sure... it's not a new story line but it's refreshing to see a good action/drama show back on TV amidst a whole bunch of horror and superhero overload. I do not like government genre shows, but OMG this is AWESOME! I'm obsessed with it. First episode: BOOM plot twist. Fifth episode: Like seriously? Is this real? No no no no! this cant happen, can it? Episode 8: WHY HASN'T ANYONE NOTICED THE BAD GUY! Episode ten: HOLY MOTHER OF ALL GODS LIKE FOR REAL? IS THIS HAPPENING?! I NEED MORE EPISODES NOW! AND I MEAN THIS SECOND!

I'm not a Keifer Sutherland fan - never have been, but I really enjoyed the first season of this show. Can't wait to see what season 2 brings.

What is it about these new shows? They start out with an interesting premise and then everything goes to hell.
The first two episodes were OK. Then episode three managed to kill any enthusiasm I had.
Maybe the networks need to rethink the 13 episode concept. Six episodes would probably have done justice to the idea. The rest is just repeat and repeat and ... starts strong, maybe the west wing is finally back


Edit:
Sadly it falls of rapidly. I stopped watching because of the extremely predictable plot around the information flow issues between the FBI and the White House. The weak side story could not deflect from that massive problem which came apparent in one of the very first episodes and played out exactly as anticipated.