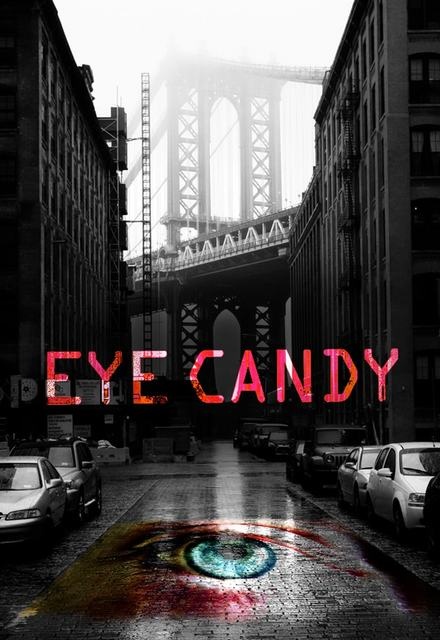 Avg Rating (0)
Your Rating
Sundays, 10:00 PM EST on MTV
Tracked 3,531 Times
Concluded
1 Seasons, 10 Episodes
60 Minutes
Buy or StreamAmazonAmazon UK
Canceled Crime Drama MTV Serial Killers
Eye Candy, from top genre feature producer Jason Blum, stars Victoria Justice as tech genius Lindy who begins to suspect that one of her online suitors might be a deadly cyber stalker. When her friends at the cyber-police uncover a potential serial killer in Manhattan, she works with the hackers to solve the murders while unleashing her own style of justice.
Share on:

I'm so disappointed with this show. It had the chance to drag the tired old police narrative kicking and screaming into the 21st century but fails at every turn. Victoria Justice is the one bright spot in this show but she can't carry the appalling writing, terrible supporting cast and over the top exposition on her back. The show's failure is perhaps best highlighted by a scene in episode 3 where two of the main characters inform a grieving mother that her missing daughter is dead. The scene is so bad in every way that when they tell her the news, instead of feeling sorry for her, I start laughing. This show will go down as a good premise but a sorely missed opportunity.

Oh, and a quick p.s. for MTV; maybe don't flash up a graphic every time a song plays in the background telling us the name of the song and the artist. It kinda ruins the moment.

I think this is a better than average serial killer story. Predictable is not a word I would use unless the bestie's buddy is the bad guy. Perhaps it is a bit unbelievable that a drop dead gorgeous girl is a computer hacker. I guess I am a bit too old to understand the singles club dating scene, since I did't like it all that much when I was young.

A very interesting twist on the serial killer shows. In a world dominated by social media, this show is an eye opener. I was disappointed to see it cancelled.

At first, you might expect Eye Candy to be yet another girly MTV show. But it does end up surprising you, with its twists and suspense, this show gave me goosebumps. The tech side of it is very interesting, and is a real eye-opener regarding the internet and technology these days. Lets not forget the gorgeous cast members! I recommend this show 100%, you'll be hooked.

In this modern world, dominated by iPhones and Kardashians, it’s better to be safe than sorry. Eye Candy, MTV’s first crime drama series based on the R.L. Stein novel of the same name, explores this idea. The show follows a young New Yorker, Lindy, as she is being stalked by a cyberstalker turned serial killer.

I find this show to be interesting because it takes on the premise of what could happen in this world run with technology that is so easily hacked or compromised. Look at the iCloud leaked photo scandal from last year for an example that nothing is as safe as it seems. Lindy is a computer wiz whose sister was abducted three years ago. Ever since then, Lindy has been trying to find her sister and help find other missing people that the police have given up on.

Lindy falls victim to a cyberstalker using the MTV version of Tindr called “Flirtual” – probably because Tindr didn’t want their brand tied to something that shows innocent online daters slashed to pieces. The motive of the serial killer is to stop people from lying on their profiles and by “lying” they mean hiding their flaws, from acne covered by Instagram filters to crooked teeth hidden with a closed smile. This killer is looking for the “perfect one,” and that means Lindy.

“Human life – so delicate, so fragile, easy to extinguish. I look for the freshest, the juiciest, the most tender, USDA prime, Grade A, low fat, ultra lean. The One. Used to be I had to go outside to find them, not anymore. The Internet – God’s gift to psychopaths. Are any of them real? I need someone real – someone who understands. Why do they lie? They’ll pay… one by one.” – Eye Candy, Episode 1: “K3U”

So who can be the perfect one? Insert Victoria Justice, the 21-year-old former Nickelodeon starlet from Zoey 101 and Victorious who has a stunning face and a size two frame – if that. Based on her Nickelodeon background, most people didn’t expect much from her performance. But she’s surprisingly good in her role on Eye Candy and I can definitely see her being offered a role in a horror movie in the future based on her scream skills.

Something that makes the show interesting is that it is shown from Lindy’s point of view, but with cutaways to the perspective of the murderer. This is cool because it almost pays homage to the great horror classics Halloween. In that moment, you are in the killer’s mind, thus making you the killer like Michael Myers in the beginning of the classic film. Eye Candy also pays homage to Texas Chainsaw Massacre in episode three, “HBTU,” by hanging a victim’s teeth from the ceiling. Episode four, “YOLO,” featured found footage on a GoPro camera much like in The Blair Witch Project, REC., and the Paranormal Activity films (to name a few). The face of the “Stowaway” ghost/legend featured in the episode oddly resembles the melted droopy face likeness of the iconic Ghostface mask from the Scream series.

It should be mentioned that, although this show is on MTV, it should not be tossed aside as something “childish” for the MTV and CW demographic. This is a whole new venture for MTV and it is far more intense than its likely competitors, Pretty Little Liars or Vampire Diaries. The amount of violence, gore, and suspense are geared toward someone who is more comfortable with Criminal Minds or American Horror Story (the good seasons – not Freakshow. Eye Candy is way better than Freakshow – Lana Del Rey covers? Really, Ryan Murphy?).

So, if you’re waiting for Pretty Little Liars to be interesting again or want to find a show with a bit more action in it so your boyfriend isn’t falling asleep while Aria and the girls try to avoid A – I’d suggest Eye Candy; it’s like CSI meets Stalker meets Pretty Little Liars.

I really liked the whole concept of this show and the idea of the storyline but a couple of episodes in it got really predictable and seemed kind of rushed. It's a shame they didn't try and make something more of this really interesting topic. I guess it's not that great of a show but you can use it as a placeholder when you have nothing else to watch.

OK, my initial rating for the first three episodes was a solid four stars. The back story, the characters and the main plot were intriguing. I was pleasantly surprised as MTV isn't one of my "go to" channels for quality programming. Also, I didn't know if I would enjoy the show due to it being aimed as a young adult demographic and I'm an old fogy.

So then came episode four, YOLO. I'm not going to give any spoilers. The story was trite, predictable and boring. This is the first episode were the main story takes a back seat and it showed. The theme for episode four is very overdone. There was a lot of cringe-worthy dialogue between the main characters and the denouement was, frankly unbelievable.

I shall stick with it for a couple more episodes, so hopefully it may improve. I'll have to see and may update my review accordingly.

Nothing really great about this show, the cast is good-looking but the show is a bit weak.

This show made me mistrust my technological devices

This was a really good show until MTV decided to scrap it altogether ...

Maybe not the best or greatest of shows, but it did have it's own surprising twists and suspense that kept you on the edge of your seat.

I did find at some points in the show things were getting an "over the top" vibe, but then they would come back to the main plot.

I Would have liked to have seen more, but the plot was quite limited to where they could turn to once the serial killer was exposed. A very good premise with the real danger lurking in the net.
Like the lead female character: good characterization, strong motives and consistency; not bad acting but nothing to remember either.
I really never think the main motivation of Lindsey was based in a total "lie" or misconception. The season finale hangout was amazing and I was hopping to see what really happened.

To bad is cancel.

Not impressed ... was hoping for something better ... very predictable .. gonna give it a shot though and watch a few more episodes before deciding if im gonna scrap it or not.

I was looking forward to this as soon as I heard about it because I like Victoria, but after reading some of these comments I was concerned. However, I was pleasantly surprised - and, even better, I liked most of the supporting cast that was established.

I'm a big fan of projects like this if they succeed at keeping me guessing. And the fact that right now I'm not sure what happened with her sister (will she be alive, will she be dead, who grabbed her, etc.), as well as not knowing who the serial killer stalking her is, makes me happy. I really love shows and movies that establish a cloaked villain who you have to try to identify through the wreckage of false starts and red-herrings. The fact that there are two mysteries to solve really thrills me, and the prospect that they could ultimately wind up being connected (because that's what I would do) thrills me even more.

I am saddened by the early death of a certain character, however. Said character was growing on me, and I had rather hoped that they may last a little longer. From a writer's perspective, though, it was a smart move to kill them...as a viewer, however, I wish that the writers hadn't, haha.

First Episode and I can honestly tell you this is the best thriller series I've seen. Serial Killer that uses technology to stalk his victims. That general plot is similar to Pretty Little Liars but this goes way above and beyond (and we all know PLL has a cult following, so this should go far!); this is what PLL could've been if it was on a better network. Worth a watch! Look forward to seeing more!

I like this one cant wait for the next one

Honestly, I finished watching because it got me hooked, but the story was not too impressive and the acting was really weak.

I was really disappointed that this show was cancelled. The first season kept my attention every step of the way.

I thought this was actually pretty interesting! Sucked it concluded already!

I absolutely loved this show, was gutted to find out that MTV had cancelled it. Was a really refreshing to watch and never a dull moment. It could have been brilliant for many more series.
I also loved how it was narrated by the killer as if it was almost a blog, keeping in touch with the online world from which the flirtual killer came from.