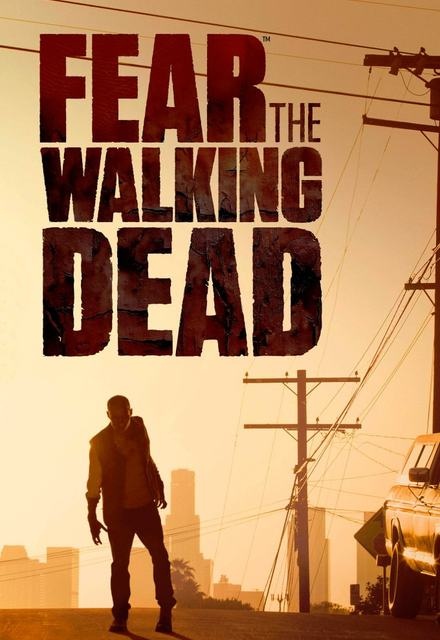 Avg Rating (0)
Your Rating
Sundays, 9:00 PM EST on AMC
Tracked 25,984 Times
Hiatus
5 Seasons, 69 Episodes
60 Minutes
Buy or StreamAmazonAmazon UK
AMC Action Drama Fantasy Futuristic Horror Post-Apocalyptic Supernatural Thriller
What did the world look like as it was transforming into the horrifying apocalypse depicted in The Walking Dead? The answer comes with Fear the Walking Dead, an all-new original series set in Los Angeles, following new characters as they face the beginning of the end of the world.
Share on:

Enjoyed the first ep, but I think it'll get better, the showrunner said it would be a 'slow burn' and that's true of the Pilot, just until the end. I really liked it and will keep watching, for now, anyway. Nice to see things from a different perspective.

ETA: 4 eps in and it is so boring and dull and all related synonyms. How they could make something so clueless out of such great material is beyond my comprehension.

So DIFFERENT from TWD yet good!

Same zombie/"walker" plot with an entirely different feel. To see the virus as it first happened is a new and interesting point of view.

UPDATE: By season 2 every episode since seems to have gotten worse. From the storytelling to the unlikable characters, to killing off a plethora of characters a'la The Walking Dead style, except we don't yet care about the characters they are so quickly killing off. I'm not sure how this keeps getting renewed... they should just call it.

UPDATE #2: I have literally been watching this show just to see the tie-in with TWD but I can't both anymore. This show officially sucks. Untracking.

I'm sorry but how is this any different than The Walking Dead???? Oh it sucks compared to it, that's how. I don't care about someone's drug problems amidst all of the zombie stuff. The acting is really sub par as well. Shame. Could have been so much better.

Love FTWD!!! The build up for this series is right on!!! My favorite right next to TWD and it just keeps getting better! Can't wait to see season 2 unfold :)

Set before the events of The Walking Dead, The story of Fear covers what happened from the earliest days of the outbreak, to the inevitable collapse of civilization. Fear has shifted focus from action to drama, so expect to spend more time getting to know the characters before they die horribly. Loved it! You are kind of expecting zombies to come out and kill everyone, but that is not what happens (yet). It seems like and feels like they are building up to something. The atmosphere is good, you can feel the panic start to build and the disbelieve. It has that TWD vibe, but with more civilisation and much more to lose! The pilot has this weird feel about it, you just want people to start freaking out, but instead they're all oblivious. Hopefully a few episodes in and we'll start to see the real dirt and grime of this show come to the surface, in a bite into your face kind of way. I truly can't wait.

Starts slow and continues even slower. The main characters are quite annoying and can´t get me interessted at all. Most of the time I wanted to scream at them. If any of them lives through the apocalypse I would be surprised. Probably won´t watch it anymore.

The only thing I fear about "Fear The Walking Dead" is that it may get renewed for another season.

So the guy at the beginning I thought was a girl and then he turned into Johnny Depps character from What´s eating Guilbert Grape/Fear & Loathing in Las Vegas!
Very unsure of this, a bit slow and iffy acting so far.

FEAR THE WALKING DEAD - SEASON ONE

I, like many others, can't help but compare 'Fear the Walking Dead' with 'The Walking Dead' and while I really hoped it would either surpass or offer an alternative to the same ol' zombie stereotype. It did not. In fact, I was begging for SOMETHING in the first episode. Excitement maybe? Suspense? Better Acting? Something other than... well, boredom.

I only made it two episodes before calling it quits. The acting was so dry that I couldn't stand it. I am a huge Walking Dead fan and maybe I had my hopes to high.

So I need to recant my earlier review, as I said earlier I am a huge Walking Dead fan and the fact that there was a cross over made me go back to the beginning. The first season only has 6 episodes and you have to push through them to get to the good stuff. Things pick up and move faster in seasons 2 & 3. I am currently on season 4 with only four episodes to go before the midseason premier in a few days. Grant it this is not TWD but I do see some of the characteristics of old favorites popping up.

TBH, if it hadn't been for the cross over event I don't know if I would have given this show a second chance. I tried, I really really tried to like this series. I just couldn't do it. I never liked any of the characters - except for the old guy who was really badass and the Johnny Depp look a like son. The show just hasn't answered any of the questions that I thought it would. It seems like it's a really bad rehash of TWD. At least with TWD, it pulled you in with the first episode. This show just didn't do it for me. This series could have been gold with different actor choices and a better script. I just can't watch it because of the lame ass direction it's going in.

Fear of the Walking Dead is a good spin off of The Walking Dead, applying a more on the ground point of view and aspect. These survivors learn different methods of survival and delve into a separate aspect of the "Walkers". The cast is strong and the characters are very well developed. A decent little brother to "The Walking Dead".

This spinoff promised a different take, but doesn't deliver it. Different group of people, set earlier in the zombie uprising, but it still is just more of the same. If you really like zombie shows or TWD watch it, otherwise I would look for something a little bit fresher. This show's been dead a while and it's about to turn.

With Zombie's being all the rage nowadays it was only a matter of time before another show came along to compete with The Walking Dead. Thankfully AMC realized this and decided to put a different spin on TWD world by letting us see how it all got started. Even though some of the characters leave something to be desired I have faith that as the show develops we will all be on the edge of our seats yelling at the TV set as we do with TWD every week. I am looking forward to the new season, and I am excited to see how they are going to keep this new show fresh, and what kind of crazy characters they will come up with. With the first season being only six episodes long I don't think that gives us enough to really judge this new show. For those that don't appreciate the characters just remember as we all know from TWD no one is safe in this new world.

The Walking Dead isn't a zombie, it's a monster.

If you grew up the lone horror-loving dork in high school, well, you now have lots and lots of company--- many of whom throw weekly parties every Sunday evening with their families, complete with snacks and "walker" t-shirts-- cheering, crying, and bonding over every single growl, shamble, and bite of their favorite undead cultural phenomenon.

If you're one of those millions who helped The Walking Dead to become the record-breaking hit it is, well, those Sundays fly by faster than an NFL season. Fortunately, you can now scratch that ghoulish itch, even in the lovely, warm spring weather!

Fear The Walking Dead, a companion piece to AMC's The Walking Dead, serves not so much as a prequel or spin-off, but as an alternate telling of the zombie virus we've become all too familiar with, this time trading in TWD's dirty Southern grit for the sunny, urban beauty of Los Angeles.

Centering around Madison Clark and her family (a dysfunctional one to say the least), FTWD places the viewer in the unique spot of having knowledge the main characters don't. As they're discovering the horrors ahead of them, we already know it. And not knowing what's ahead is terrifying, but actually KNOWING how bad it's going to get is almost scarier. And that's what FTWD delivers in spades-- after time, it's almost easy to become desensitized to the apocalyptic mess that is TWD's universe, but seeing normal life crumble into chaos really helps put the viewer into the characters' shoes.

As any horror fan knows, to build up to great horror requires great character-building, so be prepared to spend time becoming invested with these players. Some have complained about the show's slower pace, but that seems to stem from comparing this show to its parent series, instead of taking this show at its own merit. This is a fantastic, high-quality piece of zombie fiction, and should please fans of TWD and those who haven't caught on yet.

On the eve of a 15-episode second season, rest assured, FTWD will surely evolve and grow even further, giving us more Sunday evenings of undead fun. If you're a fan of The Walking Dead, you'll surely not want to take a bite out of this one!

this was utter trash don't like it at all horrible acting , slow , boring , shit actors. 1/5