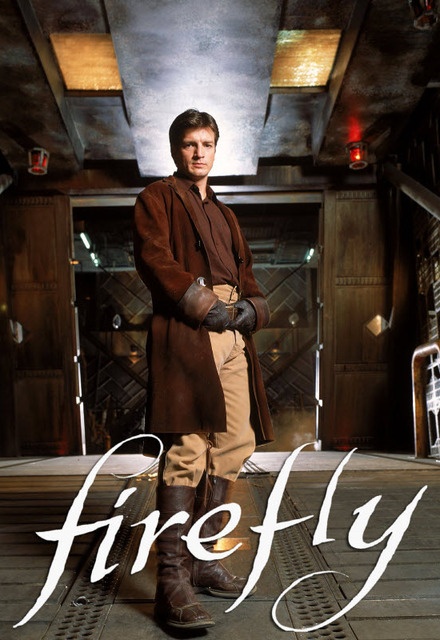 Avg Rating (0)
Your Rating
Mondays on Fox
Tracked 12,882 Times
Concluded
1 Seasons, 14 Episodes
60 Minutes
Buy or StreamAmazonAmazon UK
Action Canceled Drama Dystopian FOX Futuristic Space
Five hundred years in the future there's a whole new frontier, and the crew of the Firefly-class spaceship Serenity is eager to stake a claim on the action. They'll take any job, legal or illegal, to keep fuel in the tanks and food on the table. But things get a bit more complicated after they take on a passenger wanted by the new totalitarian Alliance regime. Now they find themselves on the run, desperate to steer clear of Alliance ships and the flesh-eating Reavers who live on the fringes of space.
Share on:

y only one season A truly great show, but sadly it stands at proof that Television Networks have the ability to take something great and abuse it to the point where they had to cancel the show. Who's ever idea it was to air these episodes out of order on television deserves a special place in hell.

Very good bring it back!

Whedon's work deserves better! This is a cult favorite for a good reason. WHYYYYYYYYYY ?!
Why would you stop at just one season ?
It's got laser guns, and horses, and illegal activities while travelling throughout the galaxy...
Might sound like a weird patchwork, but the characters work very well together, the acting is slightly over the top but it works well with the patchwork anyway.

Such a great show... Low budget but it approached sci fi from a really comfy perspective. Like cowboy bebop in terms of setting. Actors seemed passionate about their roles.

Some how this masterpiece came out about 5 years too soon. And on top of that the idiots at SciFi didn't even let Firefly have a full season.
There is nothing about this show the viewer won't like. It's a space western! Ten of the best actors that all did a fantastic job together. So glad that Joss Whedon fought so hard and found the backing for the movie Serenity, which somewhat brought the cliffhanger of a show to an end. Would have given up that movie, as I am sure all other fans would have, in exchange for 10 seasons of Firefly, though. It will always be missed, but never forgotten. And it gets better ever single time it's watched.

Firefly is a science fiction action television show that got canceled before its time. The show had a cast with a lot of dept, the story is interesting and the animations (for its time) are decent. The music is poorly chosen and there's issues with the script at some times but for the most parts the show is a good watch. This series is filled with excellent actors and this show started most of their careers.

So science fiction and Westerns are not my preferred genre's but I like Nathan Fillion. This show is a space western, so if you are interested in those genre's then I suggest you give it a try. As for me, there are other shows waiting in my queue that I want to watch. Only the greatest scifi series ever.

What can I say about Firefly. It's got skinny Castle in it. Cowboys in space. Nerds love it. And I guess I'm a nerd. They made a movie to wrap the show up, which was pretty good..... You get a real sense of togetherness watching Firefly. And I don't mean just the crew of Serenity being close, but you feel close to them. That sounds lame but it's true. Invested is the word. It's hard to get invested in shows these days, which is why this little production was so missed when it got canceled. I remember waiting for forever to watch it, so maybe I'm partially to blame. It was kind of a weird premise, and I'm not a huge sci-fi fan. But it's not really sci-fi. It's just good. At first I scoffed at the idea of Nathan Fillion being intimidating, because early on he says these one-liners that kinda just land like bombs. And everyone immediately shuts up. And I was like, "Who is this Canadian and why does everyone think he's tough?" Especially the Baldwin who's not one of the Baldwin family you're thinking of. He's got, like, 50 pounds on Castle, easy. But as you watch the show you start to respect Mal. And I would probably drop what I was doing if he came in with the 'hush up' talk, too. So, yeah, really good show. Perfect to knock out in a day. Or maybe space it out since there's so few of them. You could probably watch the first one, then watch the second one, then rewatch the first one and the second one and then the third one, then watch the first, second and third, then the fourth. And keep going like that. That will make it last a while. There's probably a math word to describe doing it like that, but I don't know math. Go Browncoats!

It's not a 'space western'. It's a show that takes place in space, with guys and girls that wear guns on their belts and talk like cowboys and sometimes herd cattle.

This show is an awesome SyFy Series, I hate the fact that it were concluded so early!
Firefly combines Action with Comedy in a Heartbreaking Story.
And also I love Nathan Fillion, he is one of my top actor!
Even that Firefly is so "old" it still can hold up graphically, if you do not expect the newest CGI.

I am currently 19 years old and I can just encourage all in my age to give it a shot!
And for all who want more of this show afterwards, you can watch the movie! :D

One of the best shows in the history of television. And I can see that I'm not the only one to think that. Just look at the reviews all over the internet. Joss did something amazing. The history, that world that he made up in his head was so unreal. He brought it to life beautifully.
I watched it in a couple days and I was amazed. Of course after the last episode I wanted more but they cancelled it and that decision I can't understand. Anyway..
The characters are so good. We have the captain and the crew where everyone has it's own place and purpose on the ship. And the ship - Serenity - we can count as another cast member/character. All the details are so good. The ship it's kind of a wreck, it's rough, some parts are missing sometimes. But it flies. It's their home. Every cabin reflects a characters personality. The cast was having a good time, as they said in numerous interviews and this friendship was real on and off screen, wchich makes it a joy to watch.
The crew did a really great job putting this set together, I felt like I was on the ship, somewhere on space. I wasn't bored for a second.
Also be careful because the theme song (plus one of the songs form episode "Jaynestown") can stay in your head for ever.

It's a perfect story for every sci-fi fan. You have to watch it.
And then there's a movie.. Best show that has ever existed!

Greatest show ever, so bummed they only had 1 season but totally loved the movie follow-up. I still don't understand why this show was cancelled. The cast was so fun to watch. The best word to describe this show is "SHINY".