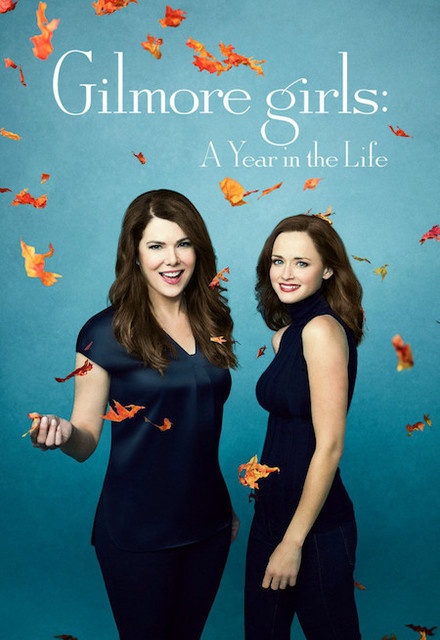 Gilmore Girls: A Year in the Life This was so disappointing. It's not the Rory we fell in love with. She's so different and lost and seems to have forgotten about who she used to be. Lorelai agreeing on the behavior of Rory was also so messed up when she previously lashed out at Rory for sleeping with Dean because he was married. I would have wanted to see more of Sookie.

Also, the witty dialogues we are used to are not so witty anymore and just boring and off..

What´s to say... I MISSED you girls!
I love that they brought back so many of the old characters and did a great job of reviving the scenery.
However I have to admit, they could have set the pace a little bit faster. But this might go back to the fact that I recognized many scenes from the trailers. I am looking forward to the second episode and the new drama those three generations´lives will enfold.

Previously when she had a boyfriend she felt conflicted because she was attracted to someone else. Now she has a boyfriend, and a no strings sex relationship with an ex and doesn't even have a care. I found that hard to enjoy.

They kept showing the boyfriend as a very bland person no one remembered. One who Rory just couldn't remember to break up with. I wouldn't want to be treated like that AND cheated on.

Also I know that celebrities get plastic surgery on their faces, but when they do, I seem to stare at it feeling confused and counting all the ways it's just doesn't look the same. That is all I was thinking when Lorelai was on screen.

A 90 minute episode where nothing happens is too long.

I do feel that a one star review is too low, but what happened in the first episode that was interesting? The only interesting part was seeing the old characters again. That is it, Just seeing them. What they were saying and doing was not interesting.

And Paris Geller, Rory's old high school friend is now running a surrogate child facility. She shows people brochures... in addition to yelling at staff. She seemed to have such big after college dreams and I was sure she would have moved away to a big city to live her important future life. That didn't happen, but her personality hasn't adjusted to deal with the shattering of all her dreams. In fact, she doesn't seem to notice.

Time has just gone by and this is where she is. Like everyone else.

Amy Sherman-Palladino gave herself a very difficult task: to reclaim her show after its controversial seventh season and reroute her beloved characters in a way that led them toward her famous final four words, but many years after she intended to. All the while she had to appease fans by bringing in as many characters and callbacks as possible, but not weigh things down in such a way that locked out new viewers. It was tough, but I think she did it.

It wasn't perfect, but the original series wasn't perfect either. Looking back, it had really schlocky moments, got melodramatic at times, and sometimes was just dumb. This revival wanders off into that kind of territory at times, too. But it also hit dramatic notes that the WB/CW version didn't. Alexis Bledel is a much better actress than she was, Lauren Graham is as charming and emotional as ever, and Kelly Bishop shows off her underrated skills thanks to a sad but rich storyline.

The format (four 90-minute episodes) sometimes felt rushed and other times felt too roomy. But it was a clever way to present a year in the life of these wonderful, smart, interesting characters. Now, who's ready for part two?

Given all they hype, I was a little disappointed with this. It didn't start to feel like Gilmore Girls until halfway through the last episode. It felt disjointed but it may just have been due to the fact that they hadn't worked together for 10 years. Even the main supporting cast seemed to appear as cameos in the first three episodes.

A must watch for fans of the original series. It had it's bad points - some storylines which made no sense and were quite frankly pointless, but I wouldn't let that put you off as some of the storylines were amazing and it has great nostalgia. Characters who weren't even that big in the original show were in this too so it really did feel like less of a comeback and more just like a continuation of the same show we all used to love!

No. No. The Dragonfly hadn't refreshed anything in 10 years? That's not how you get ahead in that business. Rory worked so hard on getting an amazing future just so she could not have it? Also she seemed to feel so entitled? Relationship with Paul and Logan? It all felt so wrong.

Plus points for Emily's character development and bringing back the Life and Death Brigade. Also Kirk's pig. The wedding was pretty too.

Sadly it did not live up to the hype. Summer was not so good but the rest was perfect

OK, lets talk about it!! You wait 9 Years to conclude the Story and u leave as with this ending ??? WHY ?? Episode 1 and 2 - Perfect loved it, No time past, I felt 15 again watching Gilmore girl ♥ Beautiful. Then Episode 3. Why the Musical. Wasted time you could have used for the other characters ? Lane ? And then ending of the Episode 4 . Yes Amy Pelledino it was your most wanted ending. But we already hat a similar ending 9 years ago. Beautiful 4 words. But now there is one 5 episode missing !!!! PLEASE !!!! Cant deal with it !!

I normally don't watch series over again, but I decided to... Gilmore Girls brought back a lot of love and hope with this revival. But I do have to say... the only person who didn't get the ending I wanted was Rory. I'm disappointed in what happened with the plot, but I hope for everyone's sake the Palladinos (writers and producers) come back to make a part two. Otherwise, this will literally be a disappointment for me and the series.

Loooooong with a wtf end. But, very nice and nostalgic to see the characters once again. This was everything I needed, but I wasn't satisfied with the ending. I NEED MORE, AMY!

Not as I remembered it and I felt disappointed about the ending.. I love how all the originals were in the show! I wish I could have seen more Sookie! I don't understand what is going on with Emily. If they decide to continue this show on Netflix they should definitely address what is going on with her. I loved the cameo appearances Alex Borstein, Mae Whitmer, Vanessa Marano and Peter Krause (Lauren Graham's boyfriend)!! The end was perfect because it makes sense!!! Logan can't get married now!!

Underwhelming and disappointing. It was fun seeing the cast together again, but other than that, I thought it was awful. And the final four words were kind of a letdown too. That's not how you conclude a series. If that was the original ending that Amy Sherman-Palladino had in mind the whole time, I'm glad she quit before season 7. I liked that finale better. It was more conclusive.

Marvelous! If you liked the series before, you will not be disappointed :)

Some are disappointed because they have spent the past 10 years dreaming up the absolute perfect life and perfect story for these Gilmore Girls--just like we all do about our own futures--but what they got instead was a realistic continuation of what was. First episode amazing. Loved it. So good. Second was okay. Third was confusing and trippy and just all together a let down. Fourth was also trippy and odd but amazing . So great. Watching again

I woke up at 1 am when the show was released on Netflix to watch the revival, with coffee and cookie dough at my side. I liked it for the most part (the pool scenes were a bit weird and over the top) but I laughed and I cried and squealed and screamed. There were so many familiar faces, so it was very sweet to return to Stars Hollow. I'm not 100% happy. I guess Amy wants some things left up to the audience's imaginations, but I just want to KNOW, you know? Anyway, be prepared for a ride.

(SPOILERS)
I have been extremely excited for this revival, it was borderline insane. I fell in love with the original Gilmore Girls nearly 10 years ago when I rented that first season knowing nothing about it. Since then I have watched the series 6 times full through. So you can guess I love this show. I was a little scared for the revival, maybe it would be totally different, maybe it would be so bad I would hate Netflix for bringing it back.. but how could it be so terrible with the original cast and original writers at the helm? I stopped worrying and when the 4 episodes became available to me, I sat down and watched all 4 of them without a break. It was different, it was weird, I always wanted her to end up with Dean (unpopular opinion) even though I'm happy his character is happily married with a faceless Jenny (could be tribute to his costar Jensen on Supernatural, who knows).. but it was amazing the way it was. After I watched it I was so mad she was with Logan throughout, I never liked him, and cheating on his fiance was crap (but also like him to do). I knew those 4 final words would be those 4 final words.. everything comes full circle with these Gilmore women. But I loved it all. This revival is just as it should be. Rory has always been kind of bad at making decisions, and usually winds up down a road that isn't very good. Anyway, yeah there some awkward scenes that lasted way too long (cough cough, that musical?!) and some parts seemed forced for nostalgia and cheesy in their execution.. but Gilmore Girls has always been a little bit cheesy, and a little bit fast paced.. and that's what this revival was. I never doubted the original writers ability to perform and it was very well done and hit a heart string in all fans of Lorelai and Rory. I cried, I laughed a lot, and I related to the situations even though I am not personally dealing with the things they are. Either way this was a 5 star, re-watch, high praises to the original cast and Netflix for doing this. Thank you, I enjoyed every hour.