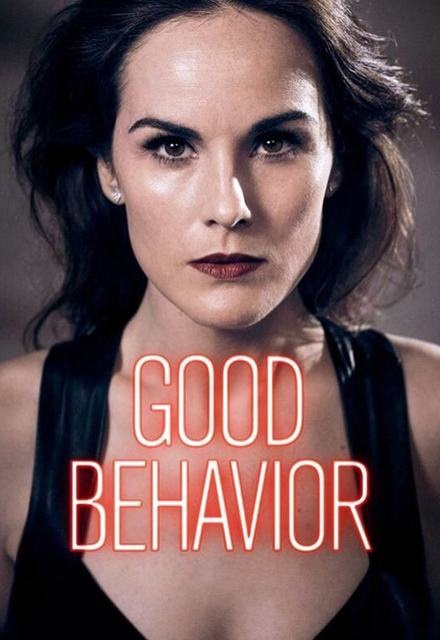 Avg Rating (0)
Your Rating
Sundays, 10:00 PM EST on TNT
Tracked 4,058 Times
Concluded
2 Seasons, 20 Episodes
60 Minutes
Buy or StreamAmazonAmazon UK
Drama TNT
Based on the Letty Dobesh books by Wayward Pines author Blake Crouch, Good Behavior was written by Crouch and Chad Hodge and tells the story of Letty Dobesh (Michelle Dockery), a thief and a con artist whose life is always one wrong turn, one bad decision from implosion — which is exactly how she likes it.
Share on: Most definitely a strong lead character, Letty, played brilliantly by Michelle Dockery, who you strangely root for despite the fact that she likes to smoke a bowl or two, is an absentee parent and a freshly out of jail grifter.

Unlucky for her (but not for viewers) that she ran into Javier, played by the excellent Juan Diego Botto, who's the sort of man who would get any girl into serious trouble (yikes!). I've always liked a good baddie, especially when he may not actually be as bad a person as we first think.

I've binged the first three episodes. Can't wait for the rest of the season.

After reading the synopsis for the show, Good Behavior sounds potentially interesting, but not terribly original. The former is true, but the latter is not. It is interesting, and original.

The show has a clear setup going for it which I think will work well for a procedural, and it's got a unique approach which we really haven't seen on TV since Dexter. The protagonists are anti-heroes. An ex con, conwoman, and a hired killer. After they become entangled, he continues to do his job, as she aids him. Together, they infiltrate, manipulate, grift, and ultimately kill. It's a well-paced high-stakes dangerous game if of life, death, and carnal desire.

Both characters are a lot more than what they do for a living, and although they are by no means good people, they are not without their morals. It's similar to Dexter in that respect, although the feel of the show is nothing like Dexter. It actually feels more like Leverage... the process they go through to isolate the victims feels similar to the plans they hatched on Leverage. Only, rather than helping people, they are killing them :)

Give it a shot!
A solid 4 star pilot.

Loved this program. We DVR'd it and let the shows add up. Then we had a marathon. It wasn't planned, but after watching one episode, we had to watch the next. Then the next, and the next, and we spent the entire weekend watching this show. I have to tell you my husband is not a TV watcher. He can't sit for it, has to keep moving. But, this kept him in his seat! Really hope they bring it back. I watched episode one and two of this series yesterday and gave it 4 stars... I've just had to change my review to 5 stars because 24 hours later I can't stop thinking about how good this show is!!

I watched Animal Kingdom recently (another brilliant TNT show) and this new show delivers even more in terms of raw reality and emotion (not that I'm suggesting being aide to a killer is the norm). I don't want to like Letty, but I do. She's obviously smart, but makes dumb choices. I can relate to this (minus the drugs and alcoholism). Plus the show is just sexy AF. 5 Stars from me.

A real bad ass woman who teams up with a bad ass man. Stories are always interesting and the overall story moves along at a good tempo. She has a son who lives with her mother though she still is quite a good mother all things considered.On the downside is her drug taking (at times) and her shoplifting. His downside is that he is a hit man! What a combination.! Somehow this pair have fallen in love and look out for other. Can't wait for this to return!

I wait for some episodes to go by, before I judge a series. Good Behavior started slow, introduced us to the two main characters - Letty, a drug abusing kleptomaniac and Javier, a contract killer. This show, at least so far, is not purely about their misdemeanours as such, but their personal point of view and the background from where they came from. We tend to judge and believe in any propaganda right away, but there is always more going on than we realise. And Good Behavior is like a mirror in that sense. I hope we can explore these characters much deeper and that this show keeps that level of sophisticated story telling for a very long time.

This show is compelling. Unstable & drug addicted thief Letty displays contradicting personalities. In private she is vulnerable, sensitive and scared. In the company of others she is smart mouthed and sarcastic. She's an intelligent and intriguing character that seduces me into caring about her issues of the day, but her love/hate relationship with her sexy kidnapper needs more work besides line after line of typical TV style 'witty banter'.
Great music choices in each episode so far!

Michelle Dockery plays Letty Raines, a junkie ex-con whose terrible decisions — and an attempt to do something good — lead her into a dysfunctional relationship with a charming hitman (the fantastic Juan Diego Botto). Letty also battles a nightmare of a mother, who won't let her near the son Letty's unable to raise. Working with wigs and multiple accents in the premiere episode, Dockery shows just how talented and charismatic an actress she is. And the story has a ton of potential, shifting gears after the premise is all set up.

Good original show. A refreshing change from some of the reboots we're starting to see.

I am extremely impressed by this show! It is a mixture of gritty drama with some dark comedy thrown in to appeal to a wider audience. Letty is such a complex character with a troubled past and Michelle Dockery really does her justice! Letty and Javier are a force to be reckoned with; I love them as an unofficial couple. I'm so excited for S2; I hope that it lives up the the greatness of S1. This show rocks! Michelle Dockery is showing her versatility in this role, which is so far removed from Lady Mary she won't get pigeonholed into a specific type. Juan Diego Botto is the perfect mix of a really great guy who does bad things. This show is a testament to how much parental actions affect every one of us - for good or for bad, but there also comes a time when we are adults and have to take responsibility for our own actions and getting all the crap that once filled our heads right the hell on out of there. We don't pass on all that garbage to our own children. The cycle has to stop somewhere, and it's not easy to do. This show portrays it perfectly. Ok... 1. Decent looking guy who happens to have an accent makes him hella hot. 2. The other side of Mary (Downton Abbey reference) all together in this show made me want to watch it. I totally forgot I tracked it until Xfinity showed me a sneak peak to the series....
All I can say now, Tuesday is my favorite night for watching T.V. now....

This is written after watching seven episodes and I just can't believe how good this show is. Episode 7 just blew my mind away. I like to see if I'm gonna stick with the show after a couple of episodes and this show keeps me wanting more and more, counting the seconds of each episode, wishing it was longer. The acting, the plot, this is another level stuff, award winning drama.

Really great show that ties the trials and tribulations of a woman attempting to get her life back on track but having to fight the temptations of the bad at every turn. The chick is hot and the show has decent noirish tendencies, It's pretty good.