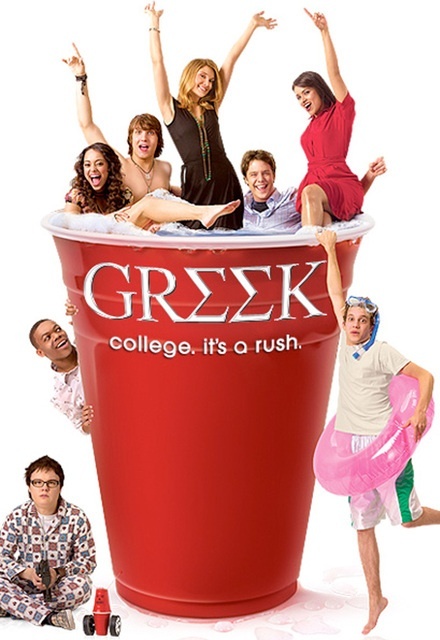 Avg Rating (0)
Your Rating
Mondays, 9:00 PM EST on ABC Family
Tracked 22,133 Times
Concluded
4 Seasons, 74 Episodes
60 Minutes
Buy or StreamAmazonAmazon UK
ABC Family Comedy Drama Teen Teen Drama
This show is about a super social sister and her anti-social brother who are both dealing with living the Greek life in college. The series focuses on a group of college students in and out of the fraternity and sorority system at a campus. Set at the fictitious Cyprus-Rhodes University, which focuses on the social minefield that is the Greek system. We will see the characters through this treacherous terrain as they try to find their place at this University or one of the Greek houses such as "Slacker" Cappie's house or "It Girl" Casey's house.
Share on:

I watched this series over the 4 years of my own college experience. The characters were definitely likable and the sets were great. But I think the most important aspect of this show is that it doesn't come off as preachy. Yes, the characters usually have their moral compasses on point, but you get to see them go on a journey in order to figure their lives out. And I feel like that's what college has been like for me too. Just a lot of stuff being figured out without my realizing it, because it usually goes by so quickly. This show projected a lot of my happiest memories. Maybe this isn't the most unbiased review, but I personally loved this show and would definitely recommend it to (future) university students. I would re-watch this entire series over and over. I was devastated when it concluded, it's real in a real way... as a fellow greek it gives an aweful incite to what we really do. but on the other hand this show is hilarious and entertaining Just finished re-watching Greek and loved it just as much as I did the first time! Such a fun show and so sad it's over!

This was a pretty good college show. Its a little different from other teen shows as it really focused on the Greek system in college and it really opened my eyes to what a sorority and a fraternity really are. I actually didn't even know what they were before I started watching this.

Thia TV show was fun. The campus life of the greek system with a funny touch.

I enjoyed the characters in Greek. The females were not wusses who always waited for the guys to take charge even though sometimes they got a bit nasty, they were real, and the little brother Rusty was a good person but I loved his holier than thou roommate.

Definitely worth watching, Greek is a fun show with lots of over the top and extravagant parties and pranks, but is ultimately about the college experience. This show does a great job of highlighting the journey and struggle of "finding yourself" and maybe going out of your comfort zone to do so. This allows the audience to really experience the characters growth and become invested in the show.

A really fun show to watch! The best thing for me about the show is the relationship from Rusty (brother) and Casey (sister). Casey is a few years older. When Rusty comes to Cyprus Rhodes college. They did not have a great relationship at all. But going to the same college changes all that. And there are some up and downs but through the seasons they become closer as brother and sister.

So much fun and definitely pegs some of the aspects of greek life (while also overplaying others, but at least it doesn't rely entirely on the stereotypes). Makes me nostalgic for college and my sisters!

Loved this show so much!!!! Always regretted not being able to go on to university and have that and this show just makes me wish all the more I got to have that experience.

It was ok. Funny but not tremendous

This was a fun dramedy, and I enjoyed it. It changed my view of frats and sororities a bit. Debuting in 2007, Greek focuses on Rusty (Jacob Zachar) and Casey Cartwright (Spencer Grammer), a brother and sister who attend Cyprus-Rhodes University. Both are members of a fraternity and sorority, but it’s not just about Greek life.

The stories are about growing up and becoming adults, figuring out who you are and who you want to be. It’s a sudsy drama, but at its core, it’s a light-hearted, comical show that reminds me fondly of my college years.

Maybe I have a connection because I remember the not so wonderful and the slight awesome parts about being a sorority sister. But regardless of what drew me to watching the show, it’s the talented, young cast, sharp writing and a good vibrations-type of feeling that keeps me invested. I always walk away with the sentiment that your friends are also truly members of your family.

Fresh and funny with a drop of drama, that's what Greek is about. It's funny to see how the characters come to grow. We knew since the beginning that it was due to end after 4 years but when that time came, it was hard to let all of them go.

As a member of the Greek system, there's not much truth to a lot of that's represented, but I still love the show. It's part of the reason I started thinking about joining Greek life, although I knew tv =/= reality. Good show with good cast. Enjoyable.

I was never in the Greek system, so I cannot speak for the accuracy of this show, but I can speak for the enjoyment I got from watching the drama between the characters in their various relationships. There is a nice assortment of characters (the nerd, the drunk, the prep, the drama queen, etc.) which adds much color to this show.