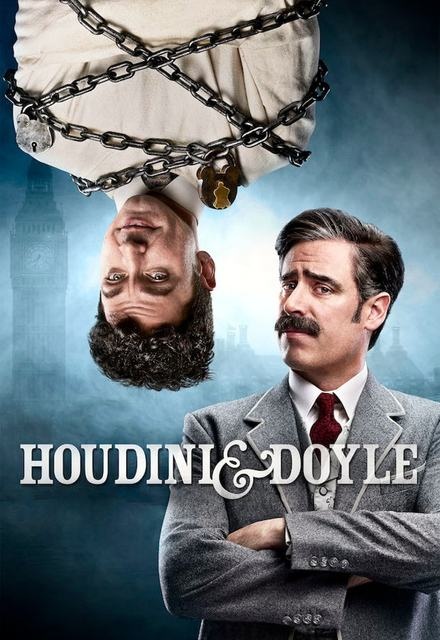 I am really enjoying this show. The juxtaposition of Doyle, author of the most logical detective ever, also being engrossed with the supernatural, against Houdini, the master of mystical illusion, defending the pragmatic and logical, is a masterful pairing. Adding in Constable Stratton and the dismal past of London, which lends itself to sinister acts and darker explanations, comes to equal fantastic TV.

I can't believe this has been cancelled! I thought it was a really innovative style of show & I really enjoyed it! :(

Houdini & Doyle touches the aspect of the paranormal and the Elementary of persistent detective work. This British period crime drama is a very nice watch with a beautiful cast and a persistently intriguing storyline. There is a competition between (Doyle) the supernatural and (Houdini) the procedural method of detective work to derive answers to crimes. The way the writers intertwine the two is very well done.

This is marvelous!
I really like the characters. They make a great team. Their cases are solid, I just loooove their accents and their interaction always makes me laugh.
Keep it coming! I hope there will be quite a few more seasons to come. One of the best shows on TV in a while. Thinking outside of the box makes this show different. Who would have thought about teaming those two up for a crime show? Brilliant!

This show was very good was very sad to see it canceled.

This is a great series but when does it continue? It wasn't finished on the last episode surely?

it was a nice show.
the only thing i can say is F***K OFF FOX It's refreshing to see a new concept of a British period crime genre. This is the first new idea for a show in a long time. The way the characters interact is amazing. I've rewatched every episode and I have to say if you're not paying attention towards the end you'd miss the subtle glimpse of the paranormal, that is most often a quick don't blink or you'll miss it, that leaves the storyline open. Or during the show almost all of the details match up, yet there are some details that cannot be explained. Awesome show and I love when shows make you rethink what you thought you knew. No more remaking shows or turning movies into shows. New ideas are where it's at.

A light hearted period drama which uses the supernatural as a possible explanation for crimes which are committed. It highlights the plight of women in the police force but gives a funny slant on the usual heavy 'bad guy, chase caught by cops' theme.

Really like this show. The interactions between Houdini and Doyle makes me smile and enjoy the show even more...