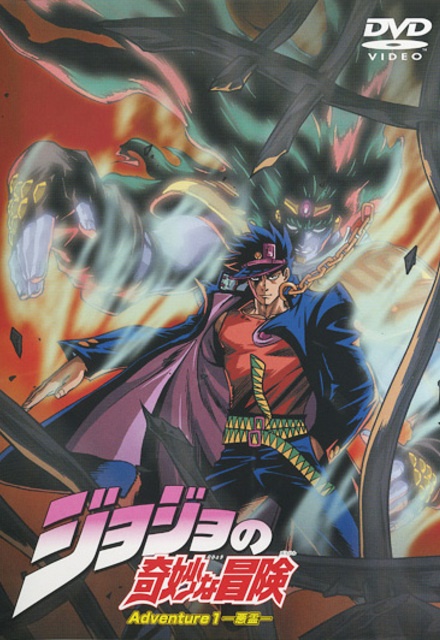 Avg Rating (0)
Your Rating
Sundays
Tracked 68 Times
Concluded
1 Seasons, 13 Episodes
Buy or StreamAmazonAmazon UK
Anime Japanese Anime
an original video animation adaptation of Hirohiko Araki's manga series of the same name, JoJo's Bizarre Adventure. Produced by A.P.P.P. (Another Push Pin Planning), it was adapted from the series' third part, Stardust Crusaders. Originally only six volumes were released that started in the middle of the arc, but six years later, seven more volumes adapting the beginning were produced and released by the same staff. A six-volume series, released from 1993 to 1994, begins with Jotaro Kujo, Joseph Joestar, Jean Pierre Polnareff and Noriaki Kakyoin in the Egyptian desert on their quest to find Dio Brando (volume 20 of the manga). The series offered very little exposition, assuming the viewer already knew the back-story, and takes several liberties with the events of the original manga. A prequel seven-volume series, titled JoJo's Bizarre Adventure: Adventure, was released almost six years later, from 2000 to 2002, using almost the entire same staff. It offered an explanation for those unfamiliar with the story in the previous series, starting with Joseph coming to Japan to explain Jotaro's strange behavior (volume 12 of the manga). It would not be until May 25, 2007 that both series were released together in Japan in a DVD box set, which included a soundtrack CD and a set of 31 tarot cards illustrated by Hirohiko Araki. Both series were released together as one in North America by Super Techno Arts. It was released on six DVD volumes 2003 to 2005, dubbed in English and put in its fictional chronological order (series 2 before series 1).
Share on: