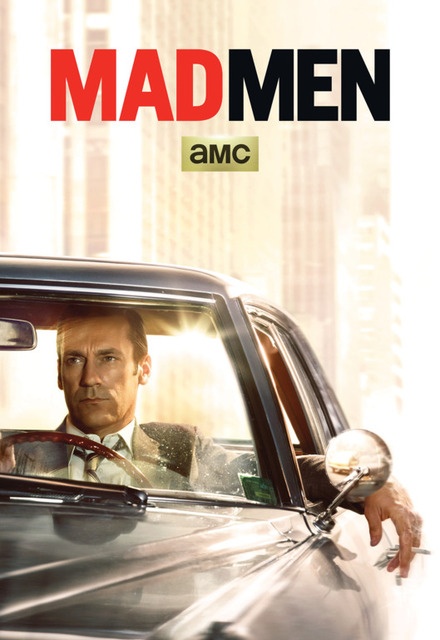 be transformed into another aera! i so want to smoke & drink whiskey whenever i see don draper.

Great show. Bad episodes or strings of them are saved by incredible scenes. Great acting.

I know it's oustanding, the attention to detail is unmatched in a modern day show set in the '50s, '60s but when there isn't one single character I like or can even identify with then I just don't want to know. Everyone I know loves it, it's just not for me. I have to admit that I have a harder time finding anything good on television nowadays. I feel that either the quality of the shows are slowly diminishing and/or the shows that I do watch keep getting more repetitive as I keep on watching them. Because of this, I keep getting more underwhelmed by this form of entertainment. I bring this up since it's refreshing to know that there are programs out there that don't exist simply to repeat itself for the sake of its audience, but exist for the sake of bringing something new to the table. I like it when the purpose of a program is to explore the lives of the characters that they follow and the dilemmas that these characters undergo. This is what makes a great television series, and AMC's original drama series "Mad Men" is certainly a great television series. Not only does it put almost everything else on television to shame, but it's also probably my favorite television show on right now.

The show is set in the 1960's and follows one of New York's most valuable advertising agencies, Sterling Cooper. While it mainly follows the shady yet talented advertising executive Don Draper (Jon Hamm), it also looks at the people in his life both in the office and at home. Among the characters we follow are Don's secretary Peggy Olson (Elisabeth Moss) whose creative ambitions eventually make her a copywriter, young and spoiled account executive Pete Campbell (Vincent Kartheiser) who accidentally learns about Don's troubled past, Don's seemingly perfect wife Betty (January Jones), head of the secretaries Joan Holloway (Christina Hendricks), and one of the agency's two senior partners Roger Sterling (John Slattery) who formerly mentored Don.

One of the major reasons why I love "Mad Men" as much as I do is because of the characters. These characters are not only well developed by the writers and well acted by the performers who bring them to life, these characters also feel like people that exist in real life and I am able to identify with whatever situations that they are going through. I find the character of Peggy to be particularly strong and well thought out. I love how the writers made Peggy a woman who wasn't interested in impressing her drooling male co-workers like her other female co-workers might, but instead just wants to make a name for herself in her profession. Because of the fact that she's also a very likable character, I was able to really hope for the best with Peggy.

I also enjoyed the character of Roger Sterling since he steals every scene he's in. I liked how sharp and straight to the point he was, and I loved how calm he always seemed to be regardless of the stress he's faced with. It's as if he was subliminally not giving a crap about anything and that having a drink is part of the solution. Though he's not in most of the episodes, I enjoyed the character of Bert Cooper (Robert Morse) as well since I liked how he insists on having his employees take off their shoes whenever they're in his office and also how he walks around the agency only with his socks. Basically, I get great enjoyment off of the character's eccentricity.

Furthermore, even though the characters of Don and Pete commit some despicable actions, the writers were wise in not making them antagonistic. While we may not look up to them in season 1, they eventually start to show glimpses of their inner good come season 2. I am absolutely thrilled whenever television shows like this play with the audience's expectations in that way since it makes the characters more three-dimensional and more real. After all, there are people out there in real life that we meet who we don't care for at first but we eventually start to respect as we get older. Let's talk about the eye candy also known as January Jones and Christina Hendricks. Along with playing smart and likable characters, Jones and Hendricks look absolutely amazing in this show. Whenever one of them is on screen, my eyes are automatically drawn to them they look that spectacular. When one of the characters said that Betty (Jones) looks very much like Grace Kelly, I said to myself, "No truer words were spoken." With their naturally pretty faces, their great physique, and their colorful dresses, I take great pleasure in seeing them every time they're on screen.

What also makes "Mad Men" such a special television show is that we can make our own interpretations of what the show is about and we wouldn't really be far off. For instance, I believe that the show demonstrates the importance of two simple main ideas. One is temptations becoming addictions and another is the evolution of women's roles in society. When I say temptations becoming addictions, I'm talking about people doing things they shouldn't be doing but having trouble resisting and doing it often as a result. Good examples include Don sleeping with countless other women behind his wife's back and the countless amount of smoking and drinking everyone does in this show. With the evolution of women's roles, Peggy's story serves as the ultimate example of that for obvious reasons in that she is more interested in her work that her love life. In my opinion, "Mad Men" does everything right with its acting, writing, and directing, and continues to be my favorite show on television.

I really enjoyed the first 4-5 seasons of the show. However, it got boring and dragged on till the end. The last season was good though and a good end to the series.

Mad Men is a strong period drama depicting the power of man over women and deception over truth. I do believe that it has gone on for a little too long. The first 5 seasons are good but now it's starting to veer away form its usually strong script and captivating acting to something that just seems desperate. There is deception, lies, love, betrayal, power, lust, drama and greed. I recommend this show to period drama lovers, give it a chance maybe you'll see it differently.

its a great show

'Mad Men' follows a Manhattan advertising firm and more precisely, Don Draper, one of the big shot account managers. Set in the early 60s, the series evokes everything of that atmosphere; the first big brands and ads, sexism in the office, heavy afternoon drinking (and smoking), the big hair and mod style. Ultimately, Don Draper is a tormented family man and goes through stormy relationships with the women in his life. However, in the end, our main man finds some peace of mind, as the series reach an ultimate cool conclusion — just in time for the hippy 70s.

I found in this series one of the most charismatic characters in the series, Don Draper, is simply sensational plays and leads the series to another level.
Of course, specific humor 60s, the plot carried to the extreme. a series that you can not miss neither bored nor. Packs has good plot, believable characters, masterfully interpreted. An X-ray of a society in full swing, where are all are conflict / drama in the family, at work, in relationships. I look and I wonder, how much smoke in that period, women compete with men !! Interestingly presented the status of women and attempts to exit from male domination.
made perfect in terms of details, sometimes get lost in details, the distribution is very well chosen and has a sensational benefit. The plot has many series and going on several levels. It is tasteful, subtle and funny, smart and has a touch sexy in the most decent way. He joined the podium of my favorite serials.

This show started out so strong! I was hooked from the first episode. It was very powerful in the first couple of seasons but then it started to lose something. I struggled through the last season. It is still worth watching in my book.

So creative and different, have never seen a time themed show this intricately studied before. Every episode i watched i felt like i was in that era. personally i am into the comedy and rom-com genre which is the only reason my rating is 3.5, but that being said it still kept me entertained every week and kept me coming back for more.

A great period piece, with the women of the story being the most interesting.

Oh this show is just absolutely addicting! At times after watching to many episodes in a row you need a little break, but not for long! I love the era it's filmed in and just everything about it.

I love the drama, the secrets, how great that redhead looks in every episode. I don't know something just lures me in.

Lost my heart for this. Don Draper's downward spiral mirrored my own when it comes to this show. I lost interest after a while and continuing to watch was more out of obligation than enjoyment.

A very sexist show, yet I can't stop watching. I just takes me back to my days in NYC ♥

Slick and stylish. Some great characters although Don Draper can be at times infuriating but worth a watch for Elizabeth Moss' Peggy and Christina Hendricks' Joan.