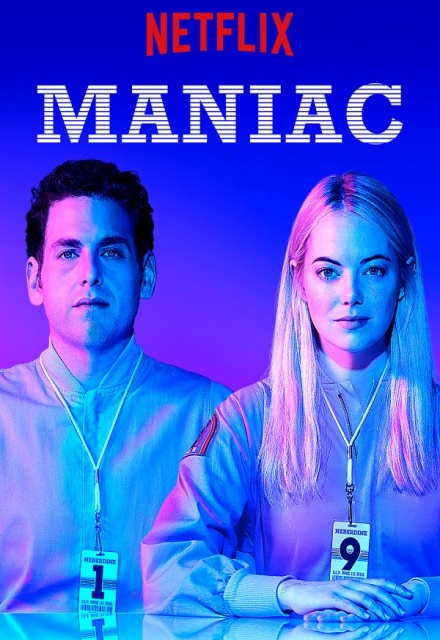 Avg Rating (3.75)
Your Rating
Fridays, 3:00 AM EST on Netflix
Tracked 2,242 Times
Concluded
1 Seasons, 10 Episodes
30 Minutes
Buy or StreamAmazonAmazon UK
Comedy Miniseries & TV Movies Netflix
Maniac is an upcoming American dark-comedy television series by Cary Fukunaga, expected to premiere on Netflix in 2018. The main roles are played by Jonah Hill and Emma Stone, and the series will consist of ten episodes.
Share on:

I watched the whole 10 episodes and its the worst show ever. Its not that its hard to understand, there just isn't anything too understand. The plot meandering from one mind delusion to the next in an 'everything and the kitchen sink' approach to pretending there is a plot.

I will now simulate the writing process for this series...

"Ok, let's write a series where we combine the movie Brazil, the movie Cloud Atlas, the movie The Matrix or Total Recall(take your pick on the virtual reality/mind delusion movie reference), the movie War Games, and several other movie and book references... to try to fool the audience into thinking we writers are smarts."

This is the conceptual problem... when you combine two primary paint colors, you get a third color, but if you keep combining paint colors you don't get more and more colors... you get brown... and then it just stays brown no matter what you add. This series is that brown mess of layer upon layer of references folded into an ugly nearly incoherent narrative palimpsest. But there is no enigma hidding underneath. Its a series of hollow russian dolls. Its moldy Wonder Bread.

I kept waiting for it to get better, to somehow cohere into something profound and wrap up into a fulfilled hero's journey, but it never does. The moment the guy tells the truth is the painfully obvious ending even at the beginning. There is no revelation. He hasn't grown. He still doesn't know what is real and even ends up in a mental institution in the last scene. The ending actually was right out of The Graduate. Ok, we made it out, we are free, now what do we do? I know, write another crappy season and get paid by the desparate and woefully out of touch Paramount studio. Cha Ching!

And cigarettes, lots of unneeded cigarette smoking. I hate this in shows. They should be ashamed of themselves. Just teaching kids to smoke and get cancer.

ALL REVIEWS FOR MANIAC »