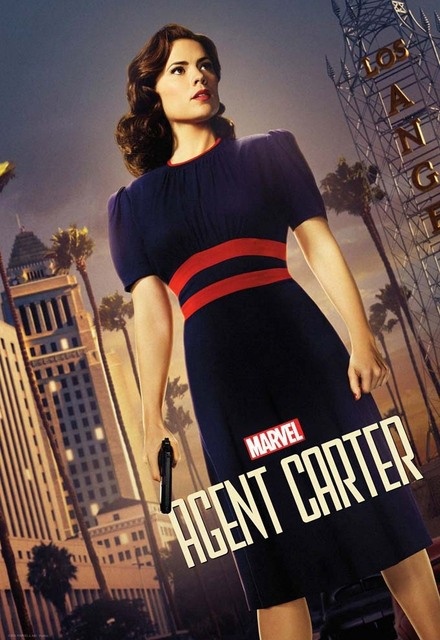 I love this show so much. It's what I wanted Agent's of SHIELD to be. Fantastic writing, great pacing, fabulous cast and a talented lead. I expect great things. Waiting week to week is becoming hard!

A perfect addition to Marvel's universe, Agent Carter pulls off a very good first impression in the first episode, something that viewers of Marvel's Agents of S.H.I.E.L.D. didn't feel that they received. Agent Carter's 1940s and film noir influences tie in fantastically. Peggy Carter (Hayley Atwell) is a fun and interesting character to watch as she navigates through and complex mystery while dealing with both her co-workers and personal life.

Agent Carter takes place in 1946 New York City during a time when women in-the-workforce were not held to the same expectations as men. Haley Atwell reprises her role as Agent Peggy Carter from the 2011 MARVEL blockbuster, Captain America: The First Avenger.
Distraught after losing Captain Steve Rogers to Ice and frustrated at having lost her coveted position of importance in the US army –where her skill and opinion were invaluable to Captain America—Agent Peggy Carter is returned to the mundane clerical work only befitting at the time of a woman at a New York City police precinct.

Licensed for an 8-episode miniseries format, Agent Carter has opted to take a serialized approach in which Agent Carter, along with the help of Mr. Jarvis (James D’arcy) work to clear the name of Howard Stark (Dominic Cooper) who has been framed as an international terrorist without letting her male-coworkers know what she is up to. Carter is an extremely strong, active lead character. She chooses not to let the gender discrimination of the time hold her back from making a difference in the world and still she is not afraid to use her feminine wiles to manipulate men in the field.

With themes of “espionage” and “counter-terrorism” fans of the recently cancelled long-running USA series, Covert Affairs won’t have far to look for a replacement to their beloved female-lead fast-paced, action-packed spy thriller.
Agent Carter will be standing in for ABC’s Agents of S.H.I.E.L.D in its off-season. There while there are bound to be many comparisons flying around because of this as well as Agent Carter being the next Movie-to-TV adaptation/comicbook-esque show to populate our TV schedules –try to put those comparisons on hold until you’ve seen the Pilot.

(A-) For Strong character development, excellent action choreography, good casting and an extremely solid pace for a 60 minute drama.

Just watched the first two episodes. So far it's good. Not as good as Agents of SHIELD, but still good. I do hope it gets better though.

Not much to say, AWESOME work by marvel, once again!

Another great job in showcasing some more of the Marvel Universe

I was a skeptic at first - "how could one make a tv show centered on a relatively unknown minor character" if anyone knows its Marvel. This dramatic time-period series is ultimately one of the best I have seen. It has its hooks in all the right places and never ceases to disappoint. This is definitely a show to watch for people who are fascinated by period television as this is definitely part of a genre that is very difficult to get right!

Love the 40's charm of the show, it comes over so well. The actors are so great!!! Loved the show from the beginning. They have to renew it! So far this show is great! It doesn't show a superhero impervious to the evils of the world. It portrays a woman often visibly frustrated by the discrimination she faces everywhere she goes. She fights on and is far better than her colleagues despite being close to wits end at all times. Also, just a very entertaining show with a fantastic cast.

A charming and delightful show over before its time.

I love this show. Peggy is badass, independent, and smart. On top of all that she is also really stylish (I would steal for those dresses) and played by an amazing actress! Hayley Atwell really makes Peggy Carter come alive for me and I adore every minute I get to watch of this amazing combination. James D'Arcy also portrays Jarvis perfectly. He is the perfect mix between the AI we all love (the snark is amazing) and a completely new character (because really, AI JARVIS is the Tony Stark retelling). The perfect cherry on top is the surprise Rose (Lesley Boone) brought to the second season :D

I really am hoping they will make a season 3, but even if they don't, these two seasons were absolutely wonderful & I hope Marvel will create and bring to life many more amazingly kick ass women! A Marvel series with an extremely strong female lead. It feels very Marvel when you're watching it and although maybe not as good as some of the other Marvel series it has room to grow and develop. It has very watchable and likable characters and is easy watching

love how it is about carter Not just a super fan of the show, and Agents og S.H.I.E.L.D. But Agent carter is fantastic, has a good confidence, great inspiration, an upbeat and amazing list of music. It has character. And shows how a challenge for women it was and is. Great action and story line! I really hope they don't stop filming the show!
Love - Marita

Agent Carter so far is pretty good. It was off to a rocky start in the early episodes, however, once we got around half way in, things got a little more interesting and some of the early set up really started to pay off with the revelations in the later episodes. The short number of episodes is good, the performance from Hayley Atwell and the rest of the cast is great and the action is very nicely done.

Here is the 'strong woman superhero series' we have been waiting for, except she isn't a superhero in the original sense; she has no powers (yet). I like it, but I hope it gets more of a story and less 'look at this woman kicking ass', cause we already know women can do that! Agent Carter is a brilliant, exciting new show! Hayley Atwell portrays Agent Peggy Carter brilliantly! Her character is fierce, courageous and sexy. The show does well, balancing an accurate portrayal of women in the workforce post WWII with the intense action-adventure theme known for in Captain America. Additionally, the old-school technology gives the viewers a much-needed break from the complexity of Carter's sister show, Agents of Shield.