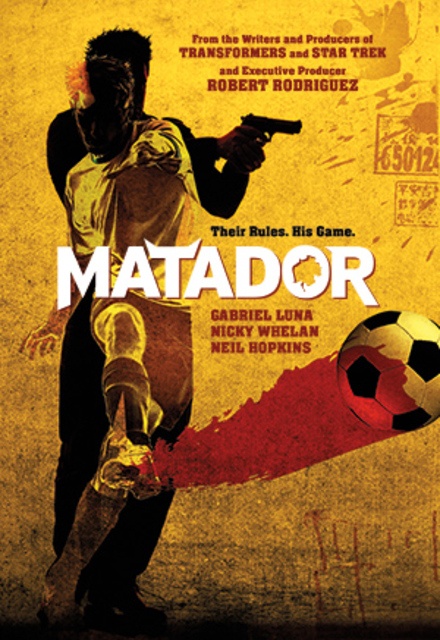 Avg Rating (3.21)
Your Rating
Tuesdays, 9:00 PM EST on El Rey
Tracked 919 Times
Concluded
1 Seasons, 13 Episodes
60 Minutes
Buy or StreamAmazonAmazon UK
Action Canceled Crime Drama El Rey Spies Spy Drama
The series chronicles the rise of popular soccer star Antonio "Matador" Bravo, known for his ventures both on and off the field. Unbeknownst to the public and his family, he is also a skilled covert operative performing missions for a branch of the CIA.
Share on:

i've never in a milion years expected a spy drama about a soccer player,not to mention it's about an american soccer player or as we the rest of the world call it FOOTBALL. :) i'm a huge football fan and i also love spy dramas,so that show spiked my interest and you know what is much much better than i expected.so if you like football/soccer you should definitely watch it and even if you don't and you just like spy series you shoud check it out it's made with an interesting spin. El Rey delivers once again with Matador, giving "spy games" a new definition by incorporating the fast paced thrill of soccer with the calculated suspense of the espionage genre.

Cinematicly gritty, Matador portrays the story of Antonio Bravo (played by Gabriel Luna), famous soccer player hailed for his speed on, and improvisation in, the field.

Bravo is introduced as a drug enforcement agent in a brilliant scene wherein a usually par-for-the-course exchange with a rather comedic drug dealer ("Do your wurst") goes awry due to the loose lips of his shaky informant. The usual antics ensue and Bravo is taken on a high speed foot race through the backstreets of L.A. until finally coming out on an empty spanse to catch, and vomit all over ("I'm sorry I have to do this... I told you I don't do tequila."), his prey.

He is approached by the CIA, one an unfortunately cliche blonde bombshell and the other a bit of comic relief. They tell him that they want him for his speed and he is eventually tasked to join up with the L.A. Riot as a temporary deep cover operative. A number of key players are then introduced: Andres Galan the owner of L.A. Riot and teammates Alec Holester, Caesar a former dancer, and Zupan the Bull.

Galan Andres is introduced at his home mid-conversation with his obviously rebellious and oversexed daughter Senna. He offers us a rather boring (yea, yea, yea, get on with it) speech about fear that every one of us must have heard in that one Quentin Tarantino movie, you know the one.

During a well-played practice-for-the-tryout montage, Bravo's jailbird brother is also introduced. But who cares about that? He's barely mentioned other than the terms of his parole being the only thing which forces Bravo into his position as an operative with the CIA.

Matador earns his title at the L.A. Riot's tryout, defending himself against and skillfully taking down Zupan the Bull with a swift kick that clearly and almost hilariously breaks the giant's tibia. Insert groans here.

Galan has a yearly party for his players which is soon revealed as the primary target of Bravo's true mission, to transfer data from Gideon Khan's tablet. A plan is divised by Annie Mason who uses a cheap insulin trick to knock Khan out so Matador can go in for the data and hit him with an epi pen to stop his eventual heart-stopping overdose (cool to note: epinephrine actually does lower the amount of insulin in the blood stream).

Of course, the viewers should have no idea how Annie pulled it off in the first place, being that insulin (the dude was a diabetic) has been described as tasting both like milk and like old bandaids. Mmm I love me some bandaid flavored sherry.

An awkward scene occurs between Noah Peacott and Tony Bravo at mission's end. Peacott threaten's Bravo with a gun under the assumption of his uselessness to the CIA at which point Annie interrupts to inform them both that Bravo's continued deep-cover status would be absolutely necessary to uncover further actions by Andres Galan. Bravo's grin takes the cake as he delivers a whopper of a punch to Peacott's solar plexus.

All in all Matador's first episode was a good opener to the series with quick quips and phraises that tickle the giggle-bone and mile a minute action that keeps your eyes glued to the screen. I could do without the cliche baddies and the nearly see-through dress of the cliche bombshell though.

While reminiscent of hits like Burn Notice, and Covert Affairs, Matador has a unique position to really make something worth watching.

Thumbs down:
- "You should have seen the other guy"
- "Fear"
- NWO Reference
- "Enjoying the view?" nearly see through dress and her bad acting
- General thuggy bad guys everyone's seen in everything from Donnie Brasco to Kill Bill

ALL REVIEWS FOR MATADOR »