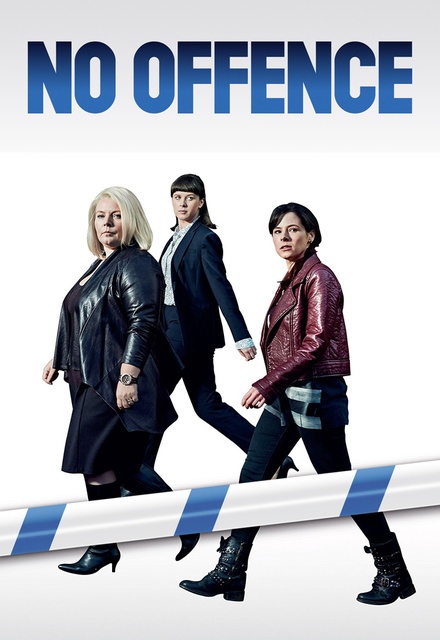 Love the quirky characters. Peels away at an ongoing plot while solving another one each show. A cop show with strong female leads interlaced with black comedy? Sign me up!

When you've watched pretty much every cop/ crime show out there, it's hard to be surprised by the storyline. But one minute into the first episode and I was already hooked. No Offence establishes a pattern where there is a long investigation going on in the background all through a season and then there are other crimes tackled every episode. The writers do justice to the sub plots without losing continuity of the main plot. The supporting characters (surprisingly) are given more dimensions and character development which is often not the case in most crime series.

With respect to the main characters themselves (the actors are amazing!), I like how we are shown an insight into their personalities and thought processes while still keeping us far away from their personal lives. Most crime shows are often taken over by romance and "who slept with whom" confusion. This isn't the case with No Offence. Even with Dinah who takes her professional life too personally, we only see as far as she'd allow us to and that's perfectly fine.

I very rarely sympathize with characters that take their jobs personally. But Dinah wins us over unlike so many characters that end up being a whiny pain in the a$$. One such character was Izzy Stevens from Grey's Anatomy. She just cared too much to a point where she was almost always a hindrance to her colleagues and patients. Dinah cares but she balances it out, toughens up and draws the line when she has to. She knows when she's about to go too far and stops.

I cannot begin to describe how much I love the "naughty but subtle" British humor. It's perfectly peppered into the plot and doesn't overpower the narrative.

100% recommend it if you're looking for a understated quirky cop show. (2 seasons are out. Not sure why only one season is mentioned int he episode list on Sidereel)

ALL REVIEWS FOR NO OFFENCE »