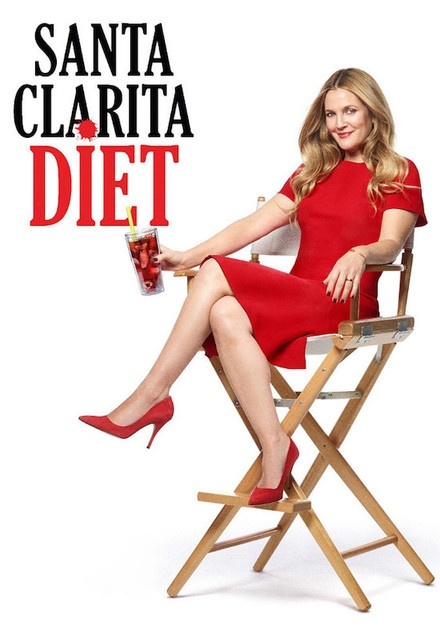 Avg Rating (0)
Your Rating
Fridays, 3:00 AM EST on Netflix
Tracked 6,448 Times
Concluded
3 Seasons, 30 Episodes
30 Minutes
Buy or StreamAmazonAmazon UK
Canceled Comedy Dark Comedy Netflix
Timothy Olyphant and Drew Barrymore star as husband and wife realtors Joel and Sheila in the dark comedy. They’re leading vaguely discontented lives in the L.A. suburb of Santa Clarita with their teenaged daughter Abby (Liv Hewson), until Sheila goes through a dramatic change sending their lives down a road of death and destruction…but in a good way.
Share on:

I'm not sure how I feel about this show. It's on Netflix, check. It has people who can actually act, check. It's about zombies and has recognizable undead tropes, check. Yet, I'm teetering in neutral: I don't want to give it a bad review because I watched all ten episodes nor do I want to spread the word by encouraging people to watch. I might have to re-watch it to see if I like this show, which doesn't exactly fill me with joy.

This show is so fun! I binge-watched it in one sitting. I loved the characters and the humour. Sheila and Joel are relationship goals. Drew Barrymore is amazing. Timothy Olyphant is really-really nice to look at. Seriously, how is he so attractive? I suggest you go watch this show now! And it better get a second season.

Santa Clarita Diet is a great oddball comedy that grows on you. It takes a little while to get used to the show's absurdist tone and unique sense of humor, but once you do it's fantastic.

It's the kind of humor you can't say that everyone has. I only lasted the first two episodes and this is because of the good actors! It was sooo disgusting at first, but it turned out to be hilarious! :D I ended up binge watching it. Definitely worth it!

Loved it! Hilarious one-liners and Drew Barrymore is the peppiest zombie I've ever seen! Multiple LOLs occured. This is so beautifully stupid, I LOVE it.

I enjoyed this show and wish it had another season. I get it, the plot doesn't really lend itself to several seasons, but I wish that it had wrapped up more neatly. Netflix needs to stop axing shows before giving them a proper sendoff.

i love this show, i want more episodes NOW

Such an intelligente humour! My favorite comedy of all times. And I don't even like comedy!

This is quite possibly the worst show I have ever seen.

A lot of blood and guts (a given on a show about the undead) but it's hilarious and smart. It can be a bit over the top at times, which is the point, and it's not gonna be everyone's type of humor, but you should definitely give it a chance.

Funny, witty, and definitely worth a shot!

I have very mixed feelings about this show, I wasn't overly keen on some of the characters or the comedy, but for some reason I couldn't stop watching and binge watched the whole season in one night! It is by no means an amazing show but does provide several hours of entertainment.

I am not impressed, I guess I just have a verrrrry different kind of humor.

I loved this series.. it was cute, funny, quirky.. Drew Barrymore and Timothy Olyphant we great together.. in fact all the actors were terrific.. the writing was awesome and I could see this series going more than the 3 year run it was given.. gosh they really left it on a cliffhanger for me..

On its best episode it almost reaches the level of meh. Such a brilliant combo : sunshine, zombies, not the end of the world, good looking people, gory deaths but not too much. And a nazi lobster pool !
I mean, zombies in the sunshine but that can keep their wits ?
The whole thing was AMAZEBALLS !
Why would you cancel it so soon ! Probs had another couple of good seasons under its belt.

They canceled it and it hurts a little because i'll never know what happen to Joel and Sheila and mr. Ball Legs, i'm sad, i really liked this show.