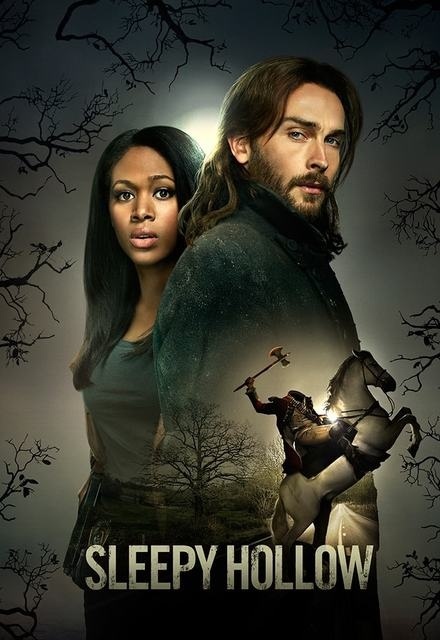 Avg Rating (0)
Your Rating
Mondays, 9:00 PM EST on FOX
Tracked 23,427 Times
Concluded
4 Seasons, 62 Episodes
60 Minutes
Buy or StreamAmazonAmazon UK
Action FOX Fantasy Supernatural
From co-creators/executive producers Alex Kurtzman and Roberto Orci, the thrilling new action-adventure SLEEPY HOLLOW is a modern-day retelling of Washington Irving’s classic. ICHABOD CRANE (Tom Mison) is resurrected and pulled two and a half centuries through time to find that the world is on the brink of destruction and that he is humanity’s last hope, forcing him to team up with a contemporary police officer (Nicole Beharie) to unravel a mystery that dates all the way back to the founding fathers.
Share on:

who can resists a british guy in a uniform? I cannot. additional monsters involved? great! the only thing that annoys me if the witch-wife-situation. just get rid of her already xD

Sleepy Hollow was really, really good, until it wasn't. Tom Mison and Nicole Beharie are amazing actors, and they play their roles extremely well; the nuance in Ichabod and Abbie's characters and in their relationship is so well-communicated to the audience that you've really got no choice but to root for their successes, even if you don't agree with how they go about it. The cast was great, they really made the stories line become real. Such a unique way of showing a well-known history. I had never seen either Tom Mison or Nicole Beharie before, but both were amazing as Ichabod Crane and Abbie Mills respectively. I like the modern reboot of this classic story. I like the way they have taken the era in which the original Washington Irving story takes place, which gives a nod to the man and story itself and skillfully brings it into the modern day. The production has high values, looks very cinematic, with good visuals and fast, interesting editing. It was deliciously dark, grim and even somewhat gritty, but with some nice aesthetics. Its witty, funny, fast paced and the action scenes are quite impressive. You really see the fight, Good vs. Evil, to become more intimate. More personal. You now see clearly aspects of this, eternal fight, that other movies and series want to avoid. The main cast had good chemistry, not in the romantic/sexual way, but more like the start of an interesting friendship. The chemistry between the two main leads was electric and the main reason for watching. The show suffered in later seasons due to terrible cast changes. Not surprising it was soon cancelled after the changes.

I saw season 1, left it for a couple of years. Didn't have the urge to get back into it. Season 1 was definitely good though.

The first three seasons are pretty great
but the last one can be skip, the storyline is weak, poor acting from the new cast

A history-thriller-fantasy fan would enjoy the first 2 seasons; but as with all series that start strong, this one loses its charm too. The 3rd and 4th seasons are a desperate attempt to stay relevant.

Fvkin'-A! I just finished the show and learned that it was the season finale! I know I said I wasn't going to cry anymore after the Grimm series finale, but here comes the waterworks again...I'm a mess. On the bright side, at least it wasn't the series finale.

I really like how they are tying the legend of Sleepy Hollow into the apocalypse. It has everything I need in a show....humor, action and a supernatural aspect.

Love this show. It's plays serious but Crane delivers just the right amount of humor.

I love this show its very entertaining. Granted there story plots have to be better.But the acting is A Plus. So Dont cancel it

Started out great but season 2 drags. It becomes really boring.

I liked this show at first, but then the plot just got more and more erratic. Main characters were played well and she's adorable. But stopped after a couple seasons.

The main characters are great, and I love this show!

Awesome show! I love the chemistry between them such good actors and very interesting storyline! 10/10

I liked the idea of this show, but by the end of the first season I was so ready for it to be over. I decided not to continue watching. I think the characters were just too annoying for me.

A little too much at times, but Ichabod Crane is a charming alien (at least to this society). Tom Mison is crazy good at it.

Never ceased to amaze me that's what i have to say about this series also ''Ichabod Crane and that accent so sexy. If you are'nt watching it's not too late to tune in mystery, horror, drama supernatural this show is filled with all that and more. Very interesting perspective on Sleepy hollow and the apocalypse with the four horsemen.