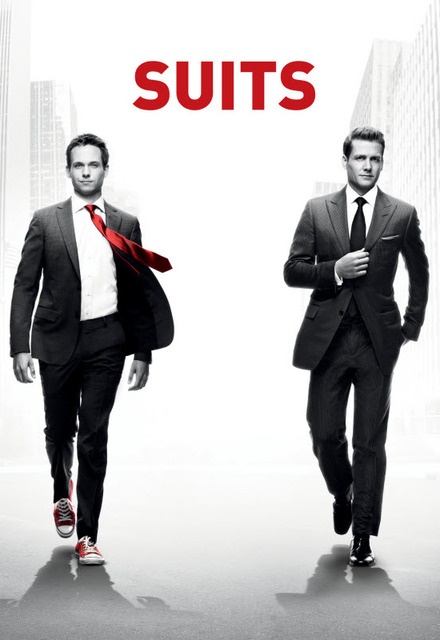 One of the best shows out there. If you can bear through the stupidities of Mike in the first couple of seasons, there is not a bad thing I can say about this show. ♥ Harvey!

Suits is a smart sleek legal drama that is still going strong. Filled with humor and featuring a very strong cast, USA's Suits is a treat for any fan of the genre. I simply love this show. The initial premise is a stretch but keeping Mike's secret creates wonderful plot tension for all the characters. Another plus is how each season reinvents itself by taking us outside the firm when Mike's choices put him on different paths. I honestly didn't care much for his becoming an investment banker in one season but the characters are all so fun to watch that I just couldn't stop. You can always count on Harvey & Jessica to fight with all they've got to bring home a win in spite of any number of obstacles. Seriously, who wouldn't root for them. Of course having help from the force that is Donna (Harvey's assistant extraordinaire) and the quirky, flawed, lovable Louis only adds to the delicious flavor of each episode. The cast is excellent and the writing has the perfect blend of drama and humor. I highly recommend this one.

The best legal show on television! Mike are Harvey are the best!

Took me a while to discover this show and am glad i did. Couldn't help drawing comparisons to Franklin and Bash but I think Suits just takes the crown.

absolutely awesome... the perfect mix of drama and comedy

An addictive and endearing power-lawyer series that ran out of umph after season 2. The 'will he, won't he' get caught and fired plot was fun to follow, until it became annoying. While I jumped off the Suits wagon after 2 seasons, I will still continue to ride the Harvey-Spector-is-the-sexiest-man-on-earth train. The hair, those dimples, and that god-complex - mmm mm! SUITS is smart, sassy, clever, sophisticated, timely and immensely entertaining! The new series debuted with a full 60 minute story that establishes the characters very solidly, opens pathways for many story lines, and boasts an exceptional cast of fine actors. Here is hoping it makes it as an ongoing series, especially since it is not yet another crime drama! Not that Criminal Mains, The Mentalist, Without A Trace will lose their place among the best show on television, but with all the spinoffs on the crime shows, the available choices have been dwindling lately.

SUITS is a lawyer show. Set in New York (captured, by the way, in beautiful cinematic vistas) it focuses on a very successful law firm, managed by Jessica Pearson (Gina Torres) who balances the talents of her two top lawyers, the smarmy Louis Litt (Rick Hoffman) who is a control freak, and the very brilliant but egotistical Harvey Spector (Gabriel Macht). There is a particularly appealing and very bright secretary Donna (Sarah Rafferty) and a beautiful paralegal Rachel (Meghan Markel) and last but certainly not least by any means there is Mike Ross (Patrick J. Adams) - a young lad who is extremely bright, has a photographic memory, dropped out of college because he took tests for fellow students and got caught, fell into marketing drugs by default for need of money so that he could pursue his dream of being a lawyer, and falls quite by accident into the role of being selected as associate to the brilliant but self absorbed Harvey Spector. This is the team of characters who are destined to provide fascinating substories as they interact.

The dialogue (Aaron Korsh and Sean Jablonski) is clever, bright, snappy, unclichéd, witty, and helps define the complexities of the characters. The pacing is exceptional (directors Kevin Bray and John Scott) and the series has the appearance of a high-end movie - excellent cinematography, expansive development of story in well-selected locations - but most of all this is a cast that is worthy of attention every moment they are on camera. It will be interesting to watch how Patrick J. Adams and Gabriel Macht grow into our psyches: both are exceptionally fine and provide a spectrum of the lawyer personality we haven't seen on a series before. This should be a major hit! If you like hot, intelligent lawyers ,and well written scripts this is the show for you!!

Suits is a legal drama with a fast paced script and storyline. The cast has formed a bond and it shows during their performances. These men break the law, manipulate the system, deceive their competition and always find a way to win. The show en-globes love, passion, courage, loyalty, honor, deception, lies, manipulation and pride. I recommend this show to legal drama and crime addicts.

This show actually wants me to become a kickass lawyer, because who wouldn't want to kick some ass Harvey Specter style?

LOVE THIS SHOW. I watch this show and just say Damn to the tv screen withal the backstabbing. Such a good show.

Fantastic. Just fantastic. The characters are so absorbing and quirky and REAL in a way that most serial shows don't ever accomplish, much less sustain for over four seasons. EDIT: Alright, it WAS amazing and fantastic and I loved it... and it should probably have ended. It's starting to get real repetitive and I'm rather sick of the "oh no, someone knows Mike's secret, let's do something illegal to cover it all up again." Gotta know when it's time to call it quits.

NEW UPDATE: The FIFTH SEASON has improved,majorly interesting plot twists, except that Donna is still kind of over the top ego-wise. I hope she mellows a bit.

Seems as if I am not the only one who thinks that SUITS is finally past its "best by" date. I still enjoy some of the characters, but they are all suffering the fates of people who have just too darned many life or death circumstances and close calls to believe the whole thing is still hanging together. Plus Harvey is getting on my nerves with his exacting code of ethics on some things and bendability on others.

omg I watched this like all the time with my sister, can't wait till the new season starts! Fantastic law drama with a good touch of humour and romance. At its best in the earlier seasons, with the establishing of the characters and their relationships.