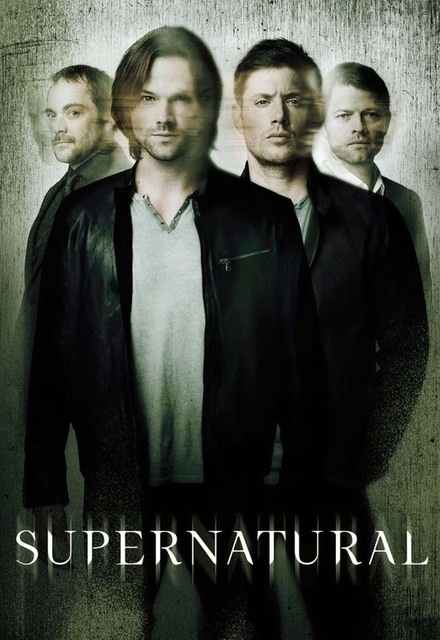 Avg Rating (0)
Your Rating
Tuesdays, 9:00 PM EST on The CW
Tracked 179,079 Times
Hiatus
15 Seasons, 320 Episodes
60 Minutes
Buy or StreamAmazonAmazon UK
Action Drama Fantasy Horror Supernatural The CW The WB Thriller
Jensen Ackles and Jared Padalecki star as Dean and Sam Winchester, two brothers searching for the meaning behind their mother's death at the hand of a demon, and their father's mysterious disappearance.
Share on:

This show has had it's fair share of problems but overall they can be overlooked as Sam 'n' Dean are without a doubt the best TV duo in existance. Sexy, smart, funny and not above taking the Michael out of themselves, Jared Padaleki and Jenson Ackles on screen chemistry is beyond reproach. When they fight, when they're friends and all the brotherly interaction is believable. Also loving both cass and crowley as the literal angel and devil on the boys shoulders, mischa collins and mark shepard who bring both humour and honesty to the characters.

From Heaven to Hell, and every where in between, Sam and Dean has been through it all. I loved it since the beginning. Supernatural will make you excited, let you down, pump you back up, scream, laugh and make you cry.

I LOVE this show!ive been hooked since season 1 episode 1.. it has action, drama ,fantasy elements, monsters all things combined awesomely :) one of the best shows in my opinion :) it made me laugh, cry and had me sitting on the edge of my chair at some points too. it really touched my heart :) family sticks together even when its not by blood :)

i'm slightly obsessed with the show.

So well made, exploring all mythologies possible in Real life mixed with a good dose of the truly paranormal. Love it love it love it!

This show is epic. Supernatural is an action fantasy horror drama involving two brothers fighting their way through ghosts, demons, angels and the foulest creatures known to the paranormal community. The storyline gets better and better, incorporating paranormal lore and ancient legends and myths. The "Windchesters" story is one of loss, pain, courage, loyalty, perseverance, faith and strength. I recommend this show to paranormal action drama fanatics. Love this series, loved it from the beginning and after 10years i'm still a big Fan.. ♥ Ps, there is comming a 11th Season, so bye bye Smallville Record and Hello Supernatural xD

An amazing action-packed show, that also features mystery, drama and romance. Definitely one of my favourite television shows of all time. Featuring the acting talents of both Jensen Ackles, and Jared Padalecki.

Dean and Sam.. when supernatural first started it was shocking and scary dealing with the things, most normal people like myself would be afraid of. however as the show progressed, the fan base grew, the show became self aware and then when the angels and demons storyline progressed, it did become more of a drama.
Dean and Sam are the go to guys, or hunters as it is referred to in the show when you have something supernatural that needs to be solved. they are a team and also brothers, doing the family business. however, like any sibling pair they do fight, and keep things from one another which i dont know why. communication is vital for anything and that predictably ends in a big fallout and going separate ways only to come back and sacrifice for each other.
the killing of the female characters leaves something that i question since it does happen every few season, so u get attached and like a character and shes expendable. not cool, yo. especially since the brothers will go to any lengths for themselves and then when it comes for others, they can make excuses and justify that it is alright, their death that came.
the show now has gone beyond that, teasing to the upcoming season of the darkness, so lets see how that goes.

I love Supernatural, it's funny, clever and original. Although since metatron it has become weak and a bit boring. i really liked season 1-7, then i got kinda tired of the show. i guess i need more fresh ideas than what they offered... still: pretty cool.

This show started off so strong, but really, please just end it already. Up to season 4 was great, now it's so cliche it's pathetic. It's the same old same old between the brothers and it's boring.

Can you get me some Dean in my life like yuummmaay. Jensen Ackles ♥33 Well this show is amaaazzinnnnng and going strong like waadduuup 9 seasons?!? I don't even want to start how they thought about this show or wrote it and all. The first season was scary as heck.. I'd probably wud of peed in my pants if i was younger when i watched it. Later on the story became much more important and tbh i didn't mind because seeing Dean's soft side was sooo cute and when he's drunk and all he is hella funny. I love this show one of the best shows out there hopefully goes on for another 20 seasons and more. :) Hooked since episode one. Can't get enough of it.

Still love watching it, even after 9 seasons! It's hard to keep the momentum up but Supernatural does a great job. It's not as good as it used to be as the last series it seems to revolve about the same thing, but it is still pretty brilliant!

I've just finished season 8 and I can safely see why the series is known as “season gr8″, it had TONS of Destiel moments, better pacing than series 7 and interesting story arcs, new mythology and plenty of brotherly bonding and case fic hilarity we know and love.

So we start off the series with THE GLORIOUSNESS OF PURGATORY. Oh my gosh, I love how Dean is so much more himself and sure of his actions in purgatory. His friendship with Benny is fantastic and so different from his relationships with Sam, Cas and Bobby. Benny has a nice amount of screen time in the series, forming a rift between Sam and Dean (as it wouldn’t be Supernatural without the boys arguing over something….) and also provinding them with some different cases, and moral issues of whether ‘monsters’ should be helped. I loved how down to Earth Benny was and how Dean could overlook his vampirism because of his friendship and actions in purgatory to save both Dean and Cas.

Speaking of Dean and Cas, this season has been FANTASTIC for Destiel moments, many of them in purgatory THAT HUG and “I NEED YOU” being amongst my favourite bits of the entire show so far!! I love how close the boys got this series and how even when Dean had his doubts about Cas throughout the series, he still was worried about where he disappeared to and tried to protect Cas even when he didn’t know entirely what Cas was up to for most of the season. Cas in turn showed true loyalty to Dean by saying “I won’t hurt Dean” and refusing to betray the Winchesters. Such amazing eye sex and touching moments between Cas and Dean this season, all the feels ♥

Meanwhile, the whole Sam/Amelia subplot plays out in parallel to Dean/Cas. I liked the sass of Amelia and her stubborn and straight talking attitude. But Overall I feel she was more of a hook up for Sam than a partner. She had too many of Dean’s qualities that he needed when there was a Dean shaped hole in his life.

Other characters of mention should include my faves KEVIN TRAN AND CHARLIE BRADBURY returning this season! They were two of the best parts of season 7 (and definitely made it stronger) and I’m very pleased they returned for several episodes this season :D Kevin Tran and his mother played a large role in the angel tablet plot line and Kevin’s status as a prophet was fully utilised and appropriately incorporated into the storyline. Some of the emotions Kevin experiences in the season reflected what Sam and Dean faced early on in their hunting career and it was interesting to see how Dean and Sam reacted to Kevin’s anger, hurt and complete dedication to hunting/lore. Charlie brought some much appreciated geekery to her two episodes this season. LARPING AND PACMAN FEVER where some of the series highlights with Dean letting out his geek side and some great comic/more light hearted episodes :)

Lots of new plot lines and additions were included this season, most of which were very exciting! The introduction of the angel and demon tablets were a great mythology story arc and gave more layers to the angel storyline, strengthening Cas’s role in the season and also giving rise to more doubts about the nature of angels. Naomi was a very grey character and her agenda was very dark for an angelic being, showcasing the continuing discontent and chaos in heaven.

The tablet trials themselves were a great way to add drama to Dean and Sam’s relationship, and it ultimately brought them closer together over the course of the season, ending on a high note where they were perhaps closer than ever before. I did feel like the second and third trials were squeezed into the later stages of the season though and more time spent on this part of the season 8 story arc would have been appreciated!

The Men of Letters storyline and the history of hunting and lore was a lovely history/family style element and I greatly enjoyed the brief appearance of Henry Winchester and how the Winchesters fitted into the history of hunting the supernatural. The Men of Letters bunker is literally THE COOLEST PLACE EVER and I am so glad that after Bobby’s house and Rufus’s cabin the boys have a ‘home’ and a place which they can call their own.

In relation to the Men of Letters, Abbadon was introduced as a “knight of hell” and a fearsome adversary to the Winchesters and well everyone else too. She has power perhaps even greater than Crowley and her true motives aren’t yet clear so I am eager to see where this strong female villain goes next season!

Crowley also had a larger presence this season, becoming the Winchesters main enemy throughout with their battles with the prophet, and the angel and demon tablets. His sarcasm and sass really aids the momentum of episodes and his varying relationships with Dean, Sam, Cas and Kevin all make him one of the most developed characters on the show - he even showed his emotional side in the finale when Sam had the power to cure/kill him and that spoke volumes about his character development over the course of the season.

Interestingly, Metatron seems to be gearing up to be the next season’s ‘big bad’ after appearing friendly (but it was too friendly, so I never trusted him) he seems to be a power hungry evil bastard and I am NOT fond of what he is doing to Cas AT ALL >:( Again, he was a latecomer to the season, and it would have been nice to hear about him previously a little more so his introduction didn’t feel squashed in.

All in all, season 8 competently introduced a whole new world of exciting possibilities and characters to flesh out many seasons to come. I wish they’d paced all these new ideas out a little bit better but overall the season had a great mythology arc, super character development for all main characters and TONS OF DESTIEL MOMENTS so its a winning season in my eyes :D