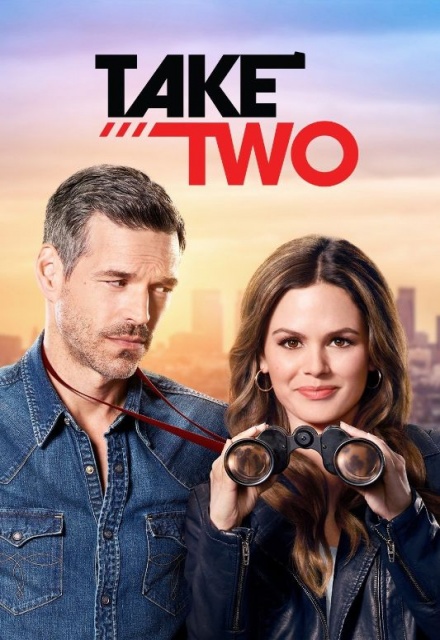 Avg Rating (0)
Your Rating
Thursdays, 10:00 PM EST on ABC
Tracked 2,910 Times
Concluded
1 Seasons, 13 Episodes
60 Minutes
Buy or StreamAmazonAmazon UK
ABC Canceled Crime Procedural
Described as an upbeat procedural, Take Two stars Rachel Bilson as Ella, the former star of a hit cop series who’s fresh-out-of-rehab following a bender of epic proportion. Desperate to restart her career, she talks her way into shadowing rough-and-tumble private investigator Eddie (Cibrian) as research for a potential comeback role. Though lonewolf Eddie resents the babysitting gig, high-spirited Ella proves herself to be surprisingly valuable, drawing on her acting skills and 200 episodes of playing a detective. When the press touts Ella’s role in solving a high-profile case, Eddie finds his phone ringing off the hook with new clients looking to hire the pair.
Share on:

It's an okay show but I have to admit I am only watching this show because of the two main actors. It's a good filler for the summer hole, until my fave shows start up again.
It actually shaped up to be a pretty decent show. So I am giving it another half star. I like the chemistry between the characters and I like the cases they solve. And the underlying story that led to the first season's cliffhanger-finale. Looking forward to the next season. Surprisingly, I think it works. I was hesitant of Rachel Bilson because she works better for romance and comedy, but I found myself entertained watching the first episode. Let's see how it evolves...

I love Rachel! She is just an amazing actress. This show had the makings for a great show. I am super sad it ended so quickly. It might have missed a bigger underlying story to make it a multi-season show.

well I did like this series... however it did have a few problemos.. I didn't feel like there was any real chemistry between the actors .. however by the end of the season just before they concluded it, I found that the series was just starting to come together.. think of light hearted entertainment and for me that was this series..

Summer Roberts moved from The OC to LA and solves crimes! That's the entire premise of the show. The police broad is a smoke stack. I’m French and for me it’s a really fun and action -packed series . The actors were well chosen

I quite enjoyed this. Infinitely better than Private Eyes which it seems similar to on the face of it, but then that's just my opinion. It usually takes a few seasons before they decide to get the main characters together but they decided to get them together in season one which I thought was a but strange. Will be interesting to see where they go with that as usually once the main characters get together the show tanks. Maybe that's why they introduced it at the same time as Eddie getting arrested for murder. Will definitely be watching season 2 when it's available.

Take two is the second show from ABC after "Deception" to be based on "Castle". The premise seems to be what 'Castle' would have been set on if it was renewed for a ninth season. But this show from Castle's creators unfortunately does not have the same characters or their chemistry to fall back on. Take two is a difficult watch but it does get better through the season. It is basically a gender swap of Castle and also probably set in the same universe but does not fare well in comparison. Surprisingly I did enjoy the last couple of episodes and wont mind a second season. Deception failed to get a renewal even though it did get better though its season maybe the same fate awaits Take two!

Delightful, although the story is similar to Castle (duh made by castle creators, probably had no new ideas). Don't see a long run for it, though Rachel Bilson is just as fun to watch as in Hart of Dixie (an yes her characters are again very similar, or is it just that she cannot act and the portrays her characters in the same way? I can't tell). still delightful entertainment

I know this show is cheesy and predictable, but I still really like it. I hope it gets renewed.

It was a decent show. Would have liked more action, but that my opinion.
Hoping it gets renewed solely on the purpose to find out how the cliffhanger ends.

watched all episodes. I understand the criticism that the storyline does not really offer exciting moments and depth. But I think it's a nice serie to watch especially the romantic tension between the main characters. so I hope that the depth still comes otherwise everyone will not watch and the serie will be canceled.
And that would be a shame it is a serie to relax and watching. Not everything has to contain extra violence or murder. We see that enough in the world. Jesus i Couleur notorious get passed the 1st Episode. Terrible!

We have seen this dynamic played out in several other shows, so I wasn't sure I wanted to watch another one. I do like the main actors so that was the reason I started watching it. It's a cute show.

Enjoying the new television show it is like Castle in reverse where she is following the private investigator because she is out of work. The two have great chemistry But I am worried if anything can ruin it its the fact they make the girl a bit ditz
in the case someone is triggered let me explain.
They make her overly happy most of the time to the point it seems she doesn't always grasp the situation while it pairs will with the man's straight guy bit. With all of the women empowerment in the media I worry they may frown on this and purposely try to sabotage it.

From one hand there is nothing to see nowadays, on the other hand the could put a little bit more effort in the dialogs and the side characters:(