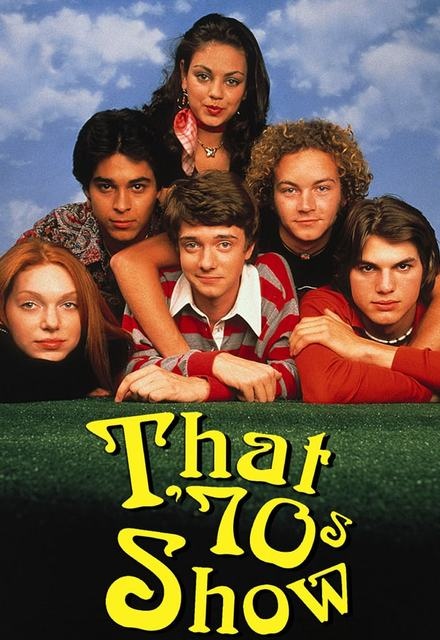 Avg Rating (0)
Your Rating
Mondays, 8:00 PM EST on FOX
Tracked 12,434 Times
Concluded
8 Seasons, 200 Episodes
30 Minutes
Buy or StreamAmazonAmazon UK
Comedy FOX Sitcom Teen Teen Comedy
That '70s Show is an American television sitcom that centers on the lives of a group of teenagers living in Point Place, Wisconsin, a fictional suburb of either Kenosha or Green Bay from May 17, 1976 to December 31, 1979. It debuted on August 23, 1998 and its final episode aired May 18, 2006. Its eight season run and 200 episode total makes it the second longest-running live action sitcom for the FOX network, after Married... with Children. That '70s Show proved to be a launching pad for the film careers of its young stars, unknowns at the time they were hired.
Share on:

Love it :) its funny, and about several subjects like love, work and other things :) One of my favorite sitcoms. I own every season on DVD and have watched the show at least 3 times. Great comedy and every season is really solid, even the final season, though it is not as good as the rest of the seasons. It really suffered without Eric and Kelso.

I used to LOVE this show when I was in high school. Now, watching it again about eight to ten year later, I just mostly find it silly. It's still entertaining, but the stories, the characters... They just seem a bit boring and lacking in depth.

What could be better then a realistic show about a group of hippie friends that hang out in one of their parents basements? Honestly with the amazing cast and hilarious events that occur how could you not love this?

If you haven't watched this you are being deprived! It's basically a classic. And I'm FROM Wisconsin so it makes it TEN times better! :)

One of the best long-running sit com's to date. No matter what other character's these actors will ever play, they will always and forever be known as Forman, Donna, Jackie, Fez, Kelso, and Hyde. Grab some energy drinks and block out a weekend, this one needs to be power watched.

This show was very unique in realistic portrayal of growing up in a small town. Always funny and with great acting and writing, the show is a pleasure to watch with the exception of the last season which was not very good (BURN!).

Amazing to watch series that has so much HAPPY . Brady Bunch is also just as great

There is nothing better to watch when you want to relax. Yes a bit older but still good. They smoke so much weed that you get mellow just by watching.

All went to shit when Eric left

I love mila kunis but I had know idea that she was on a TV show, until my auntie told me about a funny show, guess who was in it.

I binge-watched all the seasons during one summer. I would do it again. I loved the show and the characters, although now they seem out of date or old jokes, they are still funny. The best show ever, hands down!

nice show but all the jokes are to old

Another good show that went on far too long.

If you're craving some timeless, quality comedy, look no further! I enjoyed it when I was 12 and I'm still hooked 11 years laters. This was a long-overdue rewatch!

the ultimate guilty pleasure show to watch when ur high Despite the last season not being as good as previous seasons, this is one of the greatest comedy series, something about the way that it isn't politically correct, because it's from a time before that was a thing. The show has had me laughing all the way through the first7 seasons, though the 8th still had moments of genius. A show I would recommend to anyone with a taste for comedy.