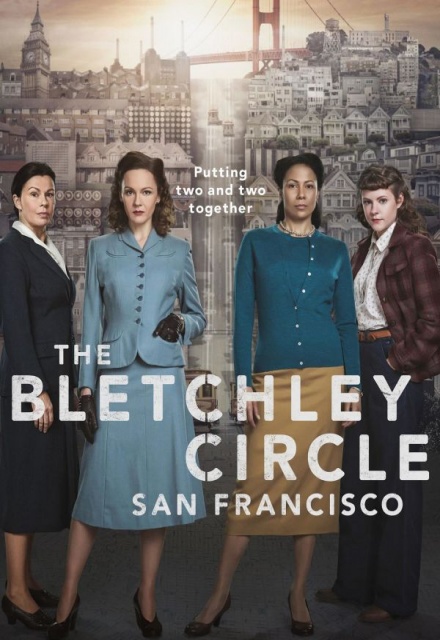 Avg Rating (3.9)
Your Rating
Wednesdays ,4:00 PM EST on BritBox
Tracked 216 Times
Hiatus
1 Seasons, 8 Episodes
60 Minutes
Buy or StreamAmazonAmazon UK
British British Drama Canceled Drama ITV
(Spin-off of The Bletchley Circle) Jean and Millie depart London for San Francisco to investigate the murder of a close friend. There they are joined by North American code-breakers Iris and Hailey who, like their British counterparts, find themselves undervalued and overlooked despite their indispensable contributions to the war effort. With renewed purpose, the code-breaking team will stay in San Francisco and continue to solve mysteries together in the Bay Area.
Share on:

Set 14 years after the excellent 'The Bletchley Circle' series from a few years ago, this is not strickly about code breaking, but is instead about a cryptic serial killer that killed in England during the war and is now linked to killings in San Francisco. Two of the women in the original series go on a sluething adventure over the pond to solve the case.

The show focuses on the trials and tribulations of women after the war, expected to go back to their place as servants to men and give up the freedom and pride they found working at high levels during the war.

After the first episode, I'm not sure if the killer is supposed to be the Zodiac killer, but they are definitely leaning in that direction with taunting letters to the police and cryptic symbols and clues in the taunts. There is also speculation that the Zodiac was two people, one older and one younger, which may turn out to be the case with this show.

Who will the killer be and how will our heroines triumph in the face of misogyny, racism and murder?

Who knows.... but the killer might be Donald Trump. I wouldn't put it passed him.

I liked it. The series moved from UK to the US and it's still intriguing to watch. Hoping there will be a new season to this one

ALL REVIEWS FOR THE BLETCHLEY CIRCLE: SAN FRANCISCO »