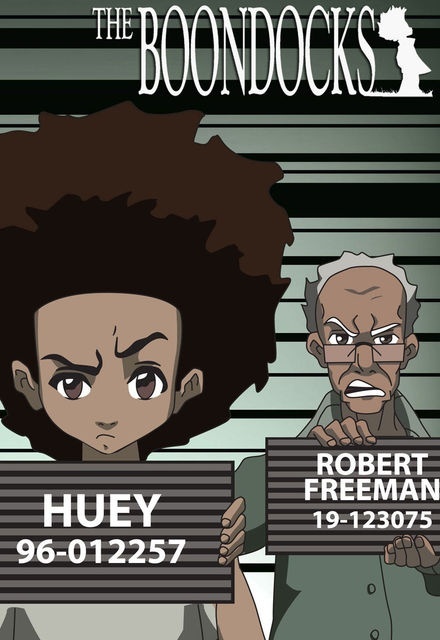 Outrageous, outlandish, and satirical as heck, The Boondocks is one of the most profound shows you'll ever watch. Constantly questioning cultural norms, this cartoon makes powerful statements on a myriad of important social issues. This show won a Peabody Award for it's ability to look critically at society and to make important statements on topics most shows are too afraid to talk about.

If you love a big, seriously politically incorrect, brilliantly funny show that delivers belly laughs of the "South Park" quantity, then this one's for you.

Wasn't really my thing, but the hubby likes it.

loved this show so happy its back

This is a hilarious adult swim with very foul language. This cartoon is racist and the jokes are low blows and in your face. I recommend this show for people who are open to all kinds of comedy and who easily don't take offense.

My friend recommended I watch this show, I wasn’t convinced that it was going to be good, but I was greatly mistaken. This show delves into the depths of controversy within society and does so through both hilarious and sombre scenes (look out for Uncle Ruckas) it questions sterotypes and really gets you thinking about this crazy world we live in. If you want a show that gives you childhood vibes because it’s animated but at the same time you want to enjoy a LOT of dark humour, this is the show for you.


P.S. Take a listen to the outro, isn’t it amazing?

I've rewatched it to many times lol!

Some of the best in on topic satire. And Samuel L voices a white guy who acts like a gangster. Pure jokes, one of the only shows that comes close to touching on what South Park can do but completely brilliant and unique in it's own right. The brain dead, every day Joe, and the intellect will all enjoy this show evenly. From the obscenely ridiculous racist commentary to the deep philosophical monologues from Huey; there is nothing in this show that won't either make your jaw drop, laugh out loud, or both.

Absurdist humor and social commentary of racism by two black preteens in suburbia that will sadly probably always be relevant. GREAT SHOW sad it got cancelled

A few funny bits, alright to watch if you're stuck for something to watch.

In my opinion, anyone that's 15+ can watch Boondock but is more of a black people show tbh, not being racist are anything (I'm Black) but I most of the time it talks about situations mostly black people can relate too. It's a hilarious show but it also touches up on the deep matters that have gone on like slavery. But overall I would defiantly recommend to watch this show if you want a good laugh:)

Now I'd like to make this clear first. I am only giving this program a 3 1/2 star rating because of the latest season. This show was genius before Aaron McGruder left it in other hands but the long loooong awaited season 4 was an utter disappointment. Shows of this nature are always going to be controversial but done right they can be damn well educational as well as hilarious. Seeing how season 4 was handled was just abysmal and in places offensive for no reason and I am NOT offended easily.

verry funny but cant seem to keep me intrested at all. The jokes are somewhat repetitive at times. The Boondocks is always a great breath of ridiculousness!