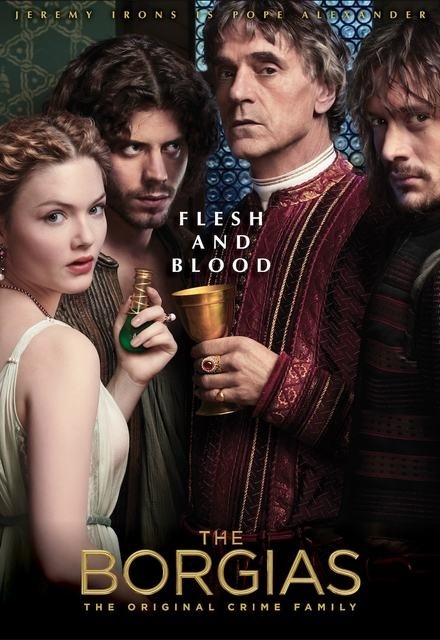 Oh dear, I don't know if it was the accents or the beautiful sets and costumes but I loved this show! I got super into it, it was the perfect amount of romance and intrigue.

A show that comes from Showtime is going to have the class, intrigue, mystery and overall sheer awesomeness that is involved with the network. The Borgias is a historical drama that made me actually root for the couple that shouldnt even be considered a couple - fans of the show know that i am talking about Caesare and Lucrezia! ;) Jeremy Irons who voiced Scar in the Lion King delivers a wonderful performance that i salute, sir. the sets, the outfits the story, intrigue, murder and betrayal and twists and turns of this show were perfect. i felt the story was going to be developed but it ended, however, well cased and everyone did their part in making it a beautiful period drama and gave a stunning insight to the Church mafia.
CD

I couldn't get enough of this show. The corruption that's brought to the forefront will make you think twice.

A brilliant dramatised adaptation of the history of the Borgias

the borgias or how to climb the stair of power
religion & morality apply only for their own purpose
so incest, corruption, plots, crimes, cheating... no boundairies

I watched first 2 episodes of this show and then first 2 eps of Borgia (dir.Tom Fontana); and I could'nt stop watching the latter(Fontana' s version ) till the end , as it is the first show that got me binging obsessively. So outta 2 stars that I've given,one is for Sir Jeremy Irons and other is for costumes. So much for an exquisite and enthralling version...go check Borgia (canal+) all season eps are in english!

Incest should not be this hot.

A great period piece. The characters are great and intriguing. I loved every storyline and I am incredibly sad it is finished. Even more so because of the unresolved stories in the end. I had some kind of withdrawal after I binged the whole series.
I really liked it. Took me a while to get hooked.
Definitely like this over "Borgia". Not to mention Jeremy Irons performance did not disappoint me since he was the main reason I watched the show to begin with. A great show about politics and power struggles with a great setting, cast, and acting! The only downside is that the show needed a closure which was not provided when the network decided to cancel it! Where is that 2 hour special to provide closure that showtime promised?!!!

Besides 'Dungeons & Dragons', my favorite film/series starring Jeremy Irons. Seriously, though, Irons spearheaded a very talented cast, with many players I didn't know before, and many I have come to really admire (Sean Harris (!!!), Colm Feore, and Gina McKee).

SPOILERS
Obviously, I'm miffed like everyone else that the series ends before we see the eventual downfall of the Borgia papal dynasty-to-be. Here's hoping Showtime eventually ends the series with a standalone movie or mini-series. I never thought I was a big period drama watcher but turns out I really like them. It took a while but I finally finished The Borgias. Not being a history buff means I wasn't hung up on right or wrong facts. The costumes, cinematography and story made it a viewing pleasure.

It's sad that this show got cancelled. I enjoyed the twisted relationships and the storylines.

This show was an absolute edge of my seat can't wait to see who's getting killed next kind of show and that is why I loved it. I loved the flirting between the brother and sister, (don't care for it in real life, but hey, this is TV!) and I knew this show would go further if only they had kept it on the air. I miss this show and wish there were more daring shows like it. The man who played Cesare Borgia, was so freaking FINE!!!! I'm going to watch the other shows that he was in. He needs to be given a main character role like that again. A very good show, historically acurate, and very entertaining. The intrigue is very well placed and followed, the actors are truly amazing (Jeremy Irons takes his papal role very much at heart and the show is all the better for it). History buff or no, this tv show will be enjoyed regardless, settle in for a holy journey to debauchery and sin. Very enjoyable stuff.

I love Historical Dramas. This is one of my top.