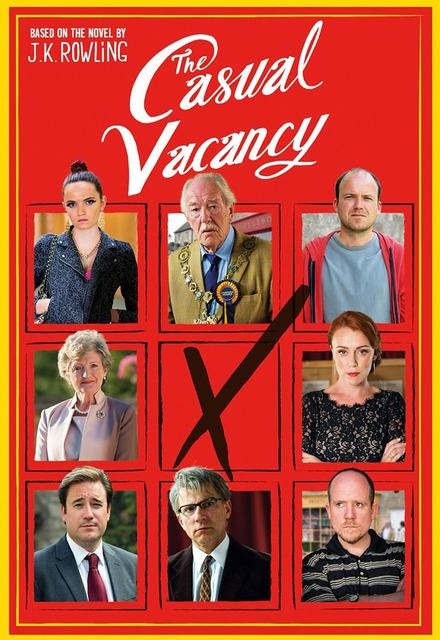 Avg Rating (0)
Your Rating
Sundays, 4:00 PM EST on BBC One
Tracked 962 Times
Concluded
1 Seasons, 3 Episodes
60 Minutes
Buy or StreamAmazonAmazon UK
BBC British British Drama HBO Miniseries & TV Movies
The Casual Vacancy centres on Pagford, a seemingly idyllic English village with a cobbled market square and ancient abbey. Behind the pretty façade however, is a town at war: rich at war with poor, teenagers at war with their parents, wives at war with their husbands, teachers at war with their pupils. Pagford is not what it first seems.
Share on:

This definitely isn't a feel good mini series, nonetheless it provides a great insight into the thoughts and feelings of the people of Pagford and highlights a serious issue that can get to your heart.

Great, quirky, wierd, spooky, brilliant. I need to read this book! The music was perfectly combined to the scenes. All the acting and filing was superb and spot on. I was glad to see actors i grew up with in a totally new light proving how great they are. JK Rowling proved she knows how to tell a story for adults and not just kids. It is a slightly tamed down version of the book but still highly gripping and involving. It deals with very real issues (drug and child abuse) that happen in and around a small British town called Pagford but which are glossed over by the self-proclaimed and superficial "elite". This is not a fairy tale and certainly does not have a happy ending but you will relate with it all the same as we can all identify with these characters, having met them in our lives in one form or another. J.K. Rowling's mastery shines true once more and although it is not a carbon copy of the printed story, fans of her writing will love this show as well. I also loved the setting (picture-perfect), the acting (spot-on) and the choice of music. All in all a good solid show- ideal to watch over the weekend (after reading the book ;) ).

its good but not as good as the book

Watched the first episode .. not gripping enough to keep me interested.

gripping suburbian drama with catchy characters and deep social criticism. the cast delivers the depths of the characters convincingly and with an inner truth that is amazing. especially rory kinnear's performance, although short, is outstanding.

As with many series based on books, the book is probably better, but it was an ok show. It's really slow and seems like it was probably better in book form. I honestly was fairly bored through the whole thing but I still wanted to see how it ended.

I couldn't read the book yet; however, it seems good-adapted.

LOVED it, the book was a great read and the show was superbly made. Would recommend it to those that love english mysteries and a small town gossip.

Wow i can't wait to see how this ends. It looks like something else ... but I cannot recall it. Enjoyable. Could this be Mr Gambons last show ?