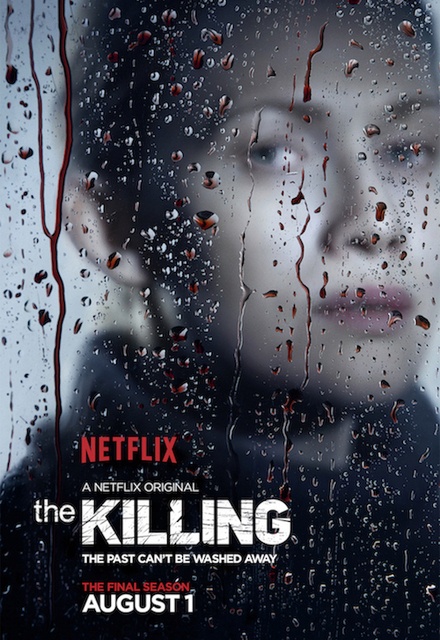 Avg Rating (0)
Your Rating
Sundays, 9:00 PM EST on Netflix
Tracked 16,561 Times
Concluded
4 Seasons, 44 Episodes
60 Minutes
Buy or StreamAmazonAmazon UK
Crime Drama Mystery Netflix Resurrected
The Killing is based on the wildly successful Danish television series Forbrydelsen and tells the story of the murder of a young girl in Seattle and the subsequent police investigation. The Killing ties together three distinct stories around a single murder including the detectives assigned to the case, the victim's grieving family, and the suspects. Set in Seattle, the story also explores local politics as it follows politicians connected to the case. As the series unfolds, it becomes clear that there are no accidents; everyone has a secret, and while the characters think they've moved on, their past isn't done with them.
Share on:

Love this show, forgot about it when it went on hiatus and now, wheeee! I have three seasons to catch up on! Love Mireille Enos.

The show is visually stunning with great cinematography; it somehow manages to make the perma-grey of Seattle varied and, in a way, beautiful. Unfortunately the technical brilliance is let down by almost everything else. The variation on the standard cop show had the potential to be great however the plot develops at such a slow pace as to almost be pointless and the characters seem not to develop in any meaningful way. Linden and Holder are two of the most frustrating leading characters I have ever come across, seeming to make the worst possible choices for themselves at every turn.
The Killing had a lot of promise and the potential to shake up the formulaic world of police shows but ends up falling far short of the mark. I would suggest giving the first two seasons a watch as this is where the show's alternative approach is at its best but beyond that, don't waste your time. Intriguing! Every time I watch this show I had to readjust my vision cause it had really dark scenes where I couldn't see a thing, but still great show, I love sarcastic Holder!!

The Killing is a mystery drama to the core. The first 2 seasons are extremely well written and are worth binge watching. The cast was well chosen and the characters are quite approachable. Once you think you know whats going on... you don't. The writers and the producers did an excellent job of making this an exciting watch.

Depressing as hell with lots of rain. Love it. :) Top notch series from beginning to end. Gritty, unpredictable, and intriguing. I found the ending to be mildly disappointing but otherwise a great series.

Satisfying conclusion to a mostly excellent program.(The qualifier has to do with the season 1 finale) one of the best crime shows out there !
this show has everything.

It's a dark complicated murder-cop show!

Top Show! The first two seasons blew me away. Really good storyarc, reasonable (yet not foreseeable) twists, relateable charakters!
Just watch it. There are not many shows I rated a 5/5.

Lessons you learn from watching this show:

1) 95% of all people smoke cigarettes incessantly, even people that quit smoking.
2) Any person of interest will be beaten or shot even though they were totally innocent.
3) Totally innocent people withhold information that would easily clear them of the crime for no good reason until its too late and they are beaten or shot and end up hospitalized.
4) Women are "emotional" and that is why they make such bad detectives.
5) One murder case can drag on for two seasons if the detectives ignore obvious clues from the first episode.

Definitely worth a watch for anyone into mystery / crime drama's. My only problem with it was the political side of the story which I personally found boring compared to everything else in the story.

This show have the life of a cat. One of my favorite shows of all time. So sad it was cancelled.

This show was amazing and should be brought back!!! Un kill it netflix! Joel Kinnaman and Mireille Enos are free now? Get em back on!

I came late to this party and ended up only watching the 1st 9 episodes of season one before I discovered the murder of Rosie Larsen would not be solved until the end of season two, and I simply couldn't take it anymore.

Plot: As stated, the 1st two seasons revolve around ONE murder case. There is no murder case in the history of murder that requires 20 HOURS of film to tell. That means exactly what it sounds like: this plot is dragged out to the nth, agonizing-est degree. There are twists upon twists which in theory should make the story interesting, but instead, because there are so many, eventually it becomes obvious that few of the twists do/will actually matter in the grand scheme of things. At one point, terrorism comes into play. And guess what? Terrorism doesn't have diddly to do with the murder of Rosie Larsen. That's what happens when your story's overwritten.

Characters: We've got a veteran female detective (Linden) and a young, male rookie detective (Holder). Linden seems like she's used to working alone. She doesn't communicate well. She doesn't like having to "babysit" this new young, dude. Oh, and she's a single mom. Yes, the writers really broke the mold with Linden's character. Holder's eager, he doesn't care about the rules and has a graveyard of skeletons in his closet, but we know deep down his heart's in the right place (get the bad guy by any means necessary, evidence be damned!). Again, really went for originality. And if these cliched archetypes of cop show standards weren't boring enough, both Linden and Holder make the most asinine choices possible every chance they get. Their behavior defies logic and is manufactured drama at its worst. For example, Linden is engaged to a man who wants to move her and her son to California. All Linden has to do is get on the plane. Literally nothing is stopping her from doing that, but instead, she just won't go. Why not? Who the hell knows? Does she not love him? Don't know. Does she not want to marry him? Don't know. Does she not want to leave Seattle? Don't know. Is she scared of having a normal, quiet life? Don't know. Is she obsessed with this case? Kind of, but not really considering at no point do we get the impression she's anything but a MEDIOCRE cop. So, she's not a great cop, she's a terrible partner, she's a terrible mother (stringing her kid along, back and forth with no stability), she's a terrible fiancee, and all for what? Dynamism, conflict, and tension? Yes, if we've all been teleported back to the year 1991 when such nonsensical writing was acceptable.