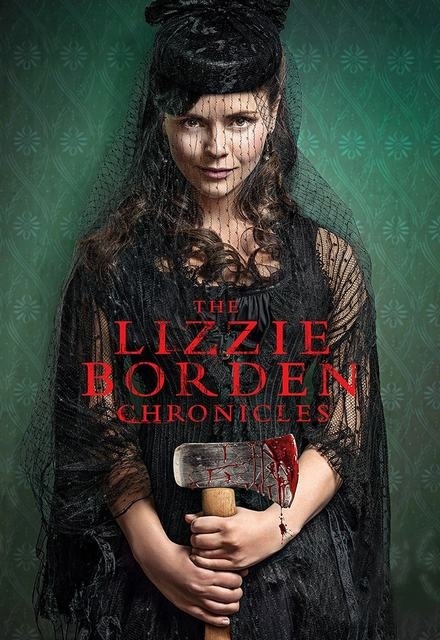 This show is gory, dark, bold, and beautifully done. From start to finish, it's a devilish delight.

A show that deserved getting axed, The Lizzie Borden Chronicles needlessly detaches viewers from acts of horror with comedic relief and odd choices in music. It's not as suspenseful or realistic as either Hannibal, The Fall, or Bates Motel.

I am a big Fan of Chistina Ricci , I loved her in The Adams Family long ago and have enjoyed PAN AM her last TV series , and her Movies I think she'd have been a good Villain on Flash or Gotham , but think if she gets good scripts should be a doozee, Lizzie Borden Took an Axe and Gave her brother 40 whacks and lets see how many more she doth wacket off !

I'm sorry but I couldn't get past the first episode. Normally I would LOVE this. I enjoyed the movie, and I love the story of Lizzie Borden. But the soundtrack was just awful and it seemed to mix with the era of this show.

I think I'll come back and try again later... maybe

The Lizzie Borden Chronicles being a limited time series is a fascinating and horrific portrayal of the events following a murder in the 19th century. The show keeps you watching by using intense scenes, unique musical choices and a wonderful cast. This is also a beautiful period piece (should also be classified as a horror show). I suggest you all give it a watch.

Bloody thirst for the dark lady.
I thought it was Wednesday adams... but not at all.
Murders are brutal, gore, awful

Interesting, but I'm wondering why Lifetime shows are so slow.

Flipping through channels is a dangerous game. Five times out of six, this digital form of Russian Roulette results in horrible television shows that are so simplistic that you question who on earth is watching something so mindless. At least that’s how I feel when seeing TV show titles like My Kid Ate What? and then being disgusted that it was so popular it got a spin-off: My Dog Ate What? Please kill me now.

With the game of “Remote Roulette” comes, occasionally, a show that catches your eye and makes you wonder, “how is this going to be done?” That is what happened to me the other day when I saw that Lifetime was premiering a new show called The Lizzie Borden Chronicles – yes, this is real life.

The Lizzie Borden Chronicles is an eight episode Lifetime miniseries continuation from, I’m assuming, the 2014 Lifetime Original Movie, Lizzie Borden Took an Ax. Now, I will say I’m all for a strong female lead, as you can probably tell by my previous reviews, and I’ve been intrigued with the Lizzie Borden trials since I was in grade school, but this show is in a whole other world.

The show stars Christina Ricci, who is known for playing Wednesday Addams in The Addams Family remake movies and starring in the former ABC series Pan Am, both of which I’m a fan. This show is somehow a hybrid of modern social norms and an 1890s small town setting – think Abraham Lincoln Vampire Hunter on the “how accurate is this show” meter.

The show begins with children singing the Lizzie Borden rhyme and informs the viewer that the show is set after the trial of Lizzie, when she is free to walk the streets. Children taunt her and her sister as they try to discuss what they will do since inheriting their father’s debts. The opening is done through flashbacks to the brutal murders of the parents and has a music overlay of modern alternative rock/dark electro-pop somewhere between American Horror Story’s opening credits and Britney Spears’ Blackout album.

Aside from the music, which was catchy but a little distracting from the setting of the show, there were some issues I had with the character of Lizzie. The character is supposed to be a young, thirty-something in the 1890s, but she is riddled with modern feminism. Now, I have nothing against a strong woman, I mean Veronica Mars is my everything and Buffy slays me (pun intended), but the character of Lizzie seems almost like she is far too feminist for the time period of the show. She felt more like a sassy schemer from the plot lines of Gossip Girl. This modernization is further demonstrated when her home is to be inspected by the police and they say she must let them in or they will come back with a search warrant. Interesting, but I’m pretty sure that search warrants weren’t around until the early 1900s, almost a decade after the setting of this story.

If you can cast aside the setting issues and over-modernization, and remember that you are watching the Lifetime network and not the History Channel, you might find the show to be very entertaining, as I did. I found Ricci to be incredibly captivating in her role as Lizzie. She played up the innocence well and yet had a creepy, dark undertone to her persona that made the show very enjoyable.

The costumes in the show were fantastic too. Lizzie was typically done up in beautiful dresses that really seemed to be fantastical and spoke to the character’s motive or feeling. Lizzie wears dark colors, even in church, which speaks to her apparent mourning of her dead parents, but also to the darkness of her character. She was also shown in elaborate dresses that featured big shoulder puffs and tightened waistlines. This alludes to Lizzie owning her femininity as well as, with the shoulders being broader due to the puffs, being more powerful, masculine, and important than her actual frame may suggest.

Something that really enchanted me was the cinematography in the show. It was great, especially for a Lifetime show. I more specifically focused on the way the characters were lit, Lizzie especially. It really played on the idea of polarity and the darkness and light that is entangled within one person.

Finally, I just really want to give credit to the tag lines of the show. I love the way they play with the commonly known elements of the Lizzie Borden case and really capture the attention of the reader, like: “She’s got an ax to grind” or “Condemned but not convicted.” Yes.

Call her "Wednesday". She will always be Adam's Family's 'Wednesday' for me. I always thought she was good. Also one of the reasons, I watched this show. I must say that I wasn't disappointed. If you prefer suspense to horror, this show is for you.

I love the casting. It's an interesting story. But the person in charge of the music should never work in the industry again. What a constant annoyance taking the audience out of the time period and the story.

This one was interesting in that Lizzie was a complete psychopath and her Sister just couldn't see it. It seemed as though there was room to grow but they cut it short. weird but not bad

Passable but the same in each episode.

A cold but seductive role for Christina Ricci playing the murderous Lizzie Borden. The mini-series had loads of potential but not enough to generate popularity. For a Lifetime show to connect to its audience (as cheasy as it sounds) it needed more romance.

I found A lot of twists and turns in this show ,it has great plot lines and I could not wait for the next episode.

Its an okay show, but has some very poor acting. The storyline is good, but the show lacks that "feel" that makes people want to watch more

Could be a good show, it has some promise to it. But the camera work is awful. Shaking every thing and unnecessary zoom in and out.
Makes my head hurt

Christina Ricci is perfect casting, fans of her, and very dark, gilded age period horror dramas, won't be disappointed.
The series is excercising a lot of license with the notoriety and character of the eponymous protagonist. The intrigues are fiction and yes, the murder scenes are graphic, but the series IS about a patricidal axe murderer who gets away with an obvious and awful crime... a character whose family history, from what is known, involved a measure of emotional neglect and external, societal limitation and judgment. The fact that the murders, and getting away with such an atrocious crime, made her a rich, and independent woman, in a time when women had very limited power, makes her a fascinating, distinctly notorious character. I watched episode one out of curiosity. Now I'm interested to see how the dark twists and politics of justice are used to allow or prevent further miscarriage of it.