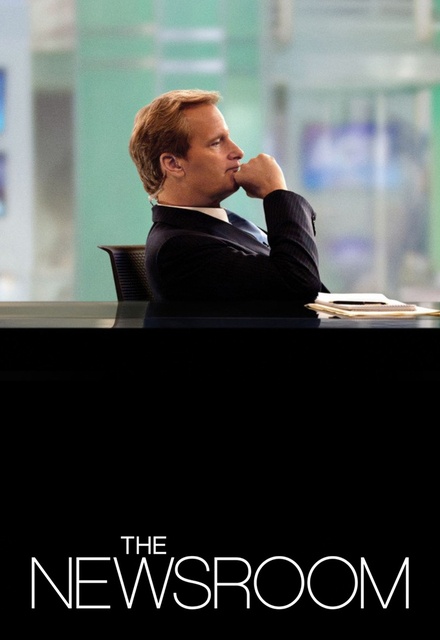 Somehow, mainstream media seems to think this show is "too didactic" - but that reeks to me of fear. Sorkin says exactly what people need to hear; it's time to step back, move forward, and let the professionals do their jobs. He's fantastic at portraying both sides to all key debates; I love the energy and direction of each season, so different and nuanced. A pleasure to watch.

Will miss this show a lot

Relive all the excitement of watching the news without any of the hassle of it being relevant or true.

Oh so good! This is TV at it's finest. The dialog is fast-paced and quick-witted. Brilliant acting combined with interesting and thought-provoking story-lines makes this an award winning show. It tries not to be biased, but it's fictional, so put your personal political views aside and enjoy the best tv has to offer right now.

One of the best programs ever! If you liked the West Wing, you'll love The Newsroom. It's superb, the writing, the cast, production values, everything and everyone isat the top of their game. It's also so informative in an entertaining way. Just watch for Jeff Daniels incredible acting but the entire cast is pitch perfect. Wow!

This is probably one of the most intelligent shows I have ever come across. It is something that I can watch, watch again and come in the next day in the office and talk about. It is cleverness served on a plate.

All I can say about this amazing show is - you have to watch it. The acting - Superb! The story lines - Superb! the lighting, editing, directing, everything about this show is top notch! It's the show I rave about to people who have no interest in my 'niche' viewing (horror, sci-fi etc). There are no big twists and blow outs in this, just perfectly paced dramatic stories with a few ongoing threads to tie the whole thing together. That said, many of the story lines are hard hitting and as they reflect directly modern news stories we have a line of contact with the on-screen themes. Well done absolutely everyone involved in this show - you nailed it.

one of the best shows ever everything in it is awesome ,in my top 15 What a brilliant show! I didn't think i would like it,but then i watched it and i was amazed. The opening scene got me hooked. The characters are so interesting and yet normal. It really brings an interesting view point at news and the people behind its reporting. Easily one of my top 10 shows.

I'm so disappointed that it's ending so soon. It's the best show on TV; I can't recommend it enough.

Great insight into past major events of the decade. Perfect balance of sincerity and humour throughout the series. Striking personalities. Highly recommended! A very intelligent show! It's really fast paced and a few years back so that they can use actually new stories. Unfortunately it is cut off after 3 season... but that is probably because it's too smart of the gen pop or no one has interest in the life of journalists, or maybe even conflicting views to the writers on current stories.

The Newsroom is a political drama about the inner/outer going of the news and the veil in front the American people. The writing is witty and show touches topics that are known as taboo or restricted by common television shows. Mostly though the show revolves around what actually happens when your watching the news in the backroom of the studio.

Wills first speech is one of the most truthful and daring pieces of writing I have ever heard on television. Loved this show, from start to finish it has been fantastic, the drama, and the belief in journalisitic integrity really motivated me to keep watching. The premise that in this day and age we are often not informed, and the stations efforts to change that were an impressive struggle.

personally i was never one to be interested in thinking shows, or anything having to do with current affairs or politics- if i watch tv, i want it to be light lol. BUT with that being said, i was recommended this show by a friend and i must say it had be glued. they were able to pull me someone who's not usually into this genre into keeping up with the show until the end. They presented the stories in a very unique way which made it interesting to watch! This is one of the few shows that you have to pay very close attention to 100% of the time or you might miss something. You won't necessarily get lost and not know what's going on but you will miss out on something clever that shouldn't be missed, and there's nothing less clever than not getting something clever. That's almost embarrassing. The dialogue is quick and witty, which is typical Aaron Sorkin, and the acting is good..? I always feel strange commenting on acting. The only time I notice the acting is if it's bad, which it's not here. Everybody does a good job. Oh, except maybe for Olivia Munn, but she's super hot and sorta new to acting so I give her a pass. If you've read negative reviews about this show you should disregard them and listen to me. Give it a shot. Oh wait, I don't think I actually said something review-ish. I love this show. I would have its babies. Typical sorkin show - simply as good as it gets...

it´s the last of a long series of high quality shows like the west wing and 30 rock... to bad it´s concluded now after 3 seasons. but all good things come to an ending some time.

let´s hope for a new show to meet those standards Brilliant. The opening music tells you that this is a brilliant show. Just like in the film "Shawshank Redemption". Well written. Covers real news events and had a great back story. I beleive it has finished. A real shame.